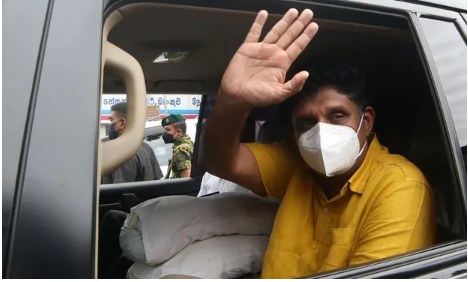 Sri Lankan opposition leader Sajith Premadasa has said he will no longer run for the presidency. Photograph: Tharaka Basnayaka/NurPhoto/REX/Shutterstock

Sri Lanka’s main opposition leader, Sajith Premadasa, has withdrawn from the presidential race and thrown his support behind a rival candidate, presenting a significant challenge to prime minister Ranil Wickremesinghe’s bid for the executive role.

In an announcement made on Tuesday morning, Premadasa said that “for the greater good of my country that I love and the people I cherish, I hereby withdraw my candidacy for the position of president”.

Premadasa instead pledged his support for Dullas Alahapperuma, the candidate from a breakaway group of the ruling Sri Lanka Podujana Peramuna party (SLPP).

The decision to withdraw from the presidential race is believed to be driven in part by the tough political future that any president who takes on the role now faces. The new government, which is proposed to be a cross-party unity government, is likely to only last six to eight months until the country can afford to go to parliamentary elections. Presidential elections are not due till November 2024.

Premadasa’s support brings with it all the votes from his opposition Samagi Jana Balawegaya (SJB) party. It significantly improves Alahapperuma’s chances of beating Wickremesinghe, the prime minister and acting president who will run as the SLPP’s official candidate in the secret ballot, which takes place in parliament on Wednesday.

It will now be a three-way vote between Alahapperuma, Wickremesinghe and leftist leader Anura Dissanayake, who were all formally nominated by legislators in a brief parliamentary session on Tuesday morning.

Both Wickremesinghe and Alahapperuma are considered controversial presidential candidates by the public, due to their close association to former president Gotabaya Rajapaksa, who was forced to flee the country and step down last week after mass protests.

It is likely to be a tight race. Wickremesinghe has the backing of the majority of the ruling SLPP, who have the most seats in parliament. However, according to those close to Alahapperuma who spoke to the Guardian, the support of the SJB – and other opposition parties likely to follow – means they now believe they are assured of enough votes to beat Wickremesinghe.

Those close to Alahapperuma said that a deal had been struck whereby Premadasa would be prime minister, and SJB MP Harsha da Silva, who is an economist, would be finance minister in a unity government, under Alahapperuma as president. Three days ago Alahapperuma promised to form “an actual consensual government for the first time in our history” if he won the ballot.

Alahapperuma, a former journalist, served as the minister of mass media in Rajapaksa’s cabinet for over two years, and was part of the SLPP government that is held responsible for driving the country into its worst economic crisis since independence.

Public protests against Wickremesinghe have been particularly vociferous. A six-time prime minister, he took over as a caretaker prime minister in May and was swiftly accused of propping up and protecting the Rajapaksa family, and, after the president resigned, taking on presidential duties without any legitimacy. His private residence was burned down and his prime ministerial home and offices were taken over by protesters last week demanding he step down.

Wickremesinghe caused further outrage by using his powers as acting president to declare a state of emergency on Sunday night “in the interests of public security”.

Meanwhile, Sri Lanka’s economic situation continues to worsen, with a lack of fuel and cooking gas and more food shortages likely in the future. The new president would also have to oversee a government composed of usually opposing political parties, and will be ruling at a time of political turmoil for the country, with a mass protest movement – known as the aragalaya – mobilised on the streets and calling for political accountability.

On Tuesday, across the commercial capital of Colombo, mass protests demanding Wickremesinge’s resignation were planned by students and protest groups.