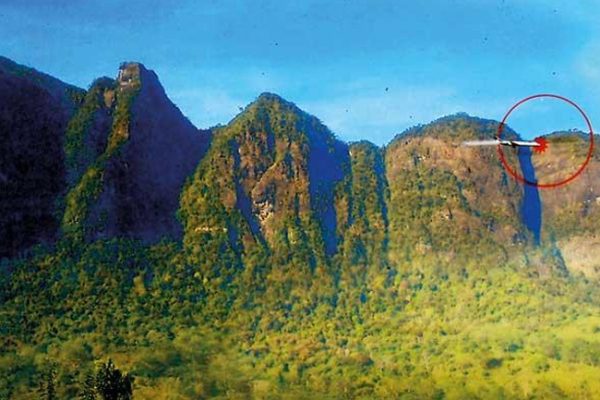 Today marks 48 years since the Martinair Flight 138 plane crash, which is considered to be the deadliest plane crash in Sri Lanka.

During December 1974, when the Hajj was in full swing, the largest pilgrimage movement in the world, with millions of devout Muslims travelling to Mecca every year, the chartered flight was carrying 191 people aboard when it crashed into the Sapta Kanya mountain range, also known as the Seven Virgins.

The DC-8 55CF flight that was owned by Martinair of the Netherlands and leased by Garuda Indonesia to fly the Hajj charters was used for the flight that departed from Surabaya. The aircraft was planned to take off from Surabaya, Indonesia and stop over for refueling at Colombo, Sri Lanka and arrive at its destination, Jeddah, Saudi Arabia afterwards.

The aircraft had impacted in this area resulting in the destruction of the fuselage and wings. Ruptured fuel tanks had started a fire in the vicinity, and the wreckage was scattered over an area of four-square miles.

The search parties, who took several days to scour the area, eventually found a scene of utter devastation. There were no survivors.

The crash remains the deadliest in Sri Lankan aviation history and the third-deadliest involving a DC-8, after Arrow Air Flight 1285 and Nigeria Airways Flight 2120. At the time, it was the second deadliest aviation accident, after the loss of Turkish Airlines Flight 981 which occurred earlier that same year.

According to the investigation’s findings, the accident was caused by controlled flight into terrain (CFIT), in which a functioning aircraft collided with rising ground owing to uncertainty about its true position, Reuters had earlier reported.

The investigators also found the black box (flight data recorder) and the Cockpit Voice Recorder (CVR). It was revealed by air crash investigators that the co-pilot had flown the plane at the time of the accident.

The chief pilot was Captain Hendrik Lamme who served as a pilot for the British Army during World War II. First Officer Robert Blomsma was his co-pilot. He had mistaken the lights at Laxapana for the landing lights at Katunayake and lowered the plane. The plane had then hit the Sapta Kanya rocks and exploded.

The remains of the victims were buried locally at the foothills of Sapta Kanya, with appropriate funeral rites being conducted. One of the bodies of the victims of the crash, who was an airhostess of the concerned flight, was taken back to Indonesia.

Norton Bridge, the closest town to the crash site, also has a memorial: one of the tyres of the DC-8 mounted on a pedestal outside the Police Station. The text reads: “Martin Air 1974-12-04 killed 191, 10:10 pm crashed on virgin hills. Dutch Airline Holland” with a painted flag that appears to be that of the Netherlands.