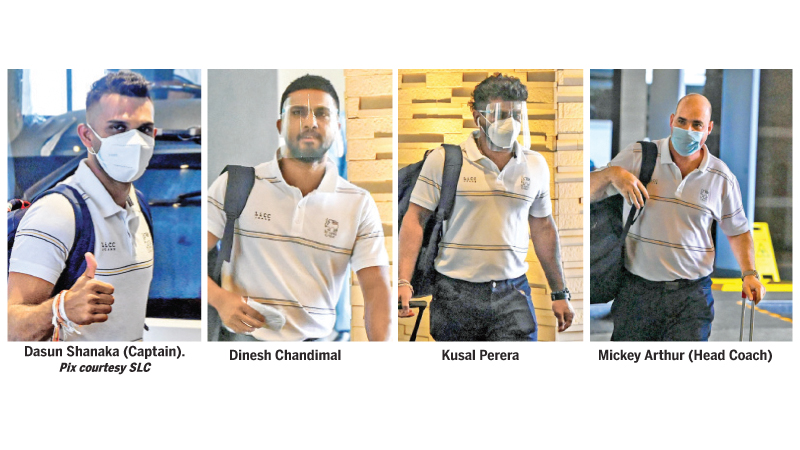 Sri Lanka’s white-ball Captain Dasun Shanaka expressed his confidence of making an impact at the ICC T20 World Cup as the team left for Oman for a two-match series yesterday.

Sri Lanka’s departure was originally scheduled for Sunday but had to be put off by one day due to a cyclone situation in Oman where all flights to and from Muscat were suspended due to bad weather.

Shanaka believes their two T20 games in Oman will be good preparation and will provide the opportunity to test their skill level ahead of the more important event in the United Arab Emirates.

“I think the two matches in Oman will be important for us because that will give us a chance to warm-up and acclimatise to the conditions before the mega event.”

Shanaka also insisted that their plan is to move up step by step and to top the group by winning all their qualifying round games before the main tournament.

“We had some good preparations at home and our confidence is very high and we want to progress step by step and win all three matches in the qualifying round.”

Sri Lanka will play Oman in two T20 matches on October 7 and 9 in Al Amerat before they travel to the UAE for the World Cup Qualifiers.

Sri Lanka will play Bangladesh and Papua New Guinea in the official warm-up games ahead of the World Cup, which starts on October 17.

Meanwhile, Sri Lanka’s two official warm-up games, organised by the ICC will be played on October 12 against Bangladesh and on October 14 against Papua New Guinea. Sri Lanka will start their World Cup campaign in the first-round – Group ‘A’ against Namibia on October 18 followed by games against Ireland (20) and Netherlands (22).