The country is already wracked with shortages. The social order may shatter if the economy isn’t infused with cash soon. 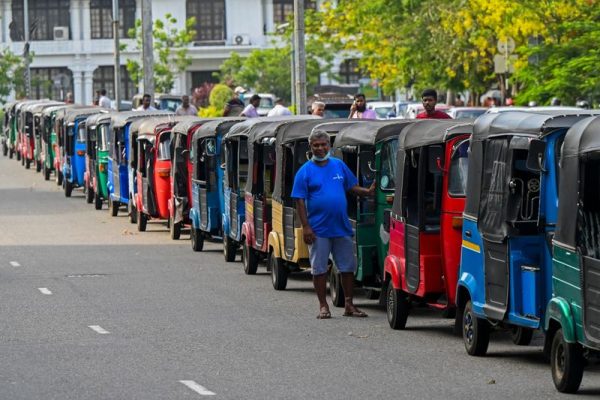 High school teacher S. Jeeva has spent two days in the baking sun lining up for cooking gas in the north of Sri Lanka’s capital. He’s been standing with thousands of others waiting for a delivery that, so far, hasn’t come. Meanwhile, many of his students, who will sit for important national exams Monday, have joined protests against the government at the waterfront along Colombo’s iconic Galle Face Green.

Both are symbols of the economic and political crisis gripping the nation — the result of decades of corruption and financial mismanagement that pushed the country to default on May 19.

It is, Jeeva says, his students’ democratic right to protest and demand a better government. Daily life has become such a struggle that it is impossible for them to study. “How can they memorize their material if they have no lights, no power, no fuel to get to school,” the 32-year-old language teacher told me. An endless row of empty blue LPG gas cylinders lines the street next to him. These teenagers should be thinking about their future and preparing for university — instead they are worrying about how the island nation will ever emerge from under its pile of debt.

What happens in Sri Lanka matters way beyond its borders. Global markets see it as a bellwether for a raft of potential defaults across the developing world as countries face a growing, post-pandemic debt burden.

So what does a country in default look like in 2022?

Armed soldiers are on the streets and there’s days-long queues for gasoline and cooking gas. Harvests are down by 50% because farmers either cannot afford to cultivate crops, or they’re only growing enough for themselves because there’s no fuel to transport what they’ve produced.

Pharmacies are running out of medicine; and hospitals are dangerously short of lifesaving drugs and devices. Incomes are shrinking and inflation is accelerating above 30%. Parents are eating just one meal a day so their children can have three, while doctors report that patients are rationing essential medicines for serious conditions like heart disease and diabetes.

There’s also growing unrest — protesters may not be burning down the family homes of the ruling Rajapaksa clan as they did on May 9 — but there are daily demonstrations throughout the country calling for the resignation of President Gotabaya Rajapaksa (his brother Mahinda stepped down as prime minister on May 10 after that deadly violence.) Police and security forces are pushing back with water cannons and tear gas. It’s a tactic that risks tipping the country further toward a broader rebellion.

How did Sri Lanka go from being named by Lonely Planet the world’s best travel destination for 2019 to nearly running out of foreign reserves and defaulting on its debts? The warning signs were there from the moment the powerful Rajapaksa clan retook control of the country following a sweeping election victory in November 2019. Their divisive dynastic politics, combined with questionable financial decisions — including heavy capital-market borrowing that now accounts for some 38% of the debt — go a long way to explaining its path to ruin.

Yes, the pandemic was a disaster for the tourism-reliant economy, and so too were the deadly Easter Sunday bombings in 2019 that ushered in a return of the Rajapaksa dynasty, but the rot had set in well before that. Sri Lanka’s interest payments on decades of borrowing are now almost equal to the principal, as political economist and senior lecturer at the University of Jaffna, Ahilan Kadirgamar, noted.

Importantly, Sri Lanka has lost its agency — with the International Monetary Fund, the World Bank and its bilateral lenders, China, India and Japan — if it ever had any to begin with. Kadirgamar says the country has never set its own terms for its development: It has always been at the mercy of external powers. There have been 16 IMF agreements since 1965. “This time it is much more desperate,” he told me. “We cannot even pay for the next shipment of fuel even though the ship is sitting outside our port.”

There are many other emerging-market economies with similarly unsustainable debt that are facing the possibility of default, says Kadirgamar. “Things are unraveling across the globe, with the disruptions from Ukraine and Russia on a scale we have not seen in recent history.” The international community is watching the situation and wondering: Can Sri Lanka’s crisis be solved via a framework applicable to other countries?

In South Asia, Pakistan is teetering on the edge economic peril. If the government doesn’t increase fuel prices, it is in danger of defaulting in just three months. It needs an IMF program to avoid this eventuality. The World Bank noted in March as many as a dozen developing economies may be unable to service their debt in the next year. The biggest challenge for these nations, it says, is sovereign debt restructuring, just like Sri Lanka.

The Group of Seven economic powers announced their support for debt relief efforts for Sri Lanka on May 19. Assistance may also come up at the Quad meeting in Tokyo on Tuesday, where the leaders of the US, Japan, India and Australia will hold talks on issues of regional concern. In the meantime, Sri Lanka is negotiating with the IMF for a bailout that will help it negotiate debt restructuring with its creditors. The country has previously said it needs between $3 billion and $4 billion this year to pull itself out of crisis, but the true extent of its debt has yet to be exposed.

Only last week, new Prime Minister Ranil Wickremesinghe (in his sixth time serving in this role) revealed a previously undisclosed debt of $105 million to a Chinese bank that had also fallen due. That means, as Lakshini Fernando, the senior vice president and economist of Asia Securities, told me, Sri Lanka actually defaulted on $183 million, not $78 million as previously thought.

In the short term, Fernando said, the situation is only going to get worse, especially for daily wage earners who are most vulnerable to inflationary pressures. “The only way the entire population is going to simmer down is when there is gasoline available and no more food shortages, and that is not going to happen any time soon,” she said. But because Sri Lanka is such a small economy, a large and immediate infusion of US dollar aid could quickly stabilize the situation.

Then it will be up to the government to ensure the structural reforms are in place to ensure Sri Lanka does not find itself back at the IMF for the 18th time. And on a global scale, the international community will need to step in to try and stop the domino effect of the nation’s default rippling through any more emerging economies.