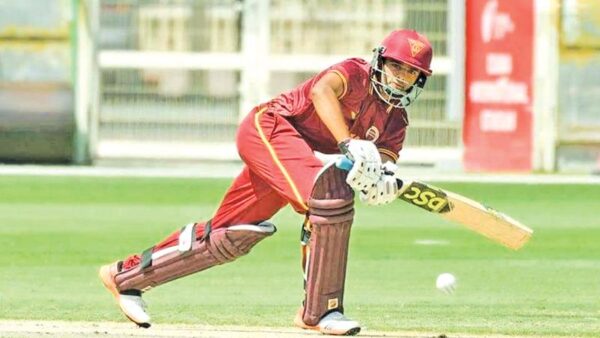 A Sri Lankan born teenager, Dhanitha Sandesh, is going great guns in Qatar where he landed at the age of one year and nine months and then rose up the ranks to become a promising cricketer. 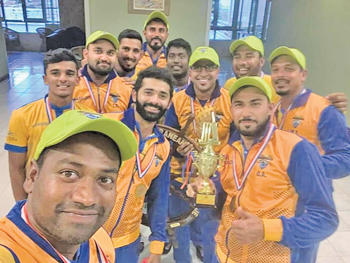 Sandesh initially cut his teeth when he joined the YCA Cricket Academy in Qatar at the age of 11 and then moved on to enroll at the Stallion Cricket Academy in 2016 and toured the United Arab Emirates (UAE) and made a maiden half century 64 in 54 balls against the famous Dessert Cubs Cricket Academy to be adjudged the best batsman in the Under-15 age group.

In the following year Sandesh bagged the best batsman’s prize on a tour of Oman and in 2018 found himself back in the land of his birth touring Sri Lanka for a series of matches.

He scored 34 against the BRC Academy and followed it up by making 52 against St Anthony’s College Katugastota. Sandesh continued his run-making form and made 47 against Ranabima Royal College Gannoruwa, Kandy and 53 against Vidyaloka College Galle and took the best batsman and player of the tour awards.

Impressed by his talents Sandesh was offered a scholarship to join Warriors Cricket Academy and the Warriors Cricket Club which is one of the best clubs in Qatar where it helped him improve his skills and got the chance to play in the Premier Diviasion which is the highest and the best club cricket division in Qatar.

The Warriors Cricket Club owned by an Indian, Kushal Kumar, gave him all the encouragement and there was no looking back for Sandesh.

Returning to Sri Lanka this time with the Warriors in 2019, Sandesh made 47 against the Under-19 team of St. Anthony’s College, Katugastota as the youngest player in the side at age 15.

Back in Qatar, Sandesh continued with his exploits in the T20 format playing in the senior A Division and once again returned to Sri Lanka in 2020 on a scholarship to play for the Asian International School in Colombo and scored 87 in 40 balls against Leeds International School and 87 in 71 balls versus Gateway College.