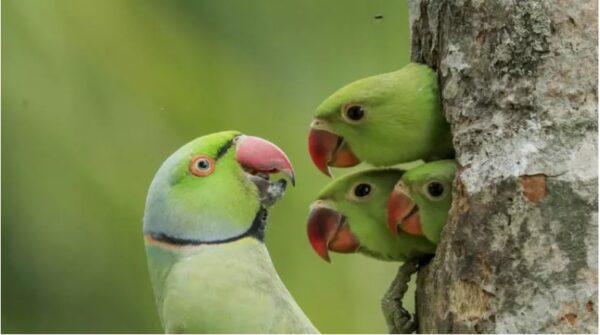 ECONOMYNEXT – A photograph of a parakeet feeding three chicks peeking out of a nest holeshot by a 10-year old in Sri Lanka during the Covid-19 lockdown has been highly commended in the UK Wildlife Photographer Awards 2021.

UK’s Natural History Museum had conducted the competition for 57 years.

Gagana Mendis Wickramasinghe had been watching the rose-ringed parakeet family in their nest in a dead areca nut tree in the garden.

In 2020, during the long days of an island-wide lockdown, Gagana and his brother had been watching the parakeet couple. The male had brought food for his mate to eat while she incubated the eggs, and later feeding the chicks.

There had been five chicks in the next.

On August 31, the jury of the competition released 16 photographs as ‘highly commended’ entries of this year’s competition.

“It was the overall quality of entries that took us by surprise,” Roz Kidman Cox, Chair of the judging panel said.

“With most travel plans canceled over the past year, photographers seem to have spent extra time considering what gems to submit.”

The organizers said this year’s competition attracted over 50,000 entries from 95 countries.

This competition does not have an age limit.

A group of Cheetahs swimming in flood-swollen river by Buddhilini de Soyza, from Sri Lanka/Australia was also commended. She had taken the picture in Talek River in Kenya’s Maasai Mara.