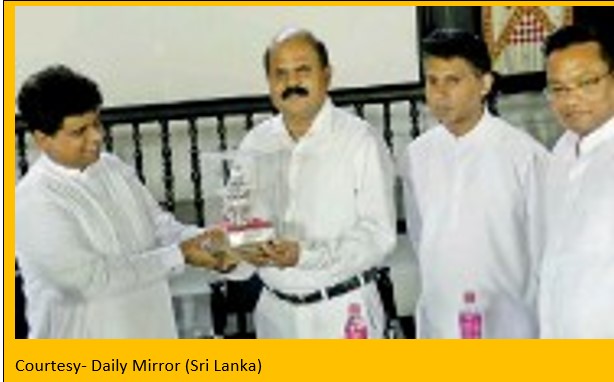 Something to be proud of as Sri Lankans at a most depressing time globally due to the COVID pandemic, and the inability for tourists travel to Sri Lankan at this very juncture, but not for very long.

Diyawadana Nilame Pradeep Nilanga Dela said that the Maligawa, or as internationally known as Temple of the Tooth has earned the first position which was ranked 150 in International Tourism, a jump that will bring in more tourists for sight-seeing and worshiping this holy place in Kandy, known as the ancient Hill Capital of Sri Lanka.

The Nilame said that this promotion is due to utilization of modern information technology.

Travellers and tourists across the globe ranked India’s Taj Mahal among the first three landmarks in the world, including Eiffel Tower and Great Wall of China.

These iconic sites have been surpassed and Temple of the Tooth in Kandy has been selected as first prime site and landmarks in Asia for Tourism.

Sri Dalada Maligawa (Temple of the Tooth) was built by King Wimaladharmasuriya to house the holy tooth relic of Lord Buddha.

After the death or parinirvana of Gautama Buddha, according to the legend, the tooth relic (left upper canine tooth) was preserved in Kalinga and smuggled to the island by Princes Hemamali and her husband, Prince Dantha on the instructions of her father King Guhasiva Hemmamali. Hemmamali, hid the relic in her hair on the way to the island.

The Dalada Perahera the most attracted pageant visited by many tourists during the months of July/August referred to as month of Duruthu, is believed to have begun immediately after the holy relic was brought to Sri Lanka, during the 4th century CE.

The traditional perahera was first created for the Princess Hemamala and Prince Dantha when they arrived in the island, according to legend.

Presently the tooth is supposed to be growing on an average length and has increased four times the length of the average human molar tooth.

It is believed that the slow growth is related to the special powers, according to Thomas Meier, a monk at the Lu Mountain Temple, in the US. by the name of Xian Jie.

In the year 2019 a total of two million tourists arrived in the island and was ranked 103rd in the world in absolute terms. There are 8 World Heritage Sites in Sri Lanka declared by UNESCO.

Taj Mahal on the other hand was considered one of the seven wonders of the world and renowned for its architecture and the aesthetic beauty.

According to TripAdvisor’s 2013 Traveler’s Choice Attractions Awards, Taj Mahal was ranked third in the list of top 25 landmarks.

It is hoped that now that the Sri Dalada Maligawa has earned the prime position and ranking number one in the Tourist industry, is sure to bring in more tourists to our little island, now struggling to survive because of the COVID endemic, where tourism has come to a halt.

Presently, Sri Lanka is open to visitors, including tourists from most countries, but will need to acquire a visa, health insurance, and present a negative COVID-19 test result taken no longer than 72 hours before their trip.