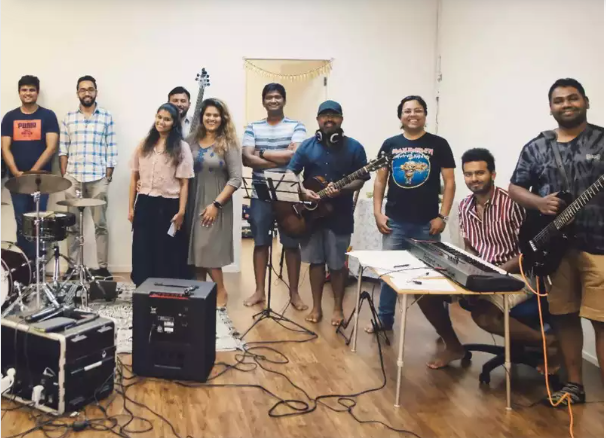 The Moksha Base band, based in New Zealand, released their new Tamil single En Uyirae recently. Musicians Shankar Narayanan and Sivakumar Sangameshwaran, who migrated to New Zealand from south India, started off as individual performers back in 2010 and formed a band in 2012.

They have performed at Tamil Community events in Auckland and in over 100 shows, which include their own live concerts, music festivals, community gatherings and more.

En Uyirai is composed by Shankar Narayanan and guitarist Prasanna Kumar. Lyrics written by Dinesh Kumar and Aswathy Sasidharan take the center stage with a melodious lullaby-like tune. “We’ve had the opportunity to get Keba Jeremiah involved by contributing classical guitar and bass in this track. We feel we’ve finally hit the sweet spot with this track and are happy to share this with all the Tamil music lovers out there,” says Shankar Narayanan.

The band’s music includes their own compositions, cover numbers, and classical fusions in western, hip-hop, rock, and Bollywood songs to name a few. They have composed over 10 original songs and have released four original music videos since October 2019 in English, Tamil and Malayalam.

“We have released a few singles over the years, and plan to release our first debut album soon. We are all busy with our jobs and family life… however music is our passion and we thought ‘Why not release an album in 2023’. We’ve written enough songs for an album and now we’ve started to put them together like a jigsaw,” he adds.

They are planning to include songs in Tamil, Malayalam and Hindi and will offer a bit of everything in rock, easy listening and even sufi.