Somawathiya the Buddhist Oasis of Polonnaruwa – By Deshan Josep 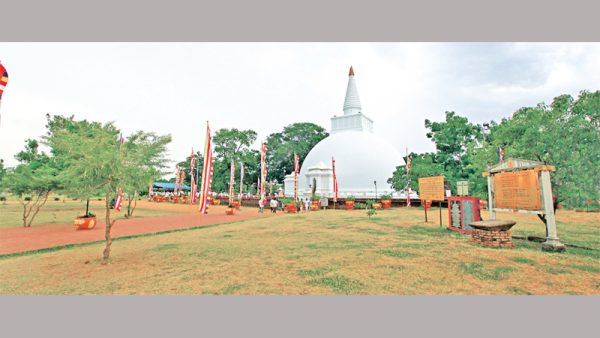 The Buddhist history of Sri Lanka is fascinating. Today I am writing about one of the most important spiritual sites in the domain of Buddhism. I first visited Somawathiya Chaitya as a child, and had limited understanding of its religious significance. On my second visit I was able to witness the beautiful aura around this magnificent Buddhist

edifice and was impressed by the faith of hundreds of pilgrims gathered here. Before we talk about this awe inspiring stupa which is nestled in the dense wilderness, we must pause to appreciate the political and cultural importance of the once glorious kingdom of Polonnaruwa in ancient Sri Lanka. It is recorded that Polonnaruwa was a great city which came into prominence during its brief period of 2 centuries in Sri Lankan history, being second only to the regal city of Anuradhapura in our island’s glorious history.

Polonnaruwa today is a showcase of the great ancient Sri Lankan architecture dating back to 12th Century AD, which was interwoven with many Buddhist monasteries and monuments which were built by the prudent King Parakramabahu I. Later, King Nissankamalla (1187-1196 AD) from Kalinga dynasty also had contributed to the development of many buildings and monuments in Polonnaruwa. During the Anuradhapura period around 1st to 6th Century AD, there have been agricultural developments with irrigation work and constructions such as Elahera canal, Minneriya tank, Kaudulla tank, Giritale tank within the fertile Polonnaruwa area.

King Parakramabahu I, is considered by historians as the greatest King who ruled Polonnaruwa during the Polonnaruwa era for 33 years from 1153-86 AD and it had been a prosperous time for the entire nation. It was a time with numerous architectural engagements which one can still see even in the present time. He developed the city with architects and technicians brought down from India and their influence can be seen from many well preserved sites existing today.

The most powerful ruler of the time – Parakramabahu the 2nd who vanquished Magha, started the restoration of Polonnaruwa, but he established his base at Dambadeniya. It is said that the area around the Thuparama in Anuradhapura was in wilderness when his son Vijayabahu the 4th started the restoration at Anuradhapura. The “Culavamsa” states that the latter assigned the protection of the city of Anuradhapura to Vanniyars or forest chiefs; proceeded to Polonnaruwa and restored it as well before leaving for his capital Dambadeniya. Location on the banks of the Mahaweli made it a suitable area for irrigation and agriculture.

The main centres of power, Anuradhapura and Polonnaruwa were located in the administrative heartland referred to as ‘Rajarata’. The thriving economy of agriculture-based Rajarata was supported by an efficient reservoir system which is testament to the wisdom of our ancestors. The notable factor is that for nearly eighteen centuries, political, economic and social administration was centred around Rajarata. During the time when Anuradhapura was the capital of the country, Thopa, Minneri and Giritale tanks had been built in the Polonnaruwa region. It is assumed that the agricultural development brought about by these tanks resulted in the migration of people to Polonnaruwa. The Somawathiya sacred area (once known as Somapura) is presently known as the Somawathiya Vihara and situated at Minvila about 50 km north-east of Polonnaruwa consists of a stupa and a few other monumental remains. There are two access ways to the site, from Minneriya via Higurakgoda to Sungavila, and the other from Polonnaruwa to Sungawila. The Somawathiya natural reserve and wildlife sanctuary is under the purview of the Department of Wildlife Conservation. It is 37,645.5 hectares and was established first as a wildlife sanctuary in 1966 and as a national park in 1986. It is one of the four national parks belonging to the Mahaweli Development Project.

In the 1940s, a group that was newly settling into this isolated area had witnessed luminous rays, similar to those emanating from the enlightened Buddha, glow from the position of a large mound. They had duly alerted the authorities. After examining, archaeologists were amazed and recognized it as the Somawathiya Chaitya in 1947, which was considered lost for nearly 8 Centuries. The revelation of this sacred Buddhist site in this mysterious manner further augments the devotee’s faith. There is an oral tradition of a lone monk whose name is said to be Ven. Sirimalwatte Piyaratne Thera walking in the dense jungle, when a ray of light guided him, through the forest to the location of this ancient stupa. The Somawathiya historical site is located 10 km ahead of Sungavila. Further, a branch of the Mahaweli River runs through Sungawila. On the basis of the available archaeological evidence such as Chathtra stone (chatragala), moonstones (sadakadapahana), balustrades (korawakgala), and guard stones (muragala) have been dated to the Second-Century BC.

Today Somawathiya is popular among thousands of pilgrims for three main reasons. Somawathiya holds the right Tooth Relic of the Buddha existing in the human world. The other Tooth Relic is enshrined at the “Dalada Maligawa” in the dazzling city of Kandy. Details with regard to virtues, dignity and miracles of the Tooth Relic have been recorded in the Dhatuwansha, Thupawansha, Dhadawansha, and Mahawansha. Incredible unexplained phenomena which have been occurring around the stupa. These have been witnessed by thousands of pilgrims. This includes luminous rays of laser like beams and shining orbs around the stupa at night. Some devotees told me they have heard drum beats at night, somewhat similar to drum beats heard at a Buddhist Perahera. This site is located deep inside the jungle and infested with roaming elephants and other wild animals. According to village folk, wild elephants that roam the neighbouring land have often been seen worshipping the stupa. There is a story of one lone elephant who visits the area and venerates this great chaitya. On my second visit to Somawathiya in 2018 I caught a brief glimpse of this gentle giant, moving into the foliage adjacent to the boundary of the temple. But I cannot endorse that he is the same elephant mentioned by the pious devotees. Interestingly elephants have been associated with Buddhism and Buddhist rituals for centuries.

According to ancient chronicles, prince Giri-aba and princess Somawathi (sister of King Kavanthissa) lived on a small community called “Somapura” on the banks of Mahaveli River. Price Giriaba constructed Somawathi Chethiya on the request of his wife who wanted to engage in religious activities. Upon completion of the Stupa, the prince requested a monk named Mahinda for some “dathu” to be kept in the Relic Chamber of the stupa. Ven. Mahinda Maha Thera gave him the right Tooth Relic of the Buddha. Upon completion of the stupa and five viharas the prince and princess handed over the temple to Ven. Mahinda Maha Thera and sixty other monks.

Floods often occur during the rainy season inundating the area surrounding the stupa site. It is evident that the stupa of Somwathiya was under about 7 m (20 ft) of water due to the floods in 1947. Before starting the restoration of the stupa, excavations were conducted by the Archaeological Survey of Ceylon under the direction of C.E. Godakumbura who has revealed a previously constructed stupa (5 ft 5 in) that is established as the inner stupa with a strong foundation. It was noted that the outer stupa did not have a proper foundation. Apparently, two foundations were identified after the excavation. On the lower level, there are ancient moonstones which were placed parallel on the steps at the present stupa (Godakumbura 1965). There is archaeological and literary evidence for the Somawathiya and its surrounding area showing that it was probably occupied by Early Iron Age inhabitants. According to Deraniyagala, a few archaeological remains were found in some places like Kandakadu, Trikonamadu and Kadiraweli (Deraniyagala 1992).

Nine stone inscriptions have been found around this site and the most popular is the four inscriptions found on the Eric Swan rock. This rock can be seen few metres away from the gravel road, about 100 metres before the main entrance to the temple. This rock got its name because a photographer called Eric Swan who was killed by a wild elephant near this rock. On July 4th in 1981 then President J.R. Jayewardene came to Somawathi to ceremonially open the “Kotha” of the stupa. As soon as they arrived at the site, at about 2 pm the whole sky became yellow and the sun looked like the moon. Multiple colours started appearing around the stupa. All the white clothes worn by the devotees had appeared yellow by this unusual light. On April 28, 2002, a similar occurrence happened in front of thousands of pilgrims. This time it had continued for over 45 minutes, the longest time this phenomenon continued. Many incidents can be found in the Holy Canon about the Buddha Rays. Six coloured rays which were gathering and spreading from the Buddha’s body was named as “Shadwarna Rashmi” are signified within the Buddhist Flag and the same six colours have been used to design it. Somawathiya will remain a venerated Buddhist oasis for decades to come.