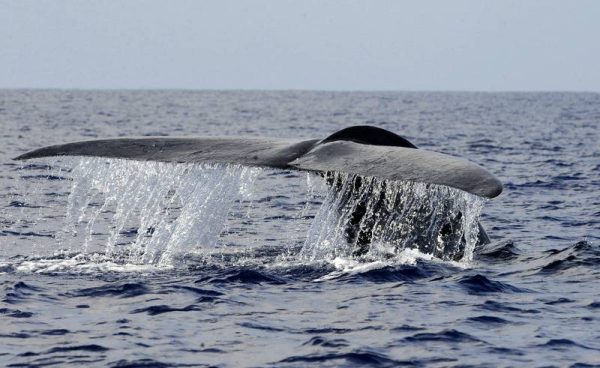 Animal rights activists have lauded a move by a shipping company that alters its vessels’ course to avoid collisions with blue whales, the world’s largest mammals, in Sri Lankan waters. AFP

The world’s largest shipping container carrier has altered its route south of Sri Lanka to protect blue whales and other creatures.

The Mediterranean Shipping Company moved its route 15 nautical miles south of the path designated by the local traffic separation scheme on the advice of a group of scientists and charities. Modelling suggests this could result in 95 per cent fewer collisions between blue whales and ships.

Their habitat lies in the northern Indian Ocean off Sri Lanka, where they remain year round, and their presence has spawned a vibrant tourist whale-watching industry.

The biggest threat to the animals since whaling was banned in the 1960s is ship strikes.

“This rich food web results in an area which is optimal for fishing,” Mr Wijeratne told AFP. “Not surprisingly, whales also gather in this area.”

“We believe that the commercial shipping sector has an important role to play in protecting cetaceans, specifically in helping to reduce the risk of ship collisions with whales,” said Stefania Lallai, vice president for sustainability at the Mediterranean Shipping Company.

“Raising awareness of these issues and encouraging collaboration between industry, scientific bodies, civil society and governments is essential as we strive collectively to do more to minimise the risk of ship strikes.”

The change is a big step towards influencing the rest of the shipping world to amend its route.

“MSC is making a significant difference for these endangered whales. Whales often die as a result of collisions and this population is at risk,” said Sharon Livermore, director of marine conservation at the International Fund for Animal Welfare, which worked with the Mediterranean Shipping Company to make the change.

“Ship strikes are both a conservation and a welfare problem, and even one whale death is one too many.”

The company is also ordering its smaller feeder vessels in the area to slow to 10 knots in blue whale habitats.

“Rerouting is the key hope to turn the tide for blue whales off Sri Lanka,” said Nicolas Entrup, director international relations at OceanCare.

“It also demonstrates to the Sri Lankan government that now is the time to take appropriate action and move the shipping lane out of blue whale habitats for all merchant vessels.”

Blue whales and other wildlife are still in danger from other mishaps, however. Last year, a chemical ship fire killed one blue whale, 100 turtles and 12 dolphins when the Singapore-flagged X-Press Pearl burnt for 12 days off Sri Lanka’s main port in the capital Colombo.