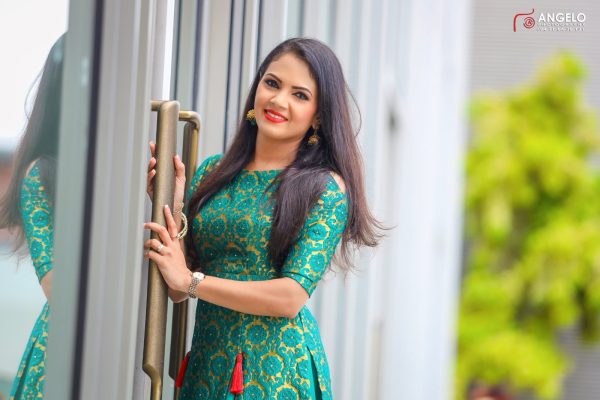 Principally the traits of moral singer are that he or she should possess a ‘voice trained’ vocal voice ,love for music, self-confidence, commitment, patience, determination also the ability to deal with criticism and rejection. All these characteristics are possessed by Shashika Nisansala who sings in more than one specific musical genre. It needs to be emphasized that Shashika has inherited singing affiliations from her father of course possessing innate talent for her prolific achievements in the music arena .

Shashika Nisansala Jayasumana at the pinnacle of celebrity as a songstress and playback singer.Born in a remote area Deraniyagala in the Kegalle district.She had a younger brother apart from her parents. Her father’s family members have had singing instincts.She had confessed that the father’s brothers used to have sing song sessions in the evenings at their humble dwelling. Shashika obviously has had inherited affiliations to sing having obviously her own innate talent.It has been quipped that the family had been devoid of electricity which was a vast impediment to listen to music from the radio.Her father had made listening to music possible by connecting a transistor radio to a car battery.Hence Shashika and family had come up the hard way deprived of basic facilities in the native village.Shashika’s father had been adamant to make her a vocalist giving her whatever grooming desirable according to his means. Up to grade five she had studied in the village school Udapola primary school.For her standard five scholarship examination had entered Avissawela President’s College .With her results she had been admitted to Dharmapala Vidyalaya Eheliyagoda, when the family had to shift to Eheliyagoda for travelling conveniences. After triumphing in the GCE Ordinary Level examination she was able to enter Anula Vidyalaya Nugegoda.

At Anula Vidyalaya there had been a singing competition for classical and simple singing which was adjudicated by famous Deepika Priyadarshini Pieris.Deepika having been impressed with her vocal talent had invited Shashika to join her classes during weekends. Her father was ever willing to support her in her musical journey with his wish to make Shashika a popular singer. Shashika had selected drama,performing arts,music and Sinhala for her advanced level..But as she found these subjects too cumbersome and weighty she had dropped drama  for her advanced level.She had added that when she attended Anula Vidyalaya she had travelled in CTB buses from Avissawela to Nugegoda during the time had made some friends who travelled with her.One such friend Lakmal Aiya who had told about the “Thurunu Shakthi” music singing contest organized by the National Youth Service Centre Maharagama in year 1999.In this singing contest which was somewhat of a grueling competition she emerged as the winner winning the coveted “Thurunu Shakthi” award, the victory delighted Shashika’s father more than her as he was adamant from her small days to make her a singing star. Shahsika’s father had bought her a keyboard when she was just five years old.Shashika had been absorbed to the “Muthuhara” and Udara  musical programs in state television as well as some musical programs at the SLBC for her expertise in the music field. .

Triumphing in her University entrance examination she had entered University of Kelaniya in year 2002 .completed victoriously a special degree in Bachelor of Arts in year 2006. Thereafter she had successfully completed her Masters of Arts degree.

Behind all her successes and milestones it was father who was behind her.After winning the “Thurunu Shakthi” released her first album from which she gained a massive popularity becoming a sought after for outdoor, indoor and even overseas concerts. The songs that were recorded primarily were “Paramitha Nopuramu Api Dedena”,”Thol Pethi Vtharak”,”Sanda Reta Reta”,”Sanda Eliya Mamai Nam”.

Her first music video was released in 2010. During this period, she had sung very popular singles as well as playback songs. Some of her popular music video songs include “Oba Esi Piya Nohela Baluwa”, “Mal Sara Hee Sarin”, “Es Deka Pura”, “Husmak Durin Inna”. She joined with “ The Voice of Lanka””  also “Derana Sixty Plus” reality competitions where she adjudicated to precision been hailed by all.For TVDerana popular sixty plus she was a judge along with Edward Jayakody and Rohana Bogoda from the inception to date.  Shashika is never in a hurry to compile new creations. She has confessed that she prefers to find ideal lyrics and music compositions, which invariably has become hits.The latest song video she did was a huge hit  was the very popular song “Chandra Payanna” in you tube, released this year 2021 directed by film director Chamil Pathiratne,.

Shashika has won the highest amount of music awards among all female or male vocalists in the annals of our music history.

Shashika had been the recipient of the SLIM -Nielsen Peoples Award for the most popular female singer for six consecutive years since year 2016.Altogether she had won eight SLIM-Nielson Peoples awards,one National award,two Raigam awards,three Sumathi awards,four State television awards,five Singnis awards,six State music awards, seven Derana awards and nine Bunka awards.The total awards won were a huge number perhaps no other male or female singer has ever won.She is in this regard well ahead of all other singers in native Sri Lanka.These awards were bagged spanned between the year 1999 to this year 2021.

During her school days and in the tenure of the University of Kelaniya a number of boys had fervently attempted to win her heart.But as said marriages are made in heaven  a science student had been successful in getting friendly with her.After passing out he had been employed at a reputed garment institution.But as Shashika became busy with concerts, new songs and overseas visits it had been decided to quit the lucrative vocation to assist Shashika in her music activities.The duo are blessed with two sons Minin and Hirun Mathagaweera who are still very young.The duo with the two sons and Shashika’s parents live in a comfortable dwelling in Delgoda.

In the context of the above Shashika had dominated Sri Lanka’s music arena winning the most number of musical awards during the past two decades.All her fans would without any doubt wish her to add new songs to her already popular collection of songs also as a film playback singer.