Even after being closely connected to Hong Kong for 26 years, I am still amazed by the contrasts there. Professionals earn the highest salaries in the world while destitute old women scavenge for cardboard boxes. Tycoons live in the world’s most expensive mansions while the poorest live in tiny subdivided flats. Perhaps the most striking contrast is the crowded urban areas of Central, Kowloon, and Mong Kok, and the deserted villages in the rural parts of the New Territories where I lived.

Hong Kong is barely 500 square miles, and only half of that is inhabited; the rest is given over to hillsides and country parks. They are 7 million tightly packed people. Then, how does one explain deserted villages?

Leonard Woolf’s classic Village in the Jungle, set in colonial Ceylon, narrates the slow decline of a small, isolated village, Beddegama. As the people leave or die out, the jungle gradually covers the crumbling, miserable huts. The last survivor is Punchi Menika. In the final scene, as Punchi Menika lies in her dilapidated hut, a giant wild boar glides in like a mythical devil to gore her.

This scene came to mind when, during a hike, I stumbled into the village of Wong Chuk Yeung. Located about 4 km uphill from the lovely seaside town of Sai Kung, the village lies within a country park at the end of a narrow, twisting road. On the way up, the road winds through a steep slope on the left and a forest to the right. Uphill, trees press on the road from either side, forming a canopy. 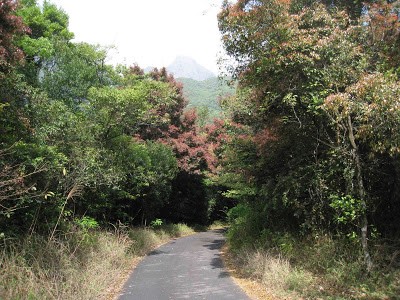 At its first appearance, the village gave the idea of being inhabited, with strands of electricity, street lights, and a functioning water service. The one mailbox overflowed with recently delivered mail, mainly electric and water bills. However, the lichen-covered houses and the trash-strewn, weed-choked alleyways indicated a lack of life. Rice fields and fruit trees long abandoned and overgrown with weeds surrounded the village. Butterflies and dragonflies fluttered. Signs of rooting by wild boars was everywhere, and the fragile barking deer would scamper off at my approach. Five-meter long Burmese pythons had been seen nearby. Old graves stood sentinel. 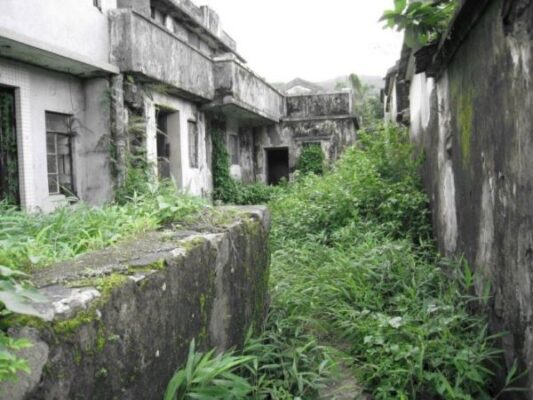 Long ago, the village was occupied by rice and vegetable farmers of the Li clan. They lacked proper roads, schools, electricity, or water service, but this simple life style suited the villagers. Then, imported rice became much cheaper. Rice also became hard to grow because a nearby iron mine caused a drop in the water table. Lacking even public transport, the younger generation preferred the comforts of urban Hong Kong or emigrated to Britain.

The last survivor
Since that first encounter, I visited the village, on and off, over a number of years. An elderly man dressed smartly in a jacket and trousers, carrying a rolled-up umbrella, would pass me by on his way to town. I would also see him in town, chatting with people his age or doing a little shopping. 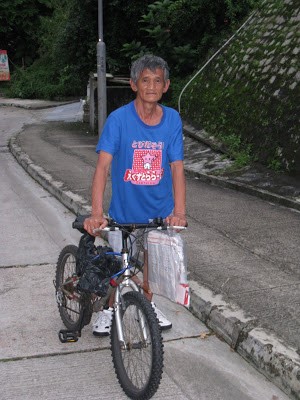 Later, I also noticed a younger man from the village.  I would meet him on his way back home, laboriously pushing his bicycle uphill, laden with plastic shopping bags. He would pause often on the way, squatting on the ground to rest before attempting a further stretch of the steep road. He did not make eye contact or return my greetings.

Then, I stopped seeing the elderly gentleman. He had died. I also learned that his wife used to carry home-made cakes on a shoulder pole for sale in Sai Kung. She had passed away before my time. The younger man, the last survivor of the village, was their son. The family had emigrated to Britain but returned to Hong Kong and to Wong Chuk Yeung for some reason.

As the years went by, the last survivor no longer had his bicycle. Instead, three dogs with matted fur would accompany him all the way to town and back. I would sometimes see him in town, feeding the dogs with scraps of bread, and reading crumpled racing sheets that he may have found in trash cans. At the village, I had noticed a ramshackle house with garbage strewn outside, the dogs loitering at the door barking fiercely at my approach. That’s perhaps where he lived.

Eventually, only one dog was left. For the last survivor, life must have been horrendous. The eerily quiet nights would have been fearsomely lonely, perhaps the ghosts of departed ancestors his only company.  Occasionally, a police vehicle would pass me on the way to the village, so they must have been keeping an eye on his safety. 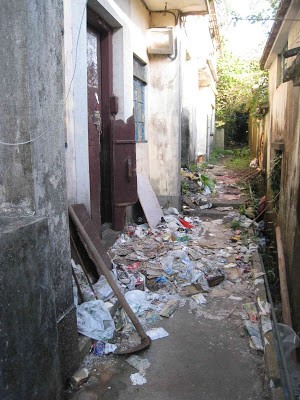 On my way down to Sai Kung town, splendid views of the island-studded bay, a golf course, and of a distant reservoir opened up. Although other hikers appeared on weekends, the road was mainly deserted during weekdays. Domestic helpers walking their employers’ dogs could be seen, but they too become fewer when the heat of summer set in. On some mornings, paragliders would be floating down towards Sai Kung town, adding color to the clear blue sky.

Driving home from Sai Kung on a blisteringly hot afternoon, I saw the last survivor struggling home and stopped to give him a ride, going out of my way to the village. As my car struggled up the steep climb on first gear, we drove in silence. When he opened the door to get down, I extended my hand and said “George”.  He repeated “Georgie” in the Cantonese style that I find so affectionate. Pointing to himself, he said “Li”. He had finally spoken. 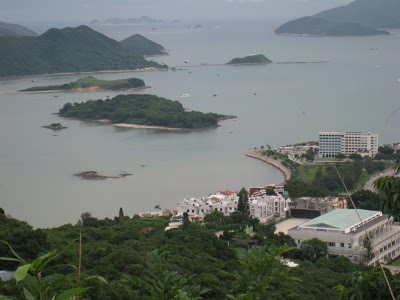 The front page banner headline in the South China Morning Post came like a bolt from the blue. Forgotten Wong Chuk Yeung was in the news, with a bang, for illegal deals between developers and villagers domiciled in Britain.

The article mentioned that Wong Chuk Yeung was 350-years old, and that, it had once contained 96 houses. A substantial village. I had not seen that many; some crumbling structures may have been covered over by weeds, or dissolved into the ground. But, every plot had an owner, and the developers were methodically buying up all the plots.

I had been writing-up my visits to the village on a blogsite, along with photos, and former villagers now in Britain had been reading my entries. In the comments section of the blog, the following message appeared:

Hi George, found your blog and found it fascinating. Great pictures. This is my family’s village, it is a lovely village, though very run down I still like to go and visit it whenever I am in HK – with much sadness all the villagers involved have now signed the papers for the land to be sold off to a development company. Not everyone wanted this but the majority won and it is now in process of exchange. I am extremely sad about this as the land has a lot of history. The buildings, the wildlife (the numerous beautiful butterflies!) in the land all needs to be preserved – Hong Kong needs to preserve old ancestral lands such as Wong Chuk Yeung before it’s too late.

Another villager in Britain, fiercely proud of his heritage, commented that he “will do everything it takes for Wong Chuk Yeung to stay in the Li family name”. He, and the last survivor, Mr. Li, may be what stood between the village and “development” that will erase all traces of a bygone-era. 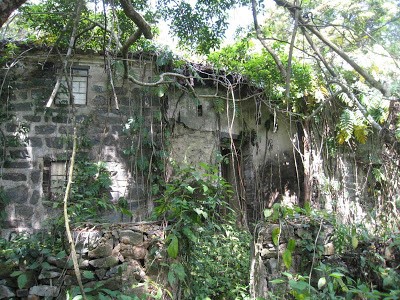 I stopped visiting the village, but would see Mr. Li in Sai Kung town, sitting at McDonalds, engrossed in a newspaper that appears to have been salvaged from the garbage. He held the paper close to his face, which probably meant he was nearsighted. That may also account for his shyness and avoidance of people, because he couldn’t see well.

Over the years, his favorite place in town had been the Hong Kong Jockey Club betting center. Even in the last days I saw him, he would be squatting on the pavement near the betting center, carefully reading the racing sheet. He was shirtless, shoeless, the bicycle and the dogs long gone. He was becoming much scrawnier and unkempt over the years. Even when I said “Hello Mr. Li”, he would not look up or return my greeting.

I left Sai Kung in 2015. Recently, I saw that the following message had been left on my blogsite:

I’m sorry to announce that the lone survivor died at the beginning of this year (2015) and within weeks the developers moved in and put up 10 foot high corrugated hoardings fencing off the land from the public access road. This is a major eyesore and even worse is the bulldozing of the trees and wildlife areas (lush green grasslands that covered former paddy fields that were farmed by the villagers in the 50s and 60s).

I wonder about Mr. Li’s last days. Were they like Punchi Menika’s in Beddegama? Did he die alone, miserably, or did someone find him before it was too late?

As for Wong Chuk Yeung, I have no wish to return. I prefer to remember it from all those years ago.