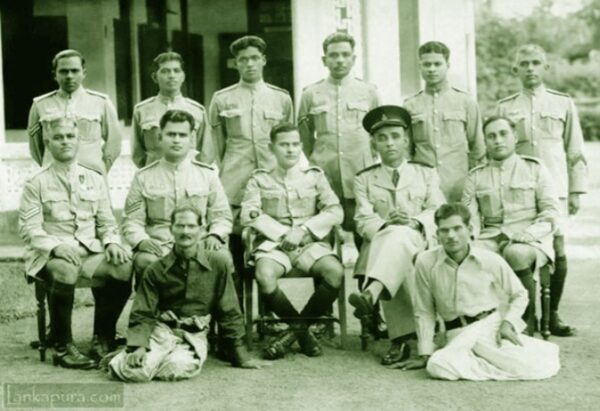 Mr Arthur Cletus Dep Joined the Ceylon Police on June 1, 1942, as an Assistant Superintendent of Police after his graduation from university. His seniors, were Messers C.C. Dissanayake, W.A.R Leembruggen, S.A.Dissanayaka, L.I.de Silva and C.P. Wambeek,, all DIGs when he was an SSP in 1962 according to the Seniority List.

He was one of the senior officers with an unblemished record, especially not being involved in the Coup d’etat of 1962. He was scrupulously honest and a devout Catholic who saw his juniors, Messrs. Eleric Abeygunawardene and Stanley Senanayake promoted IGP over him. He was extremely humble, and never opposed or even appealed against such promotions. He was always a contented and god fearing man.

He was educated at St joseph’s College, Colombo when Fr. Legoc, the well known botanist and educationist was Rector.

He was scrupulously honest, on top of a small select band of such officers. He always used his private car and never used official vehicles even to travel home. He went by the book and would never bend the rules to suit those in power in the government or in the police. Probably these qualities denied him of being promoted IGP.

I remember going before him for an interview when my promotion to Inspector was due and he chaired the interview board which included Messers W.P.A Fernando (DIG), and J.A.L. Roosmale Cocq (DIG). To make certain that I looked smart and presentable, I had a new uniform privately tailored in Tootal khaki. He realized that I was not wearing the uniform issued by the department and remarked “this is not a department issue, why did you not comply with the departmental orders ?” I was dumbfounded. Thanks to Mr Roosemale Cocq who came to my rescue saying “Arthur he looks smart. Why find fault as he meant well?”, I did well at the interview and suffered no adverse consequences.

He was an athlete of repute and brought much credit to the Police and the country as a whole. His pole vault record at the national meet was an incredible feat He was the first to go over twelve feet in Sri Lanka and continued to hold the Ceylon record for over 20 years. His brother, Lucien, was as good as he in the sports field but he chose to be a priest.

AC Dep had created a pole vault record by clearing 12 ft.7.5 ins in 1937 according to an article by KLF Wijedasa, the famous 100 yards sprinter and our teacher at Richmond College. When this record was broken in 1962 by Vijitha Wijesekera, Dep was at the grounds and immediately congratulated the athlete. According to Wijedasa, Dep represented Ceylon in a dual athletic meet with India in 1940 along with Duncan White and won his event. Later he was in the National Olympic Committee, on the Board of The Royal Asiatic Society and Vice President of the Ceylon Amateur Athletics Association.

He never publicized himself and once showed the well known sorts editor, MM Thowfeeq, a carefully preserved news clip in response to a question of what his proudest moment in athletics was. The clip quoted then Chief Justice, Sir Sydney Abrahams, saying ” I would award pride of place to Dep’s record breaking pole jumps. The mechanics of this particular event is so difficult, that it took long years in England, before a native pole jumper cleared 11 feet. Dep going six inches higher would have won him an Oxford or Cambridge blue in any year since 1924″

His wife Teckla and his children made him a proud husband and father who lived an exemplary life. Certainly his children emulated his qualities with his eldest daughter, Antoinette, becoming a medical doctor, Marie, Deputy Director of the Export Development Board Priyasath, a most honourable and dignified Chief Justice, Srimath an engineer in Australia and Linus a physics researcher in the USA. Cletus Dep retired as a High Court Judge. I can boldly say that one of the best Chief Justices we had of recent times who acted without fear or favour was Justice Priyasath Dep and I’m certainly the Bar will agree.

AC Dep was a keen historical researcher and the Police Department must be forever indebted to him for writing a History of the Ceylon Police. He spent much effort digging up information in an age when today’s Internet tools were unavailable to gather the information required for a publication of this nature. He says in Volume II that “in 1960 Mr C.C. Dissanayake, then Deputy Inspector General Of Police, asked me to write a history of the Ceylon Police…….. I had to do all the work during weekends, Public Holidays, lunch intervals, and personal leave.”

He invited IGP E.L Abeyagunwardane who went over him on the line of seniority to become IGP to write the Foreword to that publication, an index of his lack of rancor. IGP Abeygunawardana says in his Foreword: “A work of this importance and magnitude involves a large volume of research and reference, which in turn require much time labor and patience. It Is commendable that Mr A.C. Dep whilst discharging the arduous and responsible duties of office was able to devote his spare time and energy to bring forth work of this caliber. He merits the highest praise of all Police Officers and others interested in the development and progress of the Ceylon Police”.

Many years after his retirement he continued to conduct more research re- publishing the Volume 1 of the History of Ceylon Police which was first published by Mr G.K. Pippet. He traced this volume covering the period 1795 -1866 and with its aid and much effort, Mr A.C. Dep added to his own work. I know that he spent a lot of time in further research while he was working at Browns Group as a the Security Adviser/Transport Director, during my period there as Head of Security.

He says in the Preface to that volume: “Mr Pippet, the author of this volume, informed me that he was given a far too short a time to write this—–The present volume which contains more detailed account is the result of a longer period of research.” This meant that he was very much in touch with Mr Pippet when he resumed this research. The volume was published by Mr A.C.Dep consequent to a request made by the IGP to provide a copy of the early work that was out of print.

The IGP at the time, Mr R. Rajasingham (under whom I served when he was the acting SP of Southern Province (South) at Matara had this to say in the Forward. “The service in particular is greatly indebted to A.C.Dep for these two publications and I can only hope that he will be able to find the time to continue his research work and write the “History Of The Ceylon Police Volume 111 covering the period 1915 to 1948 when we regained our Independence”.

But whether Mr A.C. Dep made any attempt to do further work on this subject is not known; perhaps it was not possible due to the lack of facilities in the Police Department.. His dedication in conducting research was never adequately recognized. He was someone SPECIAL to the police and that special recognition was never granted even after his retirement. No IGP or police officer can match the invaluable contribution he made to the Police Department .

I had prematurely resigned from the Police in 1976 and having served as Head Of Security at Sri Lanka Insurance Corporation and Ceylon Cold Stores applied to join Browns Group which had 17 associated companies. Mr Dep was the Security Adviser and Head of the Transport Department which handled a fleet of about 150 vehicles. He was on the board of Interview when I faced it along with many Squadron Leaders, Wing Commanders, Majors and Colonels, and Captains from the Navy. I had not met Mr Dep for a long time and did not expect any assistance from him as I knew him to be a strict officer who never encouraged influence.

However I was selected, perhaps due to my experience in Industrial Security. I found Mr Dep traveling by bus and after office boarding a bus to Maradana station to take the train home despite being the head of transport at Browns. It was during this period he was gathering information to write Volume II of the Police History. I used to almost forcibly drive him to the Archives in my vehicle several times, something I enjoyed. When he retired we gave him a fitting farewell in 1984 and presented him with a black and white TV and he said “Thanks Nihal, now I can watch the news on TV”, clearly indicating he had no television in his house.

He was a true leader of men who never sought popularity and always acted with righteousness. His goal was never to reach high position but an opportunity to perform his duties with commitment and dedication in whatever capacity. He was an epitome of trust who went beyond expectations of honesty. It was in this context that he was entrusted and found worthy to be given the important task of writing the, First and Second Volumes of the History of The Police Department, a trust he never breached.

The Police Department along with the RSPOA (RETIRED SENIOR POLICE OFFICERS ASSOCIATION) should unveil a portrait of him at the Senior Officers’ Mess as a tribute and invite all his children to be present at the unveiling. None in the Police Department can claim that there has been an officer who contributed to the Department more than he in sports, administration, and ensuring that the History of the Police service is on record. He was an officer of the highest integrity with courage to challenge any politician during his period of service which finally deprived him of the post of IGP.

Late IGP Rudra Rajasingham in his foreword, when Volume 1 was redrafted by Mr Dep requested research on the period 1915 to 1948. Unfortunately this challenge has not been take up till now.

Mr Dep was my adviser when I came to know him well at Browns. I sometimes regretted leaving the police prematurely and he advised me saying “Your confidence and success are not determined by what has happened to you in the past, but rather by your decisions about what to focus on right now. This will determine your future.” Advice, given by him certainly has stood me in good stead.