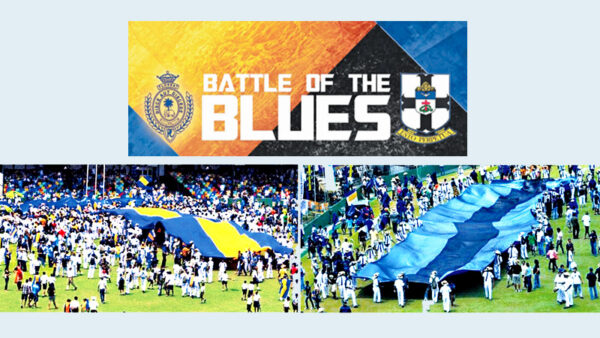 When Melbourne, Australia, was locked down recently, the restrictions were substantial. However, Melbournians were allowed two hours of exercise each day, no matter where anyone lived, or a person’s age.

What does it mean? Physical activity – and that connotes fitness and sport – was considered extremely important despite the mandated demands of the pandemic, and this was for folk of all demographics.

Sporting and outdoor activity particularly for younger people is considered an imperative no matter the nature of any lockdown or pandemic, and it’s in this context that this writer is devoting today’s column to the subject of the world’s second oldest uninterrupted cricketing big match between two schools — the Royal–Thomian cricket match.

It’s second only to a school game in Australia which began one year earlier, in 1878.

The cricketing rivalry between these two great schools, Royal and S. Thomas’ has been going on uninterrupted for 141 years. Usually, the match is played in March every year, and is the biggest event in the sporting calendar, considered bigger than a cricket Test match when international matches are played parallel to the fixture.

This is from Wisden, the legendary cricketing almanac, from an article titled “Sri Lanka’s great game”: “The big cricket match in Colombo on March 13, 1993, attracted a crowd of 15,000. But this was not a Test match: it was the annual game between two of Colombo’s largest schools, Royal College and St. Thomas’.”

“Eton and Harrow at Lord’s cannot, these days, hold a candle to what claims to be the oldest school fixture staged without interruption. Nowhere in the world is a school match accorded anything like the same attention,” writes Christopher Martin Jenkins in the same Wisden Almanac, about the Battle of the Blues, or what’s known as the ‘Roy-Tho’ for short.

But yet, this great fixture, which to say the least is part of the country’s national heritage without exaggeration — it has to be surely, if it’s older than the Ashes series — is coming dangerously close to being interrupted this year, for no apparent reason.

The usual match date in March was sacrificed for a later fixture in early May 2021, because it was going to be an encounter played without spectators anyway. The game was scheduled to be played at the International Cricket Stadium in Sooriyawewa.

However, we are told that a member of the Thomian team was tested and diagnosed positive for Covid just days before the game. Five other players were found to have been infected too. The match was called off. This is after the players had been placed in a bubble, but that’s another story, and we’ll come to it.

Strangely, the match organizers seem to have got cold feet after that. You wouldn’t guess it if you spoke to some of them because they say it is a matter of time before the 142nd gets underway, without spectators of course. But if the series is to be uninterrupted, the match has to be played before December 31, 2021, obviously — unless someone doesn’t know how the Gregorian calendar works.

But it is becoming increasingly harder to accept any of the assurances of the purported match organizers or authorities anymore. Which is why a core group of interested old boys from both schools got together and formed a WhatsApp group that would act as an independent body of stakeholders that would attempt to hold the feet of the organizers to the fire, and have the match played — because if it’s being postponed, it is being indeed put off for no valid reason whatsoever.

That’s a tragedy. Old boys from both schools have shown tremendous interest, naturally. Some members from the aforementioned group began an internet petition that has got a good number of signatures already with that tally increasing.

However, it is the attitudes in the face of the Covid-related crisis that are quite disheartening. Some folk close to the immediate stakeholders in charge of organizing the game, are falsely painting a picture of danger to students due to Covid, when there is clearly no such thing if the boys are to be kept in a bubble for over 14 days before the match, and then sent to play. This is common sense. If nobody is diagnosed with Covid within that reasonable time period, nobody is going to get Covid just by playing the match.

A heathy mind, in a healthy body. This year, school authorities, match organizers and the advisors to both schools forgot both aspects. They don’t seem to care for fitness and the encouragement of sport, as it is in Australia. Playing the game should have been the priority of the authorities of both schools because there is no point in fretting about a disease (Covid) that will take no lives, if the correct protocols are observed.

But while there are no healthy bodies, the healthy minds have been forgotten too. The school authorities and the delegated match organizing personnel are being paranoid for no reason. Postponing the May fixture because of a Covid diagnosis is one thing.

But being paranoid about Covid hitting again, and postponing a historic big match that’s part of a global heritage is quite another.

A thousand problems are spoken about when the simple issue of playing a match without spectators is broached. They haven’t heard of the saying, “the best laid plans of mice and men,” and that’s hilarious.

The best laid plans of mice and men went awry in May. One of the oldest uninterrupted cricketing encounters, older than the Ashes, would you believe it, had to be postponed. But what do the school authorities and match organizers do? Apparently they wait for another month of Sundays, and push the match — tentatively — to September, as this writer has been told by sources close to the match organizers.

Best laid plans of mice and men indeed. They have not considered that a myriad other things could happen in September, as they did in May. Who knows? There are new virus variants galore. There can be more positives, false positives even, for the virus among the teams.

Is there a plan B? Is there a Second XI of players lined up somewhere, quarantined at a separate location, so that if the first XI is incapacitated, the Second XI boys can play?

Pray tell us, what’s the merit in pushing off a match that could be played in July, for instance, to September? What if it gets postponed once more in September, due to unavoidable reasons, as in May? How many months are there after September for the organizers to recoup their energies and attempt to play again before the end of the year?

Perhaps, there is no such intention. Perhaps, the idea is to take the easy way out, and postpone the game to next year, effectively interrupting the series, just as they did with the shorter version, the Royal–Thomian 50 over encounter last year. What a colossal sellout that was.

What a crying shame that two of the best schools in the island have been consumed by Covid paranoia. They could be held up to the rest of the country as a prime example of what Covid paranoia could do, and that’s not very complimentary at all.

Healthy minds in healthy bodies are forgotten. The pride to compete — the renowned Thomian grit not to give up under any circumstances, is forgotten, not to mention Royalist fortitude.

Do these people remember that the Covid fatality numbers were cooked up by the relevant authorities recently, forcing an extended lockdown? None other than the President said so. Likewise, just think about it, keeping healthy boys from playing the match of their lives as a result of some — even possibly flawed — PCR tests, is a crime. Why flawed?

Because if somebody cooks the State’s death count and exaggerates that, it could be a much simpler thing to mislead an entire school into believing palpably flawed PCR tests. There are any number of articles that vouch for the fact that many of the PCR tests that are made, return false positives. (Here is one: https://www.ft.lk/opinion/Blithe-confusion/14-719658.)

No matter. Let us assume that PCR tests cannot be ignored, and are authentic. Is that a reason to delay the match? All that needs to be done is to keep teams in total isolation, and ensure that there is strictly no contamination of that bubble. What’s the point in having a bubble, if it’s going to yield Covid positive results of individual players anyway?

The way it’s done is to take the PCR tests when the players and officials enter the bubble, and then make sure the bubble is never contaminated by outside contact under any circumstances. If that can’t be done, get outside expertise to do it. Have a similar plan B with two second string teams quarantined elsewhere. With all these plans — still play the match early, so that if everything fails, there is still time in the year to fall back to a plan C. Phew. Has everything got to be spelt out?

Sounds complicated? No. During World War II the teams went all the way up to Gurutalawa and practised there. Those were the days. Nobody gave excuses, nobody parroted the word exams. There can never be perfect conditions in a roller coaster year of this sort. Hoping for such is not a plan of mice and men, it’s a plan of mice and madness.

Just hunker down, make some hard choices, harder decisions, don’t mind who wins or loses, let any player who prefers exams over cricket forfeit his place — and play a simple two-day match with minimum fuss, and play it early. So many international cricket, rugby, tennis and other sporting fixtures are underway in Covid-rampant countries even as this is written.

Playing the match would impart a valuable and much-needed lesson to the entire country about “keeping your head when all about you are losing theirs.” That’s what is expected of two of the best schools in the country. Of course, the authorities have to grant exceptional permission to the two schools to reenact once more, a historic uninterrupted rivalry. It’s between schools that don’t want any special privileges — but merely want the simple go-ahead to keep alive a tradition that is like no other, and brings immense pride to a wearied nation.