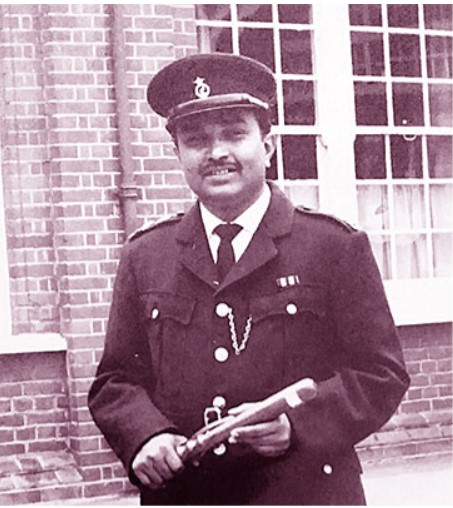 Seekku Baduge Wimalasena De Silva, well known as “SBW,” departed from this world on July 25, 2021. He was a household name in the police, and enjoyed the respect and admiration of society. We usually go to great lengths to extol the qualities and achievements of the dead. In doing so, we also bury shortcomings in those we write eulogies about, with consideration for respect and courtesy. But the case of SBW is different. He was an exemplar of honour, rectitude, honesty and principles. He lived the way he worked as a policeman, and he applied to his profession, the same principles he observed in his private life.

There were no differences and distinctions. In this context, he was unique and extraordinary. He observed the highest, impeccable standards as a private citizen in all his dealings, leaving no room for anyone to find fault or raise questions; and he assiduously practiced the same standards in his profession. The ideal practice of the police profession requires the invocation of the most pristine human qualities. Altruism, ethics, objectivity, respect for the law, and fearlessness constitute the cornerstones of an edifice which has over time reached a state of decline. SBW was the quintessential cop in this context. He will not have a peer to compare with, or overtake him. There may have been many IGPs’, Senior DIGs’ and DIGs’, but I doubt whether any of them could match the standards that SBW De Silva practiced, both in his profession, as well as in life.

To think that I sing praises of someone who retired only as a Senior Superintendent of Police may confound many. What requires to be said is how and why he retired prematurely, at the relatively young age of 51-years, and only as an SSP. Of course the rank of SSP was a highly respected post then, whereas we now cannot escape brushing against a surfeit of Senior DIGs and DIGs in the corridors of police headquarters, thanks to the shortsighted follies of two IGPs who colluded in the increase of cadre of senior ranks meaninglessly at one time. After all, the interests of the service should at all times have prevailed over the interests of self seekers.

The simple lesson that the structure of an organization should resemble a pyramid, was lost on those occupying the highest echelons. SBW retired prematurely because the way he lived and worked convinced him that he should not accommodate the injustices evident in the 1970s and 1980s where juniors, abetted by politicians, plundered promotions at the expense of the line of seniority. Efficient, honourable officers of the calibre of SBW were thus cast adrift. To a good officer, his place in the line of seniority would at all times be sacred and inviolate; and in the case of SBW, he was not the type to chase after a politician to protect and safeguard his position in the line of seniority over which a self seeking individual was seeking to trespass. Even to remedy an injustice by going behind powerful patrons was anathema to him. How he reacted to an injustice was not to fight it with unjust methods, but to retire from a service in which he had lost all hope. In a way, by such premature retirement, he exercised greater prescience than all of us, for he knew exactly which way the wind was blowing.

But the service lost a unique officer, not only for his sterling ethics and qualities, but also his knowledge, experience and efficiency. He adorned the roles he played in the CID and the Intelligence services. He is yet talked about as being a model officer in charge of police stations, and probably the best director of police training, basic and advanced. SBW received the baton for the best overseas student at a course steered by the Metropolitan Police in Hendon, UK. It was unfortunate that those in the highest seats had failed to exploit this remarkable achievement to praise his worth to the establishment and keep interlopers who eventually climbed over him at bay.

It was a tragedy that his full potential was not tapped. His enormous and exceptional talents and skills could have helped the service bloom if there was an environment propitious for the growth and development of the police. We all know that “one swallow cannot make a summer”. SBW had the misfortune of being cast in an environment of rapidly declining standards, and where those of his calibre were a mere handful. The words and actions of a sage in such unwise times were often not only ignored, but also treated with scorn and derision. That possibly would have been SBW’s fate. He served at the wrong time. There were none to appreciate his worth. He therefore had great prescience in deciding to leave the police prematurely. But his loss was certainly a tragedy for the police. I pause to speculate how far he may have prospered, if he worked till retirement age; possibly a senior DIG, if not more. But then, would his enormous skills have been recognized in an environment where standards were dwindling rapidly, and the service was bereft of leaders who had the guts to arrest the decline.

Having known SBW well for long, I feel that he would have been a unique asset in respect of reforms and far reaching changes to the police organization, which to me is in a moribund state. At one time, and hopefully if the wind blew my way, I had in mind to canvass the expertise of SBW and another officer who is no more with us, Achilles Joseph, to completely reorganize police headquarters. SBW, with his sharp intellect, probing mind, a capacity to see the larger picture, and above all, his unerring skill to spot loopholes in any situation, would have been ideal to help usher reforms to the service which is desperately in need of them.

SBW never sought material assets. He in his profession or private life, did not chase after prominence, or a place in the sun. He derived great pleasure from being the fulcrum of the Retired Senior Police Officers Association for countless years, a service he rendered selflessly. He was a role model for emulation, not only to those who aspire to be professionals, but in the art of living as well. He was a martinet, because the compromise of sacred principles and ethics was alien to him, both in life as well in his profession. SBW was a good Buddhist in every sense, for when living, and at work, he kept a considerable distance from craving, desire, acquisition, and ambition: All he sought at work was a sense of fulfillment and achievement.

We express our profound sorrow to his grieving spouse Dharma, and his daughters. We have already seen ample proof of how they had imbibed the ethics and values of a truly great human being, a legend of the police.