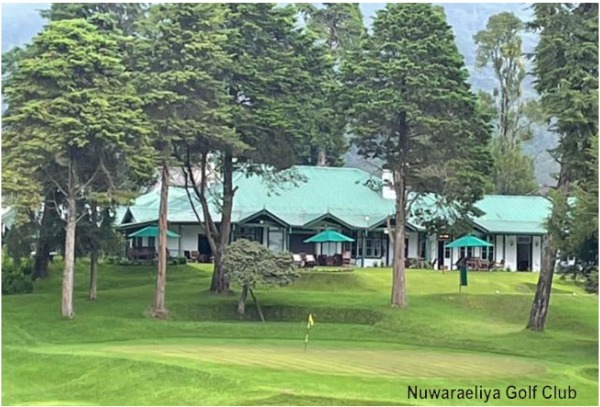 The killing and dismembering of the tusker in Block 3 of Yala National Park recently brought tears to the eyes of elephant lovers. This poor animal stayed within the boundaries, marked by us to say “you are safe here”, and was still killed with a single shot to the head by inhuman poachers operating within the National Park. Further his small tusks were removed using a chainsaw. The tail was also removed because its hair is in high demand.

Why is this happening? Why can we not catch these culprits? We should do our best to stop these inhuman activities. Sri Lanka Army’s elite units can help the Wildlife Department in this effort.

As a local saying goes, you never get fed with watching ‘Bali and Ali’. ‘Bali’ is a traditional dance form and ‘Ali’ are elephants. An elephant herd is such a delightful sight; baby elephants always playing under the watchful eyes of mother elephants; the leader, although a bit aloof, always protecting weaker ones.

My wife Yamuna’s late maternal grandmother carried the longest registered name in Sri Lanka in her birth certificate – Akkada Mukkada Weera Rabukkada Rubuke Jayagath Diyathilaka Koralege Illanganthilaka Mudiyanselage Leelawathi Illanganthilaka. She was from a noble house of the Kandyan Kingdom, which was tasked with protecting the Buddha’s sacred Tooth Relic. She lived in a Walawwa behind the Hanguranketha Raja Maha Vihara, where the Tooth Relic was taken when Kandy fell to the British in 1815. Her relatives used to worship the Relic and offer Jasmine flowers. 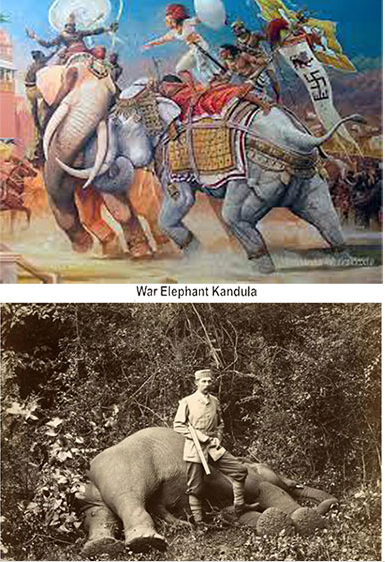 You must be wondering what all these names that prefix her surname means. They denote honours conferred on her house, for bravery, by various Sinhala kings for fighting the enemy, to protect the Buddha’s Tooth Relic, which was the most important possession of any Sinhala king. These prefixes were conferred by the Head of State for long dedicated service and bravery. For example, I am Admiral Ravindra C. Wijegunaratne, WV, RWP and Bar, RSP, VSV, USP, NI (Military). These letters that affix my name denote Weerodara Vibhushanaya, Rana Wickrama Paddakkama, (twice), Rana Soora Padakkama, Vishista Seva Vibhushanaya, Uttama Sewa Paddakkama and last Nishan-e-imthiyas (Military) awarded by Pakistani Head of State.

Hanguranketha Walawwa produced beautiful ladies for generations. I used to say they were like Jasmine flowers which signify fragrance, delicacy and elegance. It is probably the merits of worshipping the Tooth Relic with jasmine flowers and offering jasmine flowers to the Temple of the Tooth. My significant other was ‘Miss Sri Lanka for Miss Asia Pacific contest 1989’. Her mother late Talatha Gunasekara (née Abeykoon) was a famous actress in the 1970s, who resembled famous Hindi actress Vyjayanthimala. My wife has photos of her playing tennis at Hillwood College, Kandy wearing a half-saree (lama saree) in 1952. She was very beautiful.

This noble family were elephant lovers for generations. When my wife’s grandmother used to visit our home with my mother-in-law. She used to tell me: “You know Ravi, I was married off to Abeykoon (grandfather) with enough land, three servants and one and a half elephants!”

My son, who was about six years old at that time would ask, “Muttattama (great-grandmother), how do you measure half an elephant? By cutting a big elephant in two? Aiyo!” And she would reply, “No my dear great-grandson, what I meant by one and a half elephants is an elephant and a baby elephant!” 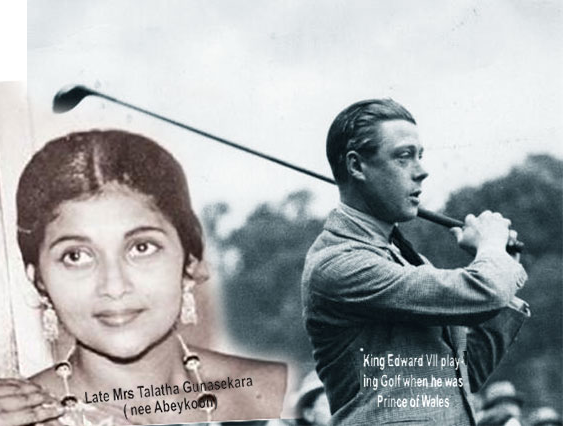 In the 1940s, her younger brother who attended Kingswood College at the time suddenly disappeared. He was not to be found. They later came to know that he had gone with those who catch and tame wild elephants in the Northern and Eastern Provinces. He came back home after 30 years. We used to call him Lanka Attha (Lanka grandfather) because he knew all the jungle areas of Sri Lanka, having worked so well with wild elephant trainers, and all the tactics of taming an elephant. He loved elephants.

We, as a nation, never killed elephants. We protected them. Some were tamed and used for heavy work. Other tamed elephants and tuskers were used in processions. The tusker carrying the Buddha’s Tooth Relic during the Kandy Perahera is highly respected by the public.

We are a nation that trained elephants for war during ancient times, trained and guided by our trainers for combat. Elephantry is a term for a specific military unit that had elephant-mounted troops.

Pliny the Elder, a famous Roman author stated that in Mediterranean markets, there was high demand for Sri Lankan elephants. For example, Sri Lankan elephants were larger, fiercer and more suited for war than any other type. This superiority, as well as the proximity of supply to seaports, made Sri Lanka’s elephants a lucrative trading commodity.

When Arahat Mahinda Thera arrived in Sri Lanka to disseminate Buddhism, under the aegis of the great Indian Emperor Asoka, our King Devanampiya Tissa, (247 BC – 207 BC) invited Arahat Mahinda Thera to teach the Dhamma to his wives and court. According to the Dipawansa, the oldest record of Sri Lanka, due to the lack of space in the King’s palace to accommodate such a larger gathering, the elephant stable was cleaned and prepared for Arahat Mahinda’s sermon. This shows that even King Devanampiya Tissa kept tamed elephants and an elephant stable.

My article in The Island newspaper of 29 August 29, 2020, ‘Protecting Mogul Emperor Aurangzeb’s silver coin ship’, relates how even in 1703, Mughal Commander at Coromandel, Daud Khan Panni, spent 10,500 silver coins to purchase 30 to 50 war elephants from Sri Lanka. This purchase was approved by our king at the time, Wimaladharmasuriya II, in Kandy, according to the book, ‘Mughal Warfare: Indian Frontiers to High roads to Empire 1500 to 1700’ by Jos JL Gommans, Leiden University in the Netherlands (page 122). The great Mughal Emperor Akbar (1556- 1605 AD) had 32,000 elephants in his stables, more than one third imported from Sri Lanka! Moghul Emperors were elephant lovers.

It was the British, who invaded our country, introduced elephant killing in the 1820s.

Due to the COVID-19 pandemic, my movements have been restricted to Nuwara-Eliya for months. I have no complaints, cool weather and fresh air being enjoyed by myself and my family, especially my son, who drives up to Nuwara-Eliya Golf Club, which is deserted, and plays nine holes every day, with no crowd and at his own pace.

A small sign next to the Golf Club drew my attention a few days ago. It gives directions to the grave of late Major Thomas William Rogers, who killed more than 1,400 elephants within eleven years, until he died struck by lightning at Haputale Rest House on June 7, 1845. Thousand four hundred elephants killed by one person in eleven years. What a crime! 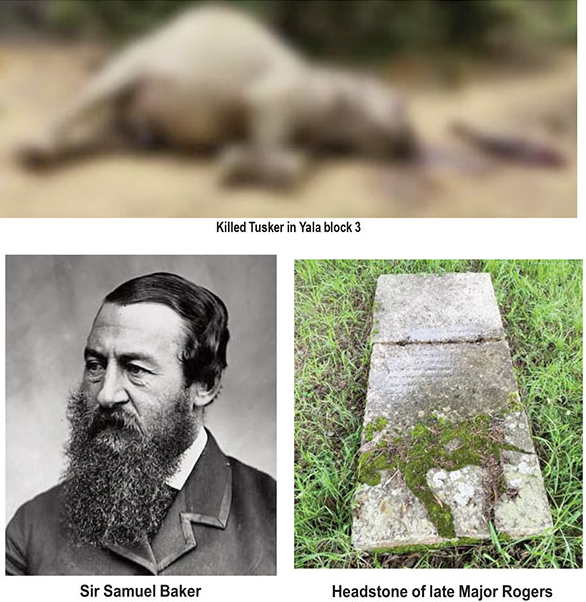 Sir Samuel Baker of the early British colonial era, who was famous for Nile expeditions in Africa, was a notable elephant hunter in Sri Lanka, then Ceylon. One day he killed 11 elephants before breakfast and 104 elephants in three days. Colonial Office papers indicate that rewards were offered for killing 5,500 elephants during this time. Further Colonial records show that Baker complained when the Colonial Secretary reduced his rewards for killing elephants.

It is recorded that Major Skinner and Captain Gallewy killed 700 elephants each, but they were no match to Major Rogers. There is a connection between elephant killing and golf! Those days if you had a golf bag made out of the skin of a bull elephant’s penis, you were considered an important man. Your importance was further elevated if you were the hunter who killed that bull elephant. Such cruelty! Such vanity!

According to Wikipedia, King Edward VII owned a golf bag made from the skin of an elephant’s penis, a gift from an Indian Maharaja who had heard of the king’s fondness for golf and big game hunting. The elder son of Queen Victoria, who waited 60 years as Prince of Wales to become king, King Edward VII laid a golf course in Windsor and was a keen golfer.

Our elephants underwent untold suffering under the British. Major Rogers’ crimes did not sit well with Sinhala Buddhists and Tamil Hindu estate workers who worshipped Lord Ganesh, the elephant-headed Hindu God. They cursed him and he was struck dead by lightning. The story goes that even now lightning strikes his grave from time to time.

I asked how true these stories were from an old worker at the Nuwara-Eliya Golf Club. He confirmed it! Once lighting had struck the grave and even the Golf Club workshop had caught fire, he said. The poachers who killed and dismembered an innocent elephant in Yala Block 3, close to the Lord Skanda’s and Lord Ganesh’s temples, in Kataragama deserve similar punishment from God.

Please raise your voice to protect our elephants.

I will be failing in my duty if I do not acknowledge the research support provided by my son Ravi junior, a keen golfer and animal lover, for this article.