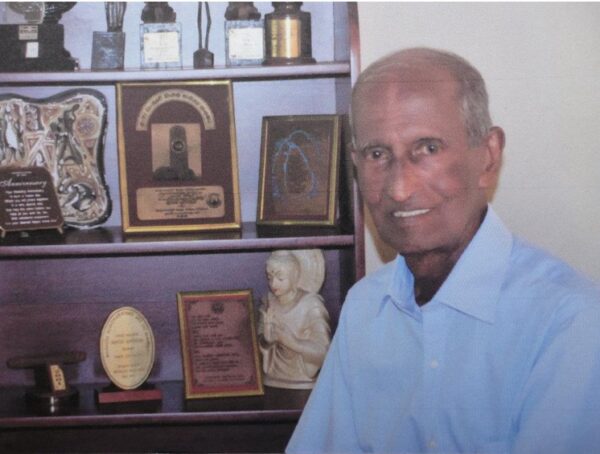 One of the utmost universal abilities of fruitful professional waged actors is that they play well with others and they’re able to make genuine acquaintances with everyone on set. They’re truly good people, passionate, purpose-driven and dedicated sans ego. They always handle themselves with grace and dignity , they dare to bring their personalities to every protagonist delegated. One such inimitable actor who had conquered the stage, mini and silver screen with consummate extravagance for over a half a century is celebrated actor Santin Gunawardena.

Santin possessed an authoritative vision for his future in store after he was selected for the first stage play ‘Janelaya’ in 1962. His commitment to work towards that visualisation every day, the confidence that it’s possible, engaging service above self with inspiration. ‘Hunuwataye Kathawa’ (Caucasian Circle) was staged initially in 1967; the role of Simon Sashawa (soldier) was portrayed by Santin Gunawardena alongside Grusha portrayed by Manel Jayasena uninterruptedly for 28 long  years with about 3000 stage appearances. It is learnt that when Manel passed away Santin had been so flabbergasted unable to face even an interview to the national radio as he was very attached and fond of the Henry Jayasena family. With his abundance of vocal skills the popular stage song ‘Yuddeta Mama Giya Geni Gedera Thiya’ adding a spectacle to his portrayal of this character.

Born on April 14, 1938 in Nagoda in Kalutara district had his primary education was at Maha Heenatiyangala Vidyalaya in the village before entering Kalutara Tissa Madhya Maha Vidyalaya in year 1949 after triumphing in the scholarship examination. The astrologer who had read his future had predicted him to excel in sports, singing and creative areas envisaging  to be a well-recognized individual in society. Santin had excelled sports in cricket, athletics and studies. In 1955 he had passed the SSC in the English medium. While representing Tissa Madhya Maha Vidyalaya in cricket had performed admirably in the annual big match, the famous big match battle of the mangosteens in Kalutara in the years 1956 and 1957 had shone as a dependable opening batsman while in the annual big matches versatile singer Narada Dissasekera had excelled for Kalutara Vidyalaya.People who watched the big match do remember well how Narada Dissasekera hot a massive six over the cross in the adjoining church.

Apart from been a cricketer Santin had shown immense skill in athletics too.. In the year 1956 had been adjudged as the best athlete among schools in the western province having been the champion high jumper, second in the triple jump and been a member  of the winning 4 X 400 relay team. Santin had confessed that no one in his family had excelled in sports or in arts to verify it is not genetic not having any hereditary affiliations. Just after leaving school had joined as a Cartographer at Narahenpita Survey Department. It is pertinent to state that Santin had shone in indoor sports also, like carom and bridge winning many trophies, was the indoor games unbeatable champion in the Survey Department. During the years 1964 to 1977 Santin had exposed his talent carrying the accountability in organizing the events for the State Athletic Association. Santin had entered the stage by a sheer quirk in year 1962. During his tenure at Surveyor Department, he had participated in group singing at sports festivals and had been renowned also for singing talent. Through his colleague, Shelton Silva, he had got an opening to portray a role of ‘Akasa’ as the actor designated to portray ‘Putupala’ had withdrawn unable to sing ‘Me Thiyenne Kanthoruwa Weda Arabana Kanthoruwa’, in Henry Jayasena’s first play ‘Janelaya’ in year 1962. This unanimous decision of Shelton was Santin’s beginning after which he was a sought after actor been nominated thereafter for every play of legendary Henry Jayasena. However, Santin had to surpass an audition steered by musician Somadasa Elvitigala, which he had achieved commendably.

It is reported that at that time the survey department it had been the nucleus for so many artistes to bloom. Santin who was a Cartographer at survey department had been bestowed a scholarship to the Netherlands from 1975 to 1976 where such personnel from 22 countries had participated. Santin bought laurels to Sri Lanka been adjudicated the best Cartographer in the entire batch. It was Santin who had designed the Colombo map for the Municipal Council in a new design in 1974 which is still is intact.

Santin tied his nuptial knot with Gunawathie Ramawickrema on March 4, 1968, an employee of prestigious Bank of Ceylon also a stage actress having been in love for eight years. Santin had introduced creative ‘Gunie’ to Henry Jayasena’s ‘Manoranjana Wedawarjana’ , subsequently to ‘Hunuwataye Kathawa’( The Caucasian Circle, portraying three roles viz Nataliya, Grusha’s in law, mother in law) and several other plays like ‘Apata Puthe Magak Nethe, Janelaya, Makara, Diriya Mawa Saha Eyage Daruwo and Thahanam Deshaya’ in which her portrayals were applauded. The duo’s only daughter Jayadhari had also acted in Janelaya as Miss Karadasi and in Hunuwataye Kathawa as the elderly lady.She lives in Sydney a mother of two daughters. Santin had been a sought-after stage actor. Several directors had come to his office in  pursuit of  him requesting him to portray vivid roles. One such significant juncture was when Simon Nawagaththegama offered a role in Suba SahaYasa. He had come to invite to portray ‘Doratu Palakaya’ role, opposite to king’s role portrayed by Upali Attanayake. This was another feather in his cap as the role further substantiated his apt to an unprecedented ebb.

Santin had directed seven short teledramas apart from acting in them. He had also portrayed roles in films such as ‘Arumosam Wesi’ and ‘Sivarangasena’. Santin had once confessed that one can teach technology, but one cannot teach creativity. This advice from him was to all novices to have creativity in mind if they are to impress in this field. In his twilight years had quipped that there are virtuous signals sprouted by young actors which is very upright for the industry. 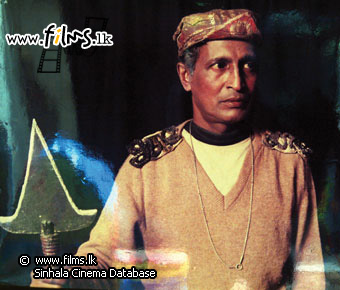 Appreciation to Santin Gunawardena for 50 years of stage dominance was appropriately organized by the cultural department, was held at Tower hall foundation at Savusiripaya auditorium on May 31st 2012. In 2013 was awarded the once in a lifetime award the ‘Natya Keerthi ‘award presented by the cultural department by the then Minister of Cultural Affairs and Art TB Ekanayake. What is appended below are some statistics of the lifetime of achievements made by Santin to arts compiled by the authorities of the Ministry of cultural affairs and Arts. Was introduced to Henry Jayasena by colleague Shelton Silva at Survey department in 1962 was selected to portray a role in Henry Jayasena’s. Janelaya on April 29, 1962. After which for every