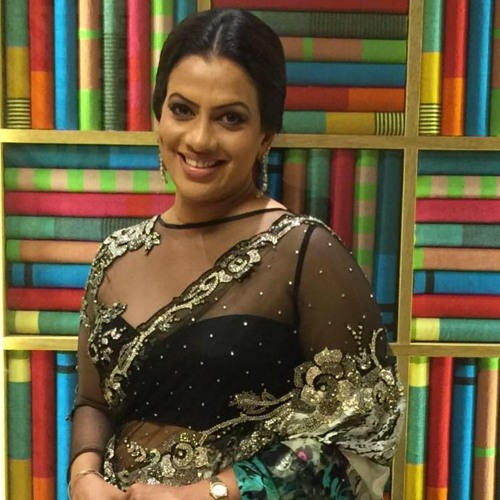 Charisma is one of the real surface qualities that you would expect in any actress. Obviously, a performer has to be charming, expressive, and charismatic.  This is because performing on camera, requires a certain amount of expressive energy, so those individuals with high-octanes of energy and the ability to translate that energy on-screen should go without saying. Hard work and commitment is another trait needed to become a successful actress like Sangeetha Weeraratne so naturally talented with her hereditary affiliations to father. Hard work, commitment, confidence and passion are the other traits embedded in the personality of Sangeetha who bring one hundred percent of herself to each role she plays though could be mentally, physically and emotionally exhausting. Sangeetha is one who could whole-heartedly commit to be successful actress she is..

Dian Hemamali Sangeetha Weeraratne born December 13, 1973,  is a Sri Lankan film actress in the Sri Lankan cinema , director ,producer of films. model, dancer and an entrepreneur.She was named after the  box office film ‘Sangeetha’ She is the second daughter to parents Timothy and Daisy. The elder sister is Nayanathara who is married domiciled in Sydney ,Australia. sangeetha has had her primary education at St John’s College Panadura before moving to Methodist College Colombo for her secondary education. She kad made her debut as a sixteen-year-old teenager in Roy de Silva’s  film “Matter of Time” having acted with veteran prodigious  renowned actor Gamini Fonseka. In the year 1989 .Sangeetha had been a keen dancer having  attended dancing classes  until she was about thirteen years. She had been a keen tennis player having been a member of Panadura Sports club. One day after a  playing tennis she had returned home on her bicycle when Roy de Silva had visited her father the famous cinematographer Timothy Weeraratne. Immediately upon seen her agility , her robust personality and good looks had suggested to father to offer her to portray the role of Shereen the main character in his film  ‘Matter of Time’ which he had agreed to, Of course Sangeetha had been closely monitoring his father’s photography triumphs. Father was used to show daughter Sangeetha all about details of all film rolls, lenses, lights etc.In fact father had tested all his new equipment in her presence. Hence Sangeetha had known a lot on film shooting, how to face a camera with lights on , the accurate positions to be when facing  a camera.She had added that camera equipment was like toys play for her even before she commenced her film career. During a television interview Sangeetha had disclosed that before she commenced shooting in her maiden film .She had received a letter by post addressed to her sent by father, In  the letter he had detailed many points, how to behave, correct manner to be in sets, to move with other artistes etc for her to adhere to strictly in her proposed career which he may have had believed would be a prosperous one.All these details she had adhered to and continues to date.

After her portrayal of the role as ‘Shereen , film idol Gamini Fonseka had selected her to portray roles first in film ‘Yasasa” and then ‘Nomiyena Minissu’ within a short period. Thereafter film producer and director HD Premaratne had selected her to portray the lead character in “Saptha Kanya” in year 1993 opposite competent actor Kamal Addararachchi which according to Sangeetha had been a turning point in her film career as it was a blockbuster film.For her main role she was awarded the best upcoming actress in the prestigious Sarasaviya film festival. Sangeetha had been a sought after person not olny for films but also for television commercials making her very busy. Sangeetha had become a sought after super star actress within a very short time having portrayed roles in seven films in quick succession .Her father Timothy had bought her  van for her to travel to locations when she was just eighteen years old.Among Sageetha’s generation of actresses she is  the person who had been fortunate to intermingle with many of the top ranked artistes in the country VIZ.Gamini Fonsekea, Joe Abeywickrema, Tony Ranasinghe,Roy de Silva ,Sumana Amerasinghe, Ravindra Randeniya,Malini Fonseka, Vijaya Kumaratunga, Jackson Anthony,Mahendra Perera,Kamal Addararachchi,Sanath Gunatilleke and a host of others also had been associated with directors like Sir Lester James Pieris, Prasanna Vithanage,HD Premaratne etc To date Sangeetha had portrayed roles in over fifty films out of which forty have been successful in terms of earnings, hence she is regarded as one of the most successful stars in the annals of our film industry. It should be emphasized that she may have inherited acting skills through genetic affiliations of cinematographic father Timothy Weeraratne.Sangeetha had reiterated that every individual should take correct decisions been bold at all opportunities, she admits her success to date is because she had taken correct decisions sans much of a hesitation. .

Sangeetha had been at the peak of her career when her husband Rohantha Kariyapperuma had met her for the first time in year 1999. When Sangeetha was on a film shooting exercise in Sweden Rohantha had visited along with the then Minister of Fisheries and aquatic resources along with a few businessmen attached to the fishing industry.The High Commissioner Ms Sarala Fernando had invited to dinner to which Sangeetha too had been invited at her Stockholm residence. Though Rohantha had met Sangeetha at a few functions in Sri Lanka this was a meeting that had laid the foundation for their romance. Rohantha had been a social guy who loved travelling. Even at that time he had travelled to over fifty countries was on his fifth passport. The tours had been business tours and for journeys for leisure. These had molded him as a man with a broad perspective of the world.It had been mentioned that Sangeetha had been a chatter box talking at length on many topics.

Roshantha Kariyapperuma was born and bread at Biyagama, Kelaniya. His father Windsor Kariyapperuma who was attached to the National Intelligent Bureau had died under tragic circumstances during the insurgency in 1989. He had driven his whole family – brother, three sisters and mother to Colombo.Rohantha had studied at Dharmasoka Maha Vidyalaya in Kelaniya.His childhood dream had been to become a top businessman who had built the foundation towards it when in the O/L classes. His passion initially had been for aquariums which turned into a small scale successful venture.When he was teenager still in school had owned a number of aquariums at Kiribathgoda,Makola,Kaduwela and Biyagama.Rohantha had sat in Commerce stream for his A Levels.The aquatic business he had expanded with his elder brother Priyantha into fish food and prawn food ventures expanding with the importation of aquarium equipment, had studied for an Aqua-Cultural degree in Thailand in year 1991 becoming a professional aqua culturist.

After meeting Sangeetha in Europe Rohantha had become a close friend of Sangeetha.She had added that during her filming schedules she had seen many missed calls from Rohantha. When the romance was at an unprecedented tall height both decided to marry on 6th December 2002 after realizing that the duo was made for each other.This was at a time Sangeetha was at the peak of her career winning best actresses’ and popular actresses awards Rohantha had admitted that Sangeetha is balanced mentally talking bold decisions. Rohantha too had been a following the film industry participating in ‘paduru’ parties been upto date in what was happening in the industry. Both follow deeply the Buddhist philosophy. Sangeetha and Rohantha have time to devote to mix up with the sophisticated society not like many other businessmen. Travelling, music patronizing films are common interests of the duo.The duo do hard work from Monday to Friday keeping Saturdays and Sundays for social functions while they prefer to keep Sunday keep free for leisure.Both are socially rather busy ,Rohantha abstains from smoking and drinking however takes a drink while on visits overseas.Sangeetha had admitted that sfter marriage for a period of six months she had been away from her filming engagements but had stayed at home to learn her role as a housewife.She had insisted that Rohantha’s mother too should live with them.After the death of her father she had got her mother too to live with her.This sacrifice wonder who else would do.

Sangeetha won the award for the best Actress in the Sarasaviya awards ceremony for her role as ‘Guneris’ wife is the film ‘Aswesuma”( the compensation) directed by  Bennet Ratnayake. Sangeetha was adjudicated and crowned as the most popular actress in the sarasaviya film festivals for three consecutive years from year 2001 to 2003.It should be mentioned about her role in film “Uthpalawanna” directed by Professor Sunil Ariyaratne where she portrayed the role of Upuli later the Bikkuni the much acclaimed ‘Uthpalawanna’ where she had to shave her head and clad in yellow robes.A courageous deed just after her marriage which had surprised Rohantha but he had said she is very bold. But Rohantha on seen her in the sets had hailed her portrayal.On this matter Sangeetha had been influenced by her mother’s elder sister who is also a Bikkuni.Sangeetha had  added that her hair grows. A deed no other actress would have acceded and undertaken. .

In 2000, she presented the television documentary program Gedara Dora, which was based on Architecture, Interior Design and Landscaping. It was telecast Rupavahini on every Tuesday.’[i in year 2003, after a lay-off of seven years, Weeraratne acted in a television serial Theertha Tharanaya directed by Bermin Lylie Fernando.[She launched her first production with the film, Sewwandi directed by Vasatha Obeysekera in year  2006. In year 2021, she appeared in the Raffealla Fernando Celebrity Calendar along with many other Sri Lankan celebrities Apart from Sangeetha’s Sarasaviya awards she had won Presidential award for her role portrayed in Pawuru Walalu in year 1999 ,in addition she had won ‘Critic’ award , OCIC and at in other festivals. The duo are blessed with   daughter Porshie born after a few years after marraige.Like the manner Sangeetha was brought up  she is bringing up Porshie in the similar manner.She is presently twelve years old brought up impeccably  following the Buddhist philosophy like the parents.It is learnt that Sangeetha never fails to tune to ‘maha piritha’ daily before they retire to bed.The duo often travel abroad as it had been Rohantha’s passion for long years.Porshie had been born in Canada  during one tour abroad.

Speaking to the media Sangeetha had admitted that her success has to be attributed to luck , hard work and consistent perseverance. All her fans should be very proud of her journey to stardom. She is undoubtedly a bold and iron woman who should be a role model for many to emulate. All would wish her good health and longevity…..