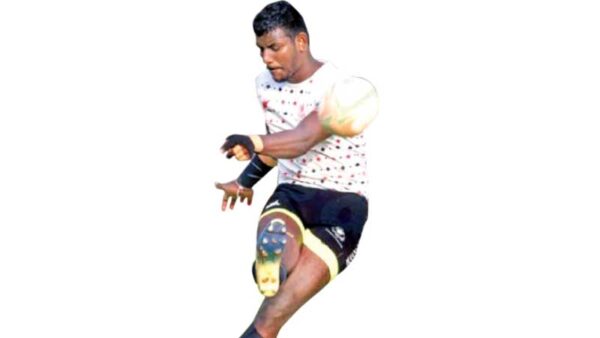 Then he went on to represent CH and FC in the inter club rugby tournament with flying colours. Presently he is playing for the Navy- sports club.

Today’s Daily News will feature this young hard working and dedicated rugby star Maduwantha, who hails from the city of Kandy.

“Thanks to my beloved school St.Anthony’s College Kandy’s support helped me to take up rugby, which ultimately led me into the world of sport”. “I’m always grateful to my loving- father, mother and brother, because thanks to their utmost support I have achieved a lot in life”.

“My most unforgettable moment was the 55 meter drop goal that I have slotted in against arch rivals Trinity College and becoming the highest points scorer in my last year’s inter school league rugby tournament, scoring a total of 112 points and over 200 points for CH and FC in the inter-club tournament was the most unforgettable incident in my rugby career”

“Thus far I’m very much happy for all my achievements and I’m a person who will never give up”.

“In my leisure time I like to listen to music and my favourite song is ‘Love the way you lie’ by Eminem, who is also my favourite singer as well”.

“My favourite rugby player is the great Johnny Wilkinson. I should say that my family and Lord Jesus is the most important thing to me in my life”.

On a concluding note Maduwantha said that he likes to describe himself as a good hearted human being who is always humble and a simple person.