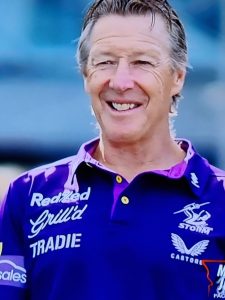 Ryan Papenhuyzen came to the rescue of Craig Bellamy’s 500 game celebration with a spectacular field goal to give a complacent Melbourne Storm a pulsating win over South Sydney in extra time.

The Storm, who jumped the Rabbitfish’s in the first half, nearly squandered their advantage when they blew a 14 point lead to let the Sydneysiders level things at full-time through a Lat

The effervescent Pappenhuyzen, cool and calm, pulled off a miraculous golden point win when the talented Backman cleverly junked through the advancing defense, then nailed a superb drop goal minutes into the deciding extra time in front of an elated home crowd for the first time in two years.

Logic at that stage clearly indicated that an undermanned and down to 12 men Storm were battling against the tide when Mitchell sealed a tidal wave field goal from 48 meters for the re-energized South’s to level scores.

But Melbourne’s fantastic coach was not to be denied of acknowledgement for a fantastic run with this great side when they pulled out all reserves and executed a predictable masterplan to seal an unlikely win.

From a Storm perspective, they continue to defy all odds despite losing key players to opposing clubs thanks to a coaching genius in Bellamy who continues to manufacture stars of the future each season.

Experts continue to write them off as poaching from within threatens to destabilise a beautiful smooth machine each year. But they regroup and repeatedly lift,  to be the envy of the rest of the competition.

The unassuming Bellamy continues to stump opposing clubs as his record will reflect.  Through his astute methods he has taken Melbourne to dizzy heights that has even his former mentor Wayne Bennett baffled but in awe of his achievements with Storm.

The champion team have always worked off a nucleus of talent that drives them to success no more so than highly skilled Cameron Smith,  Billy Slater, and Cooper Cronk, and now Brandon Smith,  Jerome Hughes and Ryan Pappenhuysen who have harnessed the talent around them to be a potent force over the decades.

As he ponders life after coaching in the foreseeable future, Storm and the Football world hope he will reconsider giving it away because of a legacy and immortality he has delivered to the game.