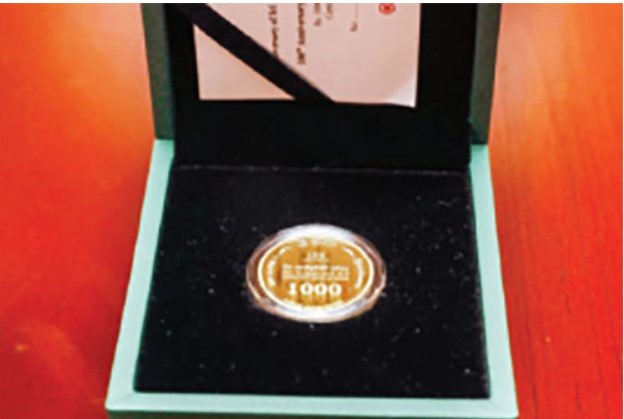 The 1,000 rupee commemorative coin issued to mark the 65th Anniversary of diplomatic relations between the Government of Sri Lanka and the People’s Republic of China, and the 100th Anniversary of the Communist Party of China was presented to President Gotabaya Rajapaksa.

Central Bank Governor, Professor W. D. Lakshman presented the coin to the President at the Presidential Secretariat on Tuesday.

The commemorative coin was issued as a special tribute to the longstanding friendship and strong ties between the two countries.

“On the center of one side of the coin is the front view of the Nelum Pokuna Mahinda Rajapaksa Theatre with the national flags of Sri Lanka and China. The ‘2022’ is shown in large numbers below the Theatre. The coin reads “65 years for Sri Lanka – China” in English, Sinhala and Tamil.

The reverse side of the coin says ‘1,000 rupees’ and “Chinese Communist Party” in all three languages.

The Central Bank has issued 500 gold and 2,000 silver commemorative coins.