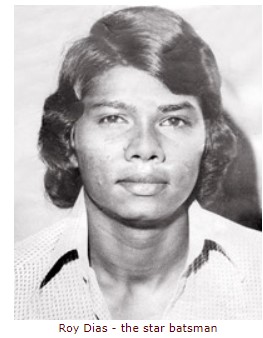 CRICKET: With the new ball ‘Duly Dented’, by Sidath Wettimuny and Bandula Warnapura – fans put aside their drinks, newspapers, snacks and what not, as the stylishly dusky pair of ‘ankles’ slid to the middle – black hairlocks dancing behind him, blue Lankan cap perched rakishly over his ears – that’s before he unleashed his ‘vibrantly’ brilliant world class batting ability

Before parking himself at middle and leg – into that lovely balanced stance of his – his superstitious routine would involve a half curtsy or half squat to loosen his knee caps… as it were. Then a couple of pushes to cover to warm the biceps.. a crispy cut or two past point to get the wrists rolling… a half volley would then be ‘caressed’ with such a lovely swing of the willow… some deft clips past square to ‘cool his boiler’ as it were – by which time the numbers would be whirring away on the scoreboard.

The ‘Dias Special’ needs a fresh line altogether… up on the ‘toecap’ of his back foot for ‘maximum height’: front foot behind the back foot, as it were – grazing the leg stump, as the bat came crashing down in an elegant arc, to bisect the hoarding boards behind cover. That would be ‘Roy’s ‘Back Foot Drive’ – as I attempt to ‘nutshell’ some of the glory of his ‘succulent’ shots.

A notch below in the batting order would arrive Duleep Mendis, armed with his ‘Baton of a Bat’ and his rat-a-tat, machine gun, style of batting to join Roy. With Dias stroking the ball and Mendis trashing the cherry – the two some truly show-cased the very splendour of Sri Lankan cricket. The double barrelled attack – a fabulous flurry of fours from both ends – would ‘fire’ the four separate ‘Papara’ bands into belting four separate melodies, in a cacophony of Lankan Rhythm – as it were.

Mounting his attack from ‘Mount’

Given life at Hulftsdorp Street Colombo 12, on the 18th of October 1952, the ‘Colt’ was soon wheeled away to No. 4 Templer’s Road, Mount Lavinia, around the late fifties or so. As his parents settled in at ‘Mount’, the restless toddler set about muddying the walls and bashing the window panes with his ‘Tennis Bat’ – aided and abetted by his famous neighbour at No. 6, the stylish Nalandian and All Ceylon opener Carlyle Obeysekere. Roy’s dad Richard, allowed his beloved ‘champ’ the freedom to flourish, turning a somewhat blind eye to the pitiful plight of his window panes and flower pots – for Richard Dias, a proud and principled man, a banker with ‘HSBC’ by profession, was also a sportsman of much repute. In fact he was the Ceylonese soccer skipper of the forties and fifties. Obviously that’s where Roy got the ‘spring’ to his dusky ankles. Roy went on to tell me that his four uncles, namely Phillip, George and Marshall manned the fabulous formations of Lankan and Saunders FC soccer, playing barefoot mind you’…. barefoot even on foreign soil in Internationals for Ceylon. A colossal bunch of ‘good genes’ being kicked about by them – which Roy picked up later in the day.

As they cradled and nurtured Roy Luke, their ‘Bundle of Joy’ – little would St. Peter’s College have realized, the extent of the ‘little fellas’ cricketing talent. Conversely Roy, was truly blessed as well – for the clean limbed Peterite could strut the Majestic Corridors of that ‘Shrine of Learning’ and be inspired by the flamboyance that walked there before him – the Heyn’s, the HIK’s, the Inman’s, the Opatha’s and the utterly charismatic Rumesh Ratnayake – with the pacie’s penchant for white headbands and crushing West Indian helmets.

Thence having skippered every possible junior side, the 14 year-old… unrazored and virtually short trousered… and going for his shots with such a delightful innocence… was rushed to the Peterite dressing room to bolster the batting of Rodney Patternotts 1968 first eleveners; sharing pegs with the likes of Denham Juriansz, Oswin Wright, Lawrence Heyn, Edward Wise, Larry Misso and Rory Inman – a good sprinkling of Burghers… and that’s before they took their colour, class and Peterite Panache elsewhere – mostly to Australia. Others who shone and sang off the same hymn sheet with our ‘legend’ – such as Lalith, Raj and Mohan Obeysekere, Edgar Tavarayan and Bernard Wijetunge are mercifully… still here with us to savour.

Dunked at the deep end

Hik’s decision to ‘dunk’ the teenager at the deep end of the ‘Wella Canal’ proved inspired. The young ‘turk’ as can be imagined battered all the schoolboy bowling that dared ‘wade’ across their beloved ‘waterway’, never huge scores – perennially the elegant ’60s and ’70s, as the right handler blazed his way to resplendent runs and the schools captaincy… initially in the year 1971 and then again in 1972… eventually leaving school; a feared cover point… an admired bat… and such a hugely loved human being.

Roy remembers with gratitude the guidance given to him by Master-in-Charge Austin Fernando, who took an early interest in the youngster – and with much warmth the pair of ‘sausage gloves’ gifted to him by Dr. H.I.K. Fernando of – brown leather – and which pair of ‘protection’ he literally took to bed with him.

On leaving school the ‘Colt’ was poached by his Peterite coach Mike Chanmugam for Colts Cricket Club – that grazing ground for Josephian and Peterite cricketing talent – at that particular point of time. Subsequently Sinhalese Sports Club – eager to adopt Roy Luke’s ‘iconic image’, lured him away from Chanmugam and Colts – to wear their hollowed colours and cap. In the early eighties Roy, cloaked in ‘four sweaters’ did duty for the tiny little town of Denton West in the Cheshire League, UK – learning to play the ‘moving ball’, better than he did. In the year 1988, with his Hamboyance flickering; Roy had a healthy stint in Holland; turning out for Amsterdam CC for well nigh 4 years; thoroughly enjoying the salubrious climes, the Dutch bowling and surely their cheese as well.

By the year 1976….oozing charm… the good looking – trendy dresser, was knee-deep in fan mail – a ‘good bunch’ of those postage stamps ‘glued’ into place by swooning ‘female fans’… whence Roy had the good sense to plump for the hand of Miss Tharanga Fernando – eventually wooing and veiling her in 1977 – to be mum to his two beloved children, Rishitha 27, who showed much cricketing potential at St. Joseph’s College and who has of now completed an engineering degree – with honours – straight A, in the ‘States’ and daughter Dileindree 18 – student with AIS… the ‘apple’ of Roy’s eye. Tharanga relentlessly remains a ‘Bundle of Energy’ – truly the wind beneath her ‘high flying husband’s’ beak and wings… as she keeps a spotless house; drives the family about; runs a business; and of all things… even manages Roy’s cricket school of a ‘hundred kids’ or more. No she hasn’t started keeping-wickets just yet… though I wouldn’t put ‘Even That’ – past Mrs. Roy Dias.

I well remember Roy ‘debuting’ for Lanka in our Inaugural Test in 1982; with Bob Willis resembling a ‘stampeding ostrich gone haywire’… studs pawing up our Borella earth… nostrils flared in fury… elbows, knee caps and golden locks all over Wanathamulla… as he thundered into Dias and comprehensively ‘fixed’ him’, lock stock and barrel for a ‘debut’ duck. Roy then set about ‘avenging’ that duck hours later with such a stylish 77 – once even slapping a Willis bouncer past leg ump Francis’ left cardrum… so deep into the confines of block ‘C’… to rest besides my lunch box.

It was in the year 1985 that our ‘high flyer’ truly raked in the runs; pounding a thousand runs in just 12 Tests’, as against Duleep Mendis’ 1000 in 11 Tests and Gavaskar’s 1000 runs in 10 Tests… in that particular calendar year. In fact Roy was the first Sri Lankan to ‘surge’ ahead to a thousand Test runs. Before that he played a huge part in getting us elevated to ‘Test’ status by knocking up 219 runs at an average of 71.33 in the ICC Trophy of 1979 – which trophy was a ‘stringent’ set up – to ascertain our cricketing mettle, prior to elevation.

Players in the ’80s were never officially ranked. Roy’s ‘classy batting’ though was picked for two World Elevens – two Benefit Matches for Deryck Murray and Clive Lloyd – comprehensively pinning his stature ‘up there’ among the ‘Best’. The right-hander was singled out for praise by ‘stars’ such as Gavaskar, Imran, Sobers, Kapil, Richards and Lloyd. Besides which Roy Dias truly epitomized the ‘spirit of cricket’. To this writer RL Dias was a delightful fusion of M.H. Tissera and A.P.B. Tennekoon; such ‘Posh Performers’ on and off the field – all three of them.

Our answer to Gower

It is the contention of many that Dias was Lanka’s ‘dark skinned right handed answer – to Englands ‘fair haired’ left-handed Gower… drawback being – fate favoured Dias with a measly 20 ‘tests’ whilst showering Gower with a colossal 117 ‘Tests’ and 190 odd innings….If only our right hander was born at Grace Road Leicestershire…. and Gower at Hulftsdorp Street, Colombo 12… the hopeless dreamer that I am. For the record Roy stroked 1,285 runs in his ‘Country’s Sweater’ – in 20 Tests at an average of 36.71 – with three hundreds and eight fifties to boot, with 109 against India as his best – in 58 ODI’s he stroked 1,573 runs at 31.49 with two hundreds and eleven fifties with 121 as his highest. In 93 first class matches Dias raked in 4,296 runs with 144 as his highes. The Tests were so few and so widely spaced. Ask Sidath Wettimuny. Following his epic 190 at Lord’s he had to hibernate for over a year for the next Test knock. By which time he had ‘pawned’ his precious bat for a ‘walking stick’ and lost a couple of teeth as well…. tongue in the tonsils that one.

Swinging in the covers

His fielding was truely an invitation to enjoy the evening as he rocked so loose limbed – swinging from cover point to extra cover – vacuuming the grass ‘clean’ of the booming cover drives and square cuts – to then dynamite stumps across the land; his ebony elbow gunning down batsmen after batsmen, as they galloped to their doom. Dias tells me that he loved to bowl medium pace – bent on exploiting the seam. Oh, yes… he could ‘bump’ the ball a bit; and is awfully proud of his 3 for 24 against the Aussies in the Benson and Hedges ‘shindig’ of 1985 in Melbourne.

From batting to coaching

By the early ’90s our ex-Test batsman had shifted his energy and interest from the ‘Rigours of Batting’ to the relative ‘Tranquillity of Coaching’. Having initially coached the Sri Lankan National Team in 1998, he now keeps a ‘stern and fatherly’ eye on Nepali potential – as that country’s official cricket coach – nurturing their nurseries… his doctrine beginning to show results now.

Roy essentially relaxes by reading a magazine or relentlessly switching the TV channels. A home cooked meal with ‘String Hoppers’, – floating over Lankan Curries – served – morning, noon and night; is the way forward to his heart – chips in Tharanga so knowingly. As I chattered away the hours at his residence at 35/2, School Lane, Nawala, the day before, the ‘Legend’ looked a tad forlorn and fettered… as he scouts around for the ‘next niche’ in his life… chalking his guard – still middle and leg – to blow out 58 candles – come the 18th of October 2010.