Roads and Bridges in Ancient Sri Lanka – by Michael Roberts 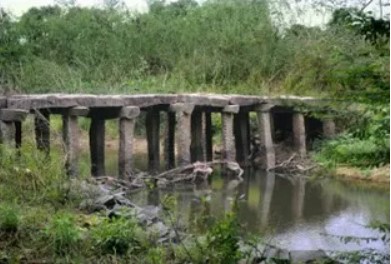 The most important feature of the ancient Sri Lankan economy was its village level self-sufficiency. The basic needs of the people were satisfied within the village community. Traveling between villages usually took place by foot as people did not usually travel long distances. Therefore, there was no need for big roads linking villages.

However, bigger and better roads were required to link the important administrative and commercial centers. During the first few centuries of Anuradhapura era, the main administrative centers were Anuradhapura and Magama in the Ruhuna. There was a main road linking these two cities. Furthermore, major roads connected Anuradhapura with the ports of Jambukolapattana (Dambakola Patuna) in the Jaffna Peninsula, Mathota or Mahatitta (Manthai) near present day Mannar and Gokanna (Trincomalee). These three ports were the most important trade centers in the Rajarata at the time.

The Anuradhapura-Dambakolapatuna Road went through Rambeva, Omanthai, Pavatkulam and Vavunikulam. This road had several stone bridges including those near Anuradhapura over the Malwatu Oya and another at Pavatkulam over the canal starting from the reservoir. Stone beams and slabs of these bridges still exist. The most famous site is the remains of a bridge at Periyapulankulama in Anuradhapura, commonly known as Galpalama (Stone Bridge).

The best-preserved ancient stone bridge is the Mahakanadarawa stone bridge, built over the Kanadarawa River in the ancient road between Anuradhapura and Gokanna (Trincomalee). The present road connecting the two cities roughly coincides with the ancient road, which is a clear indication of the technological skills of the ancient Sri Lankans.

The existing structure at Mahakanadarawa is 80 feet in length and ten feet in width. Ten feet long 14 stone beams of the size of 16 by 12 inches have been paved across it. The bridge is supported by 42 columns of 12 by 12 inches fixed on rocks on the bed of the river. The slabs of the bridge vary in sizes, the largest being eight feet long and 18 inches wide. The thickness of the slabs is six to eight inches. There are ruins of another stone bridge over the Yan Oya near Ratmale, but the bridge has not been preserved well. The dimensions of the Mahakanadarawa Bridge clearly indicate that they could support even elephants.

The road to Magama from Anuradhapura was in use from very early times. It went through Polonnaruwa, crossed the Mahaweli River at the Dastota ford and went through Mahiyangana, Yudanganava, Buttala and Kataragama up to Magama (present day Tissamaharama). King Dutugemunu led his armies against King Elara along this road. As the main link between the capital of ancient Ruhuna and Anuradhapura, this road played an important part in Sri Lankan history.

With the decline of the Rajarata and Ruhuna civilizations, some of the ancient roads, apart from those in the South Western parts of the island, were overtaken by the encroaching jungle. New roads were also built through European intervention even before the British conquered Kandy.

There are at number of stone bridges discovered  in Sri Lanka. These are in various states while some have been conserved to an extent. Out of these the most popular is the bridge over the Malwathu Oya and the best-preserved ancient stone bridge is the Mahakanadarawa stone bridge.