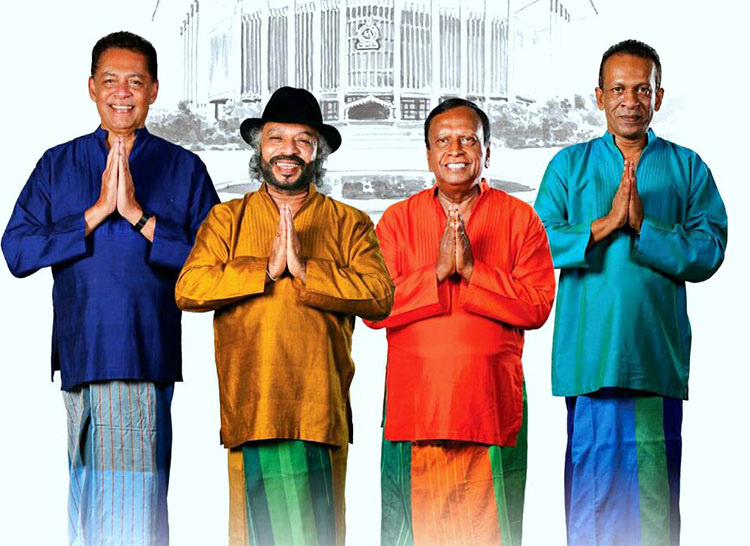 Desmond…when he did the ‘Sarama’ concert, in Colombo, along with the late Sunil Perera, and Annesley Malawana and Rajiv Sebastian

Many can’t get over the fact that Desmond de Silva is no more with us.

One year ago, on 9th January, 2022, it happened, and his death came as a shock to music lovers, his fans, his family, and to all those who knew this awesome singer/entertainer…even in a very small way.

The last time I saw Desmond perform was in Colombo, at the BMICH, and I believe it was in 2019, and he showed the audience that when it comes to entertaining, Desmond de Silva is No. 01.

Obviously, it’s with much sadness we recollect the day Desmond left this world, and his wife, Phyllis, still finds it so very hard to believe that he is gone forever.

Says Phyllis: “I still can’t believe he is gone! We were watching the Test Match, together, the previous afternoon…he was totally relaxed and making the usual comments, as armchair cricketers do. 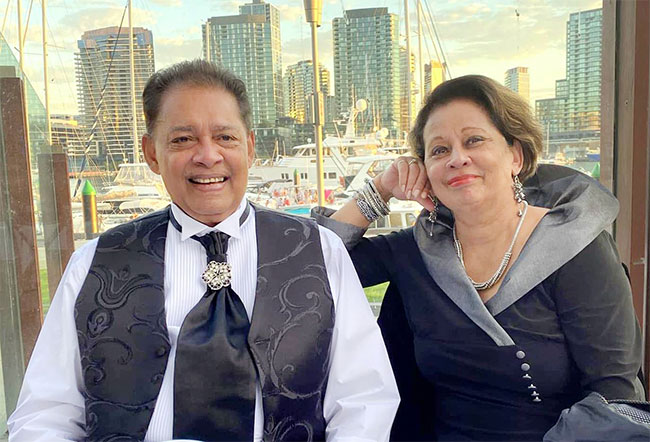 “We teased each other as we backed rival teams, but little did I know what the next day will bring forth. It is as if he just switched off a light…and was gone!

“Twelve months later, we are all feeling his loss. Family, friends and fans still find it unbelievable. He was so full of life! He had charm and charisma…. He lit up the stage! His warm personality touched many lives … not just through his music, but that he took time to mentor fellow musicians, to reach out to fans, with a personal touch, wishing them on their birthdays, or lifting their spirits through song, often sharing Dad jokes with family and friends, and always being approachable.”

Phyllis went on to say that Desmond never had his phone off and would always answer it, even if it was in the middle of the night!

“Often, he would answer a call from a friend, or fan, from a different time-zone, who was at a party, singing and dancing to his music and just needed to connect with Desmond. He always gave them his time.” 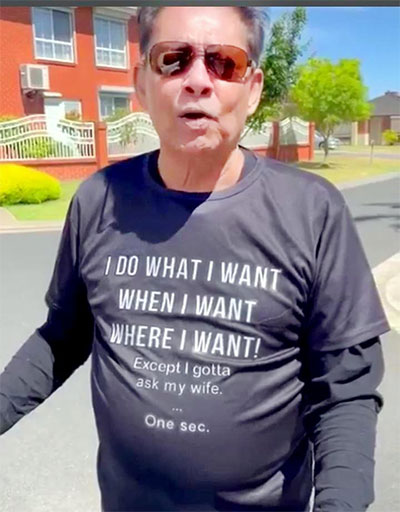 Arriving in Melbourne for, what was to be, his last 31st night performance

Phyllis says when she once asked him why he answered such calls, in the middle of the night, his answer was always “Every fan is important to me”.

His genuineness shone through for those who really knew him. For his wife Phyllis, close family, and friends, the void he has left can never be filled. “He is irreplaceable”, says Phyllis

His legacy will undoubtedly live on, and continue to touch lives, the way Desmond would want it.

In honour of this great artiste, a tribute concert and dinner dance will be held on 11th February, in Sydney, showcasing the music of Desmond’s musical journey – from The Spitfire, The Jetliners and Desmond & The Clan, to Foreign Affair (UK), Replay 6, Desmond & The Impressions, and the late Desmond, himself, via hologram.