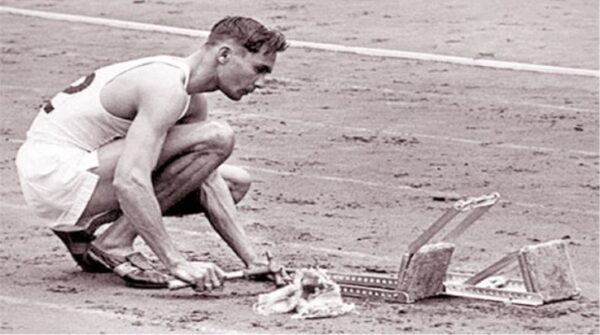 During this Olympic year it is pertinent to remember one of country’s greatest athletes Major Duncan White on his 23rd death anniversary (July 3). On his way to success, he had to glide over 10 barriers and not break them!

His early education was at Trinity College Kandy. He was the captain of athletics in 1936 when Trinity College won the John Tarbat Challenge cup and the Jefferson cup for the Relays. White won the 220yds establishing a new record, 120yds Hurdles and the Long Jump. He was a member of the Trinity Rugger team which won the Bradby trophy. He was awarded the Trinity Lion for Athletics

On leaving Trinity College, he joined the Medical Department as a Physical Training Instructor and represented the Department at the Government Services Meet. In 1937 he participated in the National Championships representing Ace Athletic Club he returned a time of 52.0 secs in September and further improved it to 50.4secs the same year. Running in the 440 yds Hurdles event he clocked 56.4 secs. In 1940 he returned a time of 56.0 secs in the 440yds Hurdle event at the National Championships. It took 20 long years to improve the record till Nimal Fernando of the CT & FC returned a time of 55.7 secs. In 1944 running for the Ceylon Army Duncan clocked 22.2 secs for the 200m, which was equalled by W. Wimaladasa of the Army in 1964. D.K Podimahathmaya had the privilege of erasing Duncan’s record of 22.2 by .1 of a second after 24 years.

In 1938 he represented Ceylon at the British Empire Games held in Sydney in 1938. He was the only schoolboy in the team. He represented Ceylon at the first Indo-Ceylon dual meet held in Colombo in 1940 and at the second Indo-Ceylon Meet held in Bangalore. At the first Indo-Ceylon Meet he won gold medals in the 400m and 400m Hurdles events and helped win the two relays. In Bangalore he won a gold medal in the 400m hurdles and won a silver in the 110m hurdles. 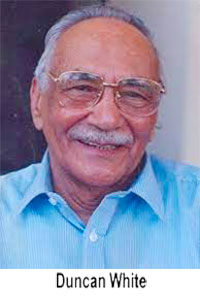 After breaking records in the National arena he turned to the wider International arena. He was a member of the first Ceylon team to an Olympic Games. That was the 1948 London Olympic Games. There was a special significance for Ceylon as it was in the year 1948 that we gained Independence from the British Empire. Duncan White won the silver medal beaten by Roy Cochran of USA by only 7/10th of a second. While Cochran established an Olympic Games Record, Duncan White too bettered the previous record.

He did yeoman’s service to the young athletes of the schools, especially the Central Schools. R.A.C. Hubert of Piliyandala Madya Maha Vidyalaya was one such athlete who did well in the 400m. I am personally aware that he had gone to Gamini Vidyalaya Benthota on three occasions. He also had helped Harris Manikkam at the Christian College Kotte athletic camps. There he had screened his final run in the 400m Hurdles at the 1948 London Olympics. C.W. Pitigala as a sharp student at that time had asked Duncan why he had looked back while fixing the blocks. He had commented on his observant nature and answered. “when I was nailing my starting blocks someone had shouted “Hey Ceylon you are late” So he had turn back and said “shut up” and nailed his blocks. While nailing the blocks he injured his finger. He ignored the injury and concentrated on the event. And the rest was history. It is a good lesson for our young athletes not to get ruffled for the slightest thing at the start of an event.

In 1964, he left for Nigeria to take up the post of Senior Lecturer in Athletics at the University of Ibadu. Later he settled down in Nuneaton, Warwickshire.

Duncan White was awarded the Member of the British Empire (MBE) in 1949 and the Helms World Trophy as the Most Outstanding Athlete in Asia.

His teammates to the British Empire Games held in Auckland New Zealand said that when Duncan White ran the last lap for Sri Lanka in the 4x400m Relay the whole stadium stood up and cheered him because it was a fantastic run. He had overtaken several runners and came fourth. Several officials had asked him why he had not entered for the 400m event.

Late Cyril Gardiner, the then chairman of the prestigious Galle Face Hotel, as a mark of respect to Duncan White adorned his name on a plaque at the entrance to the Galle Face Hotel as a distinguished guest of the Hotel. It was at this Hotel that I had the privilege of meeting the great man on his last visit to Sri Lanka.

In 1991 Major-General Denzil Kobbekaduwa had organized a Peace Relay Run from Vavuniya to Colombo to celebrate the founding of the Duncan White Foundation. When the runners who came to Kurunegala were given T shirts with the Duncan White Logo embossed. One runner while putting on the T shirt had asked another “kawdayako Duncan kiyanne.”

In 1996 the late Luxman Kadirigamar initiated and obtained dual citizenship for Duncan White.

Duncan White was conferred the honour of ‘Deshamanya’ by President Chandrika Bandaranayake Kumaratunga, celebrating the 50th Anniversary of the Silver Medal feat at the London Olympic Games.