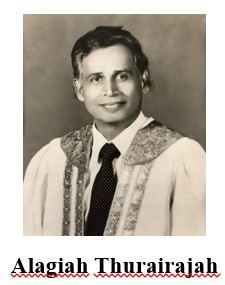 Alagiah Thurairajah fondly called as Thurai was a dedicated teacher and researcher. He taught Soil Mechanics to many students who are now spread all over the globe. A great mentor, Thurai is always remembered with much affection.

Thurairajah was born on 10 November 1934 in Imayanan, Udupiddy in northern Ceylon. He was the son of Velupillai Alagiah and Sellammah from Imaiyanan in Vadamarachchi He was educated at the Udupiddy American Mission College and Hartley College. Thurai graduated from, the University of Ceylon Colombo Campus with First Class Honours in 1957 by topping the list and maintaining a record performance. He earned the Ceylon Government University Scholarship to Cambridge University and worked with late Kenneth Harry Roscoe; he received his Ph D in June 1962: Soon his pioneering research became world famous as the Cam Clay Theory with Roscoe & Schofield with the original dissipation function he invented widely named as “Thurairajah’s Theorem.”

Thurairajah’s contribution to engineering education in Sri Lanka is amply demonstrated by the following excerpts from Professor Thurairajah Memorial Lecture delivered by Professor Sarath Abayakoon-former Vice Chancellor of the University of Peradeniya in 2016.

“I have known Professor Thurairajah in several capacities, but in my mind his soul is mostly cemented as a great teacher and a great human being. When I could select a topic for today’s presentation, I struggled initially but decided on the title “Ethics for University teachers “ which, in spirit, captures Professor Alagaiah Thurairajah

exactly. I would like to select a few such as: respect for the autonomy of others (value free expression, conducive environment), doing no harm (physical or emotional, neither tolerating), being beneficial to others and accepting responsibility, fairness and equity (treating others the way we like to be treated), fidelity and honesty (integrity, follow through, respecting procedures), dignity (dignity of all, respecting diversity, do not exchange for popularity), caring (compassionate to all, exercising duties with care), and doing your best at all times (valuing the pursuit of excellence and taking pride in your work). Professor Thurairajah engaged fully in his job and was a great teacher and administater who inspired many generations of students. He went beyond his normal teaching duties to help his students.

I remember him asking me to call all young staff members to a lecture room at 5 pm. He would come in and start lecturing us on areas beyond the undergraduate programme. The lecture would go for two to three hours. The subjects include not only geotechnical engineering -the field of his specialty- but also mathematics, mechanics, finite elements and latest innovations in Civil Engineering. He encouraged us to read scientific papers. He would give me a paper and request me to explain it to him and my other colleagues the next day. This forced learning helped us to improve our presentation skills and critical thinking skills during our postgraduate studies abroad. Some of the advanced subjects were not new to us as they had been covered in Professor’s informal lectures. Naturally all of us were at the top of the class at our respective universities.”

“I noted his strong patriotism once again. The year was 1983 and the troubles broke out in Sri Lanka. Professor Thurairajah was in Peradeniya and he was requested to vacate his house by the Vice Chancellor, apparently to protect him from a possible mob attack. They had to live in one of the student residencies with other members of the academic staff who were also asked to move there. My supervisor in Canada, who was the Dean of the Faculty sent a fax to Professor Thurairajah requesting him to come to Canada. In fact, I was aware that the Dean has organized an academic position for Professor Thurairajah at the University of British Columbia. One day, my supervisor called me into his room and showed me Professor Thurairajah’s reply. It contained two sentences. “Thank you very much for your kindness and help. But I will not leave MY country, whatever happens”

“Finally, let me add a very personal experience of mine that demonstrates how caring a person, Professor Thurairajah was. I was born and raised in Peradeniya and I was the only child for my parents. Professor Thurairajah    sensed that my parents were worried about my trip to Canada for higher studies. He visited them one day and explained the importance of higher education for me and the benefits that the country can harvest upon my return. He also knew that my father was a heart patient1 and took great efforts to lessen his agony. In fact, he visited my parents quite frequently at my home after I left the country, until he had to leave Peradeniya to assume a position at the Open University of Sri Lanka. Professor Thurairajah was a true patriot and refused many attrtactive offers for academic positions abroad to serve the mother land despite all the hardships that Sri Lankan Universities faced in 1980s. Professor Thurairajah’s determination inspired many young academics to return to Sri Lanka and continue to follow the ethical values and academic traditions that Thurairajah established as a great University teacher.”

1 Professor Abayakoon was not able to be with his father at the time of his passing away as he was in Canada doing his research work toward a doctoral degree at the University of British Columbia. He rushed home for the funeral.