Located about two kilometers away from Kandy City, Royal Bath (Rajapihilla in Sinhala) is the royal spout where Kandyan Kings (during the Kandyan Kingdom) have bathed whenever they wanted to bathe outside the premises of the Royal Palace.

According to legends, King Weera Parakrama Narendrasinghe (1707 – 1739 AD, the last Sinhalese King of Sri Lanka) had ordered to build this open-air bath stone basin made of granite on a six-foot (approximately 1.8 meters) tall granite pillar. There are three spouts in the stone basin to let out water (from the basin). The water for the bath was taken from the Rajapihilla canal that flows through the *Dunumadalawa Forest Reserve.

The kings had been brought to this location from the Royal Palace in a *palanquin by palace workers. According to legends, during the Kandyan Kingdom, there had also been a room for changing purposes. *Diyawadana Nilame was responsible for arranging the King’s bath and *Saluwadana Nilame was responsible for the Royal Wardrobe. Both officials had to be present when the king arrived here to take a bath and they were assisted by over 100 people. This place had been resplendent during the Kandyan Kingdom. At present, there is only a stone basin supported by a stone pillar.

Renowned scholar D.T. Devendra has carried out extensive research of the location. According to his description, Rajapihilla was known as Heelpenkandura as the water that flowed from the basin was cold.

According to Devendra’s records from an extract of a report compiled by a *Ratemahatmaya of lower *Hewaheta and submitted to the Government Agent, the location of Rajapihilla as the royal bathing place was due to the following reasons:

“It is believed that during the reign of *King Kirthi Siri, he caused the waters of all the natural springs in the vicinity to be weighed and tested, and the water of this Heelpenkandura was found to be the best of all. So his Majesty ordered that this stream should be kept exclusively for the royal household, and no one was allowed (except those of the royal household) to use it.”

“The King also ordered a bathroom to be built there, surrounded with a strong wall, and a gate leading to it; and also appointed two officers-one to watch the kandura and one to guard the gate; and his Majesty made it a rule to proceed thither every Wednesday in a palanquin followed by procession of tom tom beaters, musicians and others. This rule was followed by his successors.”

Devendra has also recorded observations of *John D’Oyly and *John Davy regarding the ceremonies of the Royal Bath.

“The king used to bathe daily (chiefly in warm water) at mid day, sometimes in the afternoon. Two villagers, Bolana and Lagomuva, were set apart for those who attended to the preparations for the bath. Tenants from them supplied fuel for warning the bath, and cleaned up the place, taking fortnightly turns. They took orders from the Diyawadana Nilame who with the king’s permission set a Vidane (an influential post in the native headman system in *Ceylon) over them”.

Hence, the Royal Bath (the King’s bathing ritual) has taken the nature of a ceremony. 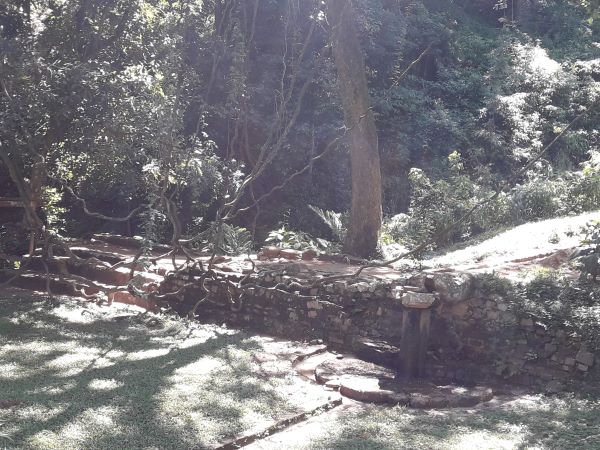 A royal resplendence of yesteryear, the Royal Bath and the bathing location used by Kandyan Royals during the Kandyan Kingdom, is at present surrounded by shrubs and weeds as well as in a deplorable condition, unnoticed by locals too.

Location – Rajapihilla Mawatha, Kandy (This place can be reached by travelling on Ampitiya Road)