Sri Lanka is a small island state in the Indian Ocean Region (IOR), strategically located at the crossroads of major shipping routes to South Asia, the Far East as well as the continents of Europe and America. Located southeast of the Indian subcontinent with a total area of 65,610 square kilometers, this tiny island with its misty mountains, gushing waterfalls, rolling carpets of green tea, pristine beaches, wildlife parks as well as historic and prehistoric archaeological sites make Sri Lanka an attractive tourist destination for travelers all over the world.

Located in Rajagalatenna in the Eastern Province, Rajagala (The Monarch’s Rock) or Rajagalatenna is a magnificent prehistoric site of immense archaeological value, yet, rarely visited by local and foreign tourists. Located 1,038 feet (approximately 316 meters) above sea level, Rajagala is situated in a sparsely populated area.

Located in *Ampara District, Rajagala is a rugged thickly forested mountain and comprise more than 600 prehistoric ruins, approximately 100 ancient dagobas (stupas), monuments as well as artifacts of immense value. According to scholars, Rajagala archaeological site is equally important as Mihintale Monastery in Anuradhapura (Mihintale – a sacred site, considered as the cradle of Buddhism in Sri Lanka).

Among the ruins unearthed to date, there are many stupas, image and monastic houses, a vast refectory, assembly halls, splendid promenades, rock ponds  as well as a gorgeous lake. There are stone steps from many directions to descend to the lake, fine example of skilled craftsmanship of Sri Lankan architects of yesteryear. There is also a traditional drinking storage facility filled with natural spring water. 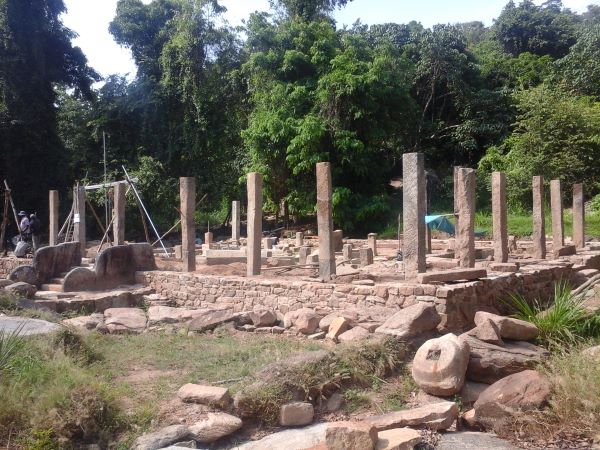 According to archeologists, the massive rock bowls used for storing water at Rajagala are the largest discovered in Sri Lanka.

The most archaeologically significant sites in Rajagala are the cave dwellings of meditating monks with their traditional drip-ledges and several stone inscriptions with *Brahmi inscriptions. There is also an incomplete solitary Buddha Statue in the premises. Ancient rock paintings, moonstones, guard-stones and marvelous wattle and daub separations, still intact are the other historically and archaeologically significant sites in Rajagala.

The stupas in Rajagala are different from those in different parts of Sri Lanka as there is a shade of a parasol (chathra), instead of a pinnacle on the top of the stupa.

Scholars are of the view that the structure of the stupas at Rajagala are of a triangular collection of identical rough-stones, the only such structures in Sri Lanka similar to stupas in the high altitudes of Tibet.

According to scholars, what projects from the summit of the stupa as a long stone column is considered to be originating from the sacred relic chamber itself, manifesting an image of the Buddha. Hence, the scholars are of the view that the stone shade is fixed as a mark of respect.

Over 200 virtuous monks including *Arhats have meditated in the caves in the past. There are stone inscriptions located adjoining the ‘Mihindu Seya’ (stupa of Arhat Mahinda) in Rajagala where according to scholars the sacred remains of *Arhat Mahinda are enshrined, indicating the arrival of Arhat Mahinda to Sri Lanka.

The ruins of Rajagala are spread over an immense area of 1,100 acres (approximately 445 hectares) of forest. But, only a small area, the site of the monuments had been cleared and there are mounds of ruins which have to be excavated in the future. Hence, an in depth research has to be carried out in Rajagala.

According to chronicles, in the past, there had been four ascending accesses from the four main directions to the plateau, yet only two accesses have been discovered. The access from the east is commonly used from the period the site was known to people, although, another longer path with steps has been added to link with the former path. Yet, the ascent to the plateau takes about one hour.

There is also another access road to the site which can be reached in a vehicle. But prior permission from the Department of Archaeology is necessary. The last three kilometers of this access route is through a dense jungle infested with wild animals such as wild elephants. Hence, visitors have to use this access road with caution.

According to folklore, Rajagala had been known as Rassagala as a *Raksha tribe had lived in the area during the prehistoric period. During the past, the area had also been known as “Girikhumbila” as the mountain range when viewed from a distance is similar to a resting crocodile.

According to scholars, Rajagala has sufficient research potential for archaeologists for another century.