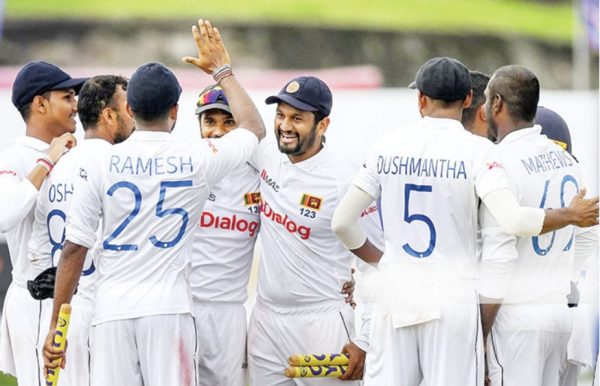 Dimuth Karunaratne leads a pumped up Sri Lanka against Pakistan, confident that they can continue the upward trend after a series levelling effort against Australia.

There’s a new energy emanating among the Sri Lankans, overriding the political and economic crisis enveloping the country and it augurs well to create a necessary distraction among the suffering masses.

Cricket among the population always takes away the troubles of the world, albeit during its limited duration, and Sri Lanka’s cricketing heroes have provided that.

The Australian tour in many ways provided a welcome avenue to quell the doom and gloom the country is going through apart from injecting much needed revenue towards an almost bare financial situation.

Australia and their fantastic band of ambassadors will be long remembered for their bravery in  embarking on a tour shrouded with uncertainty and a glum forecast pre tour.

They left after a titanic contest on the field with both teams sharing the spoils over the three format series, but more importantly with great camaraderie between the teams and lasting memories from a grateful country.

Today’s series against the strong Pakistan line up will  however not be a walk in the park for the Lankans despite their convincing last Test win in Galle.

What the curators come up with the deck for this Test will be crucial as well as winning the toss.

The Tests against Australia revealed the possibilities of providing contrasting surfaces and the opposition Sri Lanka face is very similar to the Aussies. Pakistan possess a well balanced outfit both in batting and bowling,  in fact blessed with some of the best exponents in the world.

The young and improving Sri Lanka side are building self belief and showed they can match it with the best. The now need to work on consistency to bring them back to the days of glory when the Sangakkara’s, Jayawardena, Dilshan, Jayasuriya and several others had the country on top of the world.

New coach Chris Silverwood has his role cut out in this respect and will need less interference from outside his team of assistant’s to take the country’s fortunes towards its objectives.

All eyes will be on Sri Lanka’s batting spearheaded by Skipper Dimuth Karunaratne,  Pathum Nissanka,  Angelo Matthews, double centurion Dinesh Chandimal,  Dhananjaya De Silva, Kusal Mendis and youngster Kamindu Mendis which reads like a star class line up for the future if they fire consistently.

Prabath Jayasuriya’s heroics against Australia has pole vaulted him to senior spinner in the side over the front line spinners in the country proving the importance of taking full use of opportunities presented. It was also heartening to see teenage sensation Dunith Wellelage being rewarded with his Test cap after encouraging performances in the shorter formats.

The future of Sri Lanka cricket appears on track for an upward trend after years in the wilderness.