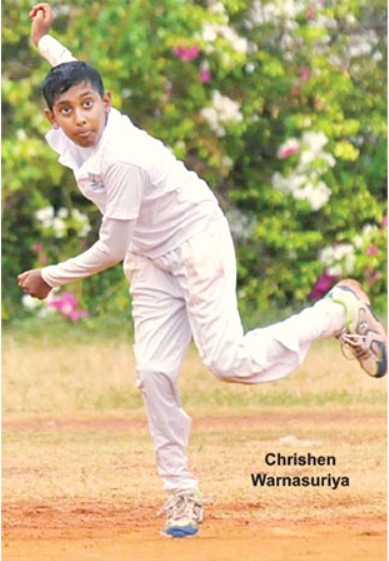 Thirteen year old Thomian & SSC bowling all-rounder, Chrishen Warnasuriya has been awarded a scholarship by a specialist cricket school based in Surrey Hills in England to study & play cricket. Chrishen is a talented all-rounder who can open batting as well as adjust to playing anywhere in the top or middle-order. Gifted with a natural “Chinaman”, left arm wrist spin action he has the ability to spin the ball both ways. In addition to playing for his College in Mount Lavinia he also represented the prestigious SSC and Champ Cricket Academy teams.

Speaking of his son, father Chrishmal Warnasuriya expressed mixed emotions over this exciting offer from Surrey.

‘Chrishen was born in London, so he’s really returning “home”, Chrishmal said trying to smile while hiding the sorrow of his son’s imminent departure. Chrishen’s mother, Dinusha and I would’ve loved to see him play in Sri Lanka and turn out for my old school, S. Thomas’ one day but it would be unfair to deny him this golden opportunity which may open up many possibilities for his future as the standard of cricket here is deteriorating each day and the youth are loosing hope. Ones future here depends on the strengyh of his or her political influence, which sadly a newly rich class with no morals or ethics seems to be exploiting in all aspects of society. Presently the cricket administration is in shambles with much public debate taking place on corruption & nepotism in selections. Even schools arein the easy habit of importing talented players from lesser privileged schools for their first eleven teams just prior to the big matches, denying deserving lads who have played for the school throughout, their due place. Therefore we thought we will permit Chrishen to explore this amazing opportunity offered to him. He could try out for a while what his country of birth can offer and then, when he’s a little bit older.’decide for himself.

Chrishen is a promising all-round student and besides his cricket he has passed all the online tests given to him by the UK school with flying colours.

The exuberant parents hoped that their son will return to play cricket in Sri Lanka some day.