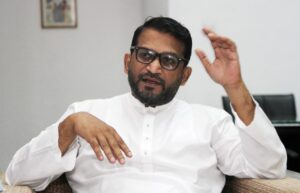 Investigations have revealed that the 303 Sri Lankans rescued and taken to Vietnam, were heading to Canada.

State Minister of Foreign Affairs Tharaka Balasuriya said that the Sri Lankans were heading to Canada from Myanmar.

He said that among the 303 Sri Lankans are women and children.

Sri Lanka has already sought the repatriation of the 303 people who were rescued from a distressed vessel and taken to Vietnam.

The Ministry of Foreign Affairs said that it continues to monitor the progress of the passengers of Sri Lankan origin who were rescued and bought to the Port of Vung Tau in Vietnam on 08 November 2022.

The Ministry of Foreign Affairs informed the Sri Lanka Navy that they had received information about a vessel carrying approximately 303 persons believed to be Sri Lankans which was in distress in the waters between the Philippines and Vietnam on 07 November 2022. The Sri Lanka Navy having contacted the vessel, informed that the crew had abandoned the vessel with the passengers onboard.

On the initiative of the Ministry of Foreign Affairs in coordination with the Sri Lanka Navy and the Sri Lanka Missions in the Philippines, Singapore and Vietnam together with the regional Maritime Rescue Coordination Centers (MRCC) based in Singapore, the rescue efforts were coordinated.

Subsequently, the Japanese-flagged vessel, “Helios Leader”, having been contacted by the Singapore MRCC, rescued the passengers from the distressed vessel. The passengers were handed over to Viet Nam authorities at Vung Tau Port in South Viet Nam.

The screening of the passengers will be done by the International Organization for Migration (IOM) in coordination with the Viet Nam authorities and the Sri Lanka Embassy in Viet Nam.

The Ministry of Foreign Affairs said it continues to work closely with the Sri Lanka Missions in the Philippines, Singapore, Vietnam and IOM for early repatriation, once the screening process to ascertain their nationality and other formalities are completed. (Colombo Gazette)