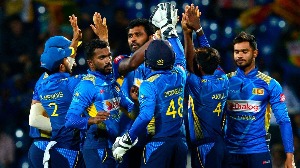 Sri Lanka will ascertain their true strength against the rampant Australians fresh from a successful tour of Pakistan.

Both teams are currently basking in the glory of series triumphs over Pakistan and Bangladesh away from home making the outcome of the current two Test series a defining moment in the Test Championship rankings.

While the tour raises questions about its priority in a country suffering from impending bankruptcy and civil unrest due to political bungling and mismanagement, Sri Lanka Cricket believes it is a justified decision to go ahead due to the revenue it will generate. The Cricket board has pledged a substantial sum of dollars generated from the games  towards urgent medical requirements the country is unable to purchase due to the current crisis.

Sri Lanka Cricket Secretary Mohan De Silva is quoted as saying it will also create a much needed distraction to a Cricket mad population who are battling severe hardship.

The timely return to form with the bat by veterans Angelo Matthews and Dinesh Chandimal has fired the Island nation’s hopes of being able to match the Aussies, and on spin friendly tracks,  the Lankans hold a home ground advantage that could unsettle the tourists.

Sri Lanka’s hopes lie in their batting which has been poor until a semblance of improvement in Bangladesh.

Up against the lethal Australian pace battery led by Skipper Pat Cummins, Mitchell Stark and Josh Hazelwood backed by off-spinner Nathan Lyon, they will realize how good their technique is against arguably the best bowling attack in the World.

The blanket of gloom hanging over Sri Lanka was given a temporary ray of light when their cricketing heroes pulled off a memorable ten-wicket win over Bangladesh in the second Test to give them a rare series win away from home.

Angelo Matthews and Asitha Fernando led a refreshing Sri Lanka revival with bat and ball as the Lankans produced a stirling effort to upset the Bangladeshis in their own backyard.

Matthews in particular showed excellent form missing out on a double century in the first Test and then producing a match winning 145 not ou in the second Test. But it was Paceman Asitha Fernando’s heroics with the ball that was decisive and swung the game in Sri Lanka’s favour.

Much against all predictions and expert opinions, I am confident that the pride of the Lion’s will raise its head and snuff out the challenge of the Kangaroos in an epic battle that will be long remembered.