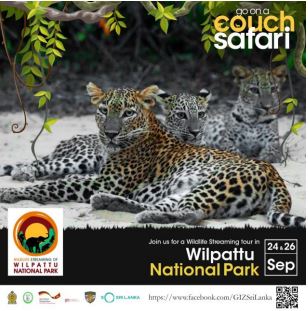 On 24 th and 26th September, the Wilpattu National Park goes live! A ‘Couch Safari’ will take viewers on a wildlife
streaming tour of Sri Lanka’s oldest and largest national park, allowing them to experience the wonders of Wilpattu
from the safety of their homes.

The COVID-19 pandemic has indefinitely postponed travel plans for many tourists and Sri Lankans alike. Sri Lanka
Tourism and the Department of Wildlife and Conservation together with Deutsche Gesellschaft für Internationale
Zusammenarbeit (GIZ) GmbH teamed up to design this initiative with the aim of promoting Sri Lanka’s wildlife to
the world whilst offering a glimpse of what awaits them, once it is safe to travel again.

“In a time where most travel plans are put on hold, we are excited to showcase our national parks to the world once
again via “couch safari” by partnering up with GIZ and the Department of Wildlife and Conservation” said
Chairperson of Sri Lanka Tourism, Kimarli Fernando.

With the successful completion of the novel ‘Couch Safari’ initiative by Sri Lanka Tourism, the team behind this
project hope to showcase what Wilpattu National Park holds in store for the viewers, who can enjoy Sri Lanka’s
amazing wildlife from the safety of their homes. Presented by wildlife experts in Sri Lanka, the first live streaming
of Wilpattu National Park is scheduled on 24th September 2021 4.00 PM- 5.00 PM IST (+5.30 GMT) and the
second live streaming on 26th September 2021 7.30AM -8.30- AM IST (+5.30 GMT). Viewers can tune into the
live stream via www.facebook.com/GIZSriLanka.

The project “Supporting Wilpattu National Park and Influence Zone Management in Sri Lanka” is implemented by
the Department of Wildlife Conservation of the Ministry of Wildlife and Forest Conservation and the Deutsche
Gesellschaft für Internationale Zusammenarbeit (GIZ) GmbH, on behalf of the German Federal Ministry of
Economic Cooperation and Development (BMZ). The project combines the conservation efforts within the Wilpattu
National Park with the sustainable development of its influence zones. The project aims to improve Wilpattu
National Park’s management capacity with emphasis on the Park Operations, Environmental and Visitor Use
Programmes, in technical and specialist terms, in support of the Wilpattu National Park Management Plan (2019-
2024).

Wilpattu National Park is located 30 km west of Anuradhapura and is well known among local and foreign visitors as
one of the best places to watch the elusive and charismatic largest cat of Sri Lanka; the Leopard. It is one of the oldest and largest national parks declared in 1938, covering an extent of 131,693 hectares. The Park is known for its
archeological heritage but much of the archeological evidence are taken over by the jungles. Out of all the ecological
features of Wilpattu, the natural water holes identified as Villus are very unique to the park as these water pools cannot be found anywhere in Sri Lanka. Villus are the main scenic attraction and animal activities around it enhance the value of this unique habitat of Wilpattu. Wilpattu National Park has recorded some 605 flowering plant species harboring rich floristic heritage of the dry zone flora of Sri Lanka. A total of 41 species of mammals have been recorded in Wilpattu, 149 species of birds, 17 species of amphibians and 57 species of reptiles. Venomous snakes such as vipers, cobras, and kraits as well as the rare and near threatened Chameleon lizard are also recorded from the scrub habitats of Wilpattu.

Join the Couch Safari and experience Wilpattu National Park from your home, as wildlife experts explain the
mysteries of the land and its creatures in this exciting wildlife escapade.