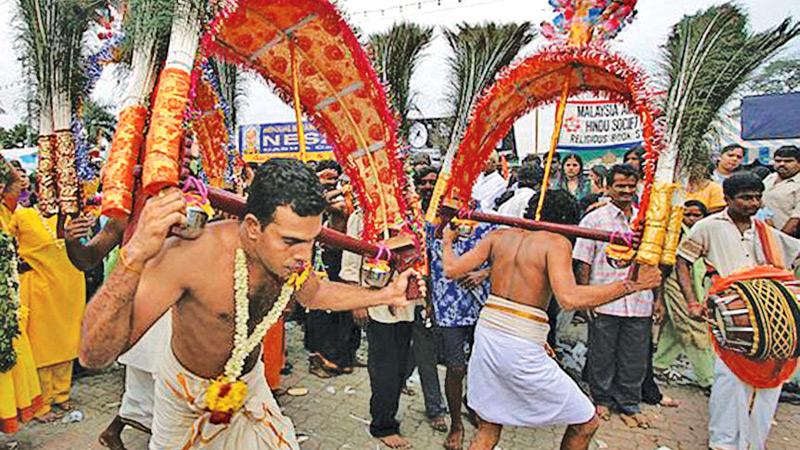 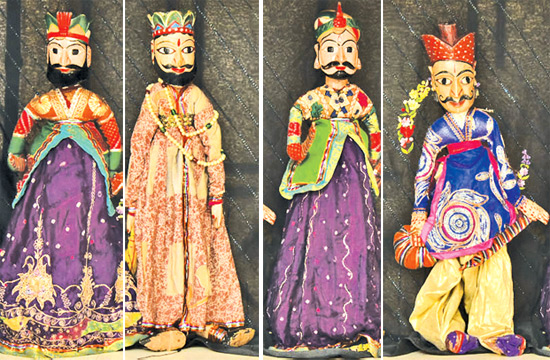 dances belong to Desi dances and they are appreciated by the elite, as well as by the ordinary folk. Some of the Tamil folk dances are practised by Tamil people all over the world in their annual temple festivals, general annual festivals and in the family auspicious functions such as puberty ceremony and wedding functions.

A popular dance form is ‘Kummi’. The songs used in ‘Kummi’, are simple and elegant, and set to folk music. The songs may be on philosophical themes, or relating to day to day life of the villagers. The ‘Kummi’ songs are sung by one female or one female sings and others join in chorus.

It is a group dance, accompanied by clapping of hands alternatively. It normally takes place at religious festivals, and social occasions. Kummi is close kin to ‘Kol Attam’. But both have developed on two different lines. Whereas bare hands are used in Kummi, instead of using bare hands, sticks of the same shape and size are used in ‘Kol Attam’ and it is presented even as a part of classical dance recitals.

The sticks are painted with different and attractive colours. In some events, the sticks are rapped with beautiful and colourful papers. This dance is also performed, in carnivals. Some categories of Adavus used in Bharatha Natyam are also used in Kummi and Kol Attam. 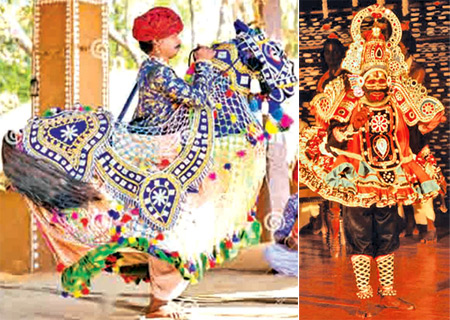 Another variety of Kol Attam is ‘Pinnal Kol Attam’. It is a very colourful and attractive dance form.

‘Oyil Kummi’ is another form of kummi. It is danced only by males. This ‘Oyil Kummi’ is normally danced only in the nights during the Thai Pongal season. Holding the handkerchiefs, in one hand, two lines of equal number of male dancers dance.

It often resembles attractive thandava stands, consequently ordinary folks call it Oyil Attam. Yet this is not much popular among the present generation of Tamils.

In the 19th century Annamalai Reddiar compiled a series of songs on Lord Muruga, the presiding deity of Kalkhu Malai temple, in Tamil Nadu. And today sometimes devotional songs are used for Kaavadi as background music.

‘Bommal Attam’ is another folk dance. It is a puppet show. The characters are made out of wood, or cloth. Puppets are activated, by strings. About 200 years ago in Thanjavoor district in Tamil Nadu this art was widely practised and acquired fame. This art is popular in Southern Indian states where the theme is Ramayana, Haricandra Nadakam or Maha Bharatha.

‘Mayil Attam’ (peacock dance) in which people dressed up like peacocks danced. This is no longer very popular.

Another popular folk dance is ‘Puravi Attam’ (fake horse riding dance). In this dance horses are made out of paper and bamboo or cloth. Through, a slit, in the back the man appears and with sticks tied to his legs and dances. This dance represents a man riding a horse. This art originated in Tamil Nadu and gained wide popularity. The accompanying music is provided by the Natheswaram but now even band is used. Especially this folk dance is widely used in Hindu temple festivals today.

‘Nilal Attam’ (shadow dance) – In this dance, dolls made out of leather are placed against the light in such a manner as to let their shadows fall on the screen. This dance is also popular in Andhra and Kerala. This dance has spread to Java and Sumatra. At Present the live program of this Nilal-Attam is rarely seen, it coud be only seen in the electronic media.

‘Karakam’ is another popular folk dance of the Tamils. Still it could be seen essentially a religious dance, in which women bearing pots on their heads and dance. These pots are filled with water and Margosa leaves. This form of worship is adapted to the worship of Amman, Muruga and Iyanar. Instead of water sometimes the pots contain a mixture of saffron or milk or other articles used in abisheka.

‘Theru Kootu’ (street dance) was earlier popular among the general Tamil population but today it is quite popular among the rural folk. This was used from ancient times. The costumes used are big masks, long shoulder Kavasam, and chest covered with beads, and wearing large skirts.

Normally the actors themselves sing or sometimes, background singers are employed. And this art has been fostered by separate families. Different types of Koothu forms in rural area are known as Nattu Koothu. These Nattu Koothu forms are generally almost related and similar to Theru Koothu.