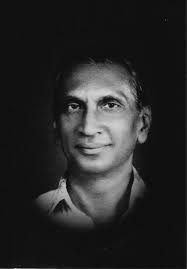 Peragaswatte Liyana Acharige Somapala (13 September 1921 – 26 March 1991 Actively involved with music between years 1940 – 1991, popularly known as  P. L. A. Somapala was a Sri Lankan singer, musician and playback singer dominating as a musician in gramophone ,radio, films and television eras, triumphant in musical instruments sitar and violin. His music genres extensively wide-ranging from pop,soul, Hindustani classical music and Indian classical music  One of the earliest pillars in Sinhala classical songs, Somapala made several contributions to early Sinhala cinema as a playback singer and music director along with his wife Chithra Somapala who has had vast singing expertise who could be easily classified alongside Ruckmani Devi, Latha , Sujatha and Anjeline.

PLA as often reminisced was born on 13 September 1921 in Maligakanda, Comombo 10. His father, A. D. Edmund, was also a stage drama producer had received his primary education at Clifton Girls’ School and his secondary education at Lawrence College, Maradana.] He left school in 1941 and worked as a clerk when he was just seventeen years old in a Maliban Street office of a rubber exporter very keen to earn a bit of money to the family as father had passed away when he was fourteen years old..

PLA had met his future wife Chithra nee Perera in year1942 when she was studying at St Bridget’s Convent. Chithra was also a singer, in 1948, she sang for Columbia records under Master U. D. Perera. They married on 27 September 1952. The duo is blessed with four sons: Prasanna, Rohan, Nalin, Chitral and one daughter, Piumi.] The eldest son Prasanna is a retired cameraman who worked in the Ministry of Mahaweli. Their younger son Chitral who had inherited hereditary music affiliations from the parents is well renowned as  a playback singer, composer and musician domiciled in Germany for over three decades having left our shores in year 1986 having defied father’s instructions been dogged and stubborn.P LA disliked any siblings taking up music as priority had been given to studies.

In a recent popular television music program, the presenter asked Prasanna whether his father was a revolutionist. The answer he gave was’ yes’ as he revolutionized the music in Sri Lanka introducing the brass musical instruments to our music replacing the oriental musical instruments. Once he had gone to Devar Suriyasena a reputed musician in the previous regime to write a foreword to a book he had authored, when it was he who was a stalwart in ancient Sri Lankan music had confirmed he is a ‘revolutionist’ in this musical field.

It was during his petite stint at the rubber company, he had learnt music from musicians T. Sandarasekara and Lionel Edirisinghe. There he had excelled in playing the sitar and violin. During this time, he worked as a sub-music director for a stage play called ‘Carnival’. The play was produced by his father wrtten by Mathupala, his elder uncle. His younger uncle A. D. Piyasena also played a child character in this play. In 1942, PLA passed as an auditioned Radio Artist. His first song was recorded with renowned musicians Sunil Shantha and Surya Sankar Molligoda.

PLA had joined the then Radio Ceylon in year 1943 as a musician playing the violin and guitar had been promoted the director of music in year 1946,later had been there when SLBC was formed and later in 1981 when the ITN was established, had left after a tenure of thirty eight long years.In year 1946 there had been a program “Watin Pitin” when beautiful talented Chithra Perera had been assigned to sing with Sunil Shantha.Young energetic PLA close pal of Sunil Shantha had been very impressed in her singing and looks has had a soft corner helping in her  endeavors, had recommended to duet this song “Bovitiya Nam” which had been one of the pioneer songs recorded to a disc at the Radio Ceylon. The first duet of Chitra and PLA was “Yamuna Yamuna Shobana Ganga”, to his own music composition a hit even today. It needs to be emphasized all lyrics of songs of the duo were only on the environment and habitat of native Sri Lanka.In years 1952 with Ghouse Master as recordist had made the music compositions of all songs under the labels ‘His Masters Voice’ and ‘Columbia’.

Concurrently at this time, he had met his future wife, Chithra Somapala. In 1946, he first sang a song duetting Chitra. He composed many songs to Chitra and together they sang several duets including: Yamuna Yamuna Sobana, Dambulu Gale and Sukomala Bada Lelawa. For this song Yamuna Yamuna Sobana, PLA  had used the clarinet for the first time, saxophone, piano, guitar, drums, double bass. This song became world renowned which the daughter of Governor Soulbury, Ramsbottom requested this song be sent  to H. M. V label which was placed on diskette and sent abroad.] In 1954, the film East in the West produced by the British Department of State Information had the good fortune of incorporating the song ‘Isurumuniya’ into a overseas film for the first time.

PLA Somapala been called ‘Pittala band Karaya” for introducing all sophisticated western brass musical instruments like trumpets, saxophones, electric guitars, acoustic drums for his melodies, for which he himself ,Sunil Shantha,CT Fernando,Ananda Samarakoon had even been banned for a short period by our administrators from musical activities. The above personnel were westernized Sinhalese personnel during the decade of 1950’s .It was the very motivative, they endeavoured to westernize our music to be in par with the music of counterparts the world over.  Chitral his son had lamented also at a television confrontation, that if not for this change the present-day music would not have been in this standard, in a firm stance to compete with foreign music melodies and bands. All present day members of all musical bands should pay tribute to PLA, Sunil Shantha,CT Fernando and Ananda Samarakoon ,all English speaking westernized individuals during that era who introduced many brass instruments some had replaced the oriental musical instruments like the harmonium, tabla, flute etc though some bands continued to perform sans the brss instruments in that era.

On 4 March 1955, he debuted as a film music director with the blockbuster film ‘Asoka’ directed by Sirisena Wimalaweera produced by some businessmen in Colombo. PLA Somapala composed the music for the film and composed music in all the songs which were instant hits been extremely popular and all the songs were reproducing the tunes from reputed Hindi and Tamil films. Some songs were taken from the Hindi films Anarkali and Dosthi and from the Tamil films Avan. Some songs such as Katharagame, Pem Geethe and Sumihiri Paane were recorded twice in Sri Lanka and in Madras for commercials. But when he was criticized for replicating Tamil and Hindi tunes, he commenced his own unbelievable musical compositions to delight all audiences.  This was the commencement of directing music in more than fifty films until the dreaded cancer took his life in a cruel manner, unfortunately when his bright future was deprived.

From the decades of 1950 audiences loved Hindi songs.But with the advent of PLA era introducing the brass musical instruments like clarinet, saxophone, piano, Hawaiian  guitar, accordion etc., despite protests PLA continued with them which had reaped huge benefits to date to all musicians to be in par with all foreign counterparts. It is said even some so called ‘Prabuddha” vocalists too had hesitated to be backed by brass musical instruments even in the 1960’s, but progressively, now all resort to his flairs. In this scenario the services PLA had made to our music genre enormous beyond expression. He had courage and nerve to cross the traditional boundaries sans any fear. PLA even had authored three books in western music containing  musical notes elaborating on quarter note, half note, sharp, semi tone, dotted note etc., for the benefit of all musicians. This had helped a lot who were used to playing the ‘piano’ which was a popular musical instrument in English-speaking middle-class families.

All the songs composed and directed by PLA for the film Deepashika were popular but were imitated from Indian film songs which was the typical design in that era. PLA Somapala . Chitra duo won the Swarna Sankha Award for Popular Film Music Director in 1966. They have performed in overseas countries like London, Paris, Wales, California, and Geneva with distinction. However, very sadly in the late 1983, several people accused PLA of replicating Hindi melodies. But, he stated that he inserted a series of local lyrics to a Hindi song presenting  it through a series of melodies that touched the emotions of the local fans. On Sunday, 18 May 1952, PLA had written wrote an article published in Lankadeepa  newspaper entitled ‘Why do I do hybrid music?’ in response to criticism. Most of his film songs were written by Karunaratne Abeysekera where all of them became prevalent. All other songs were composed by Sarath Wimalaweera,Herbert M Seneviratne,Susil Senadhira, Piyasena de Costa,AM de Alwis etc., with lyrics on environment, habitat, domain of native motherland sans a single love song which is also a characteristic of the ‘Peralikaraya”.

In 1991, PLA had visited India for an eye surgery where he later died of cancer on 26 March 1991 at the age of sixty-nine years, in India diagnosed with dreaded cancer which deprived music fans to enjoy his music creations when he was at his peak having directed music in a film even in the beginning of that year too. His demise shocked his music fans not only in native Sri Lanka but domiciled in many foreign states all over the globe. It is certain that a music phenomenon and genius of the caliber of PLA Somapala  would never be born in native Sri Lanka for centuries.