Located at a height of approximately 200 meters and situated to the north of popular Sigirya Rock Fortress, Pidurangala Rock was not a popular tourist site until recently.

Pidurangala Rock has a long history believed to date back to the 2nd century BC. According to ancient chronicles, *King Kashyapa (477 to 495 AD) had built a monastery at Pidurangala (for pious Buddhust monks who previously resided at Sigiriya Rock) and donated it to the monks before the King resided at Sigiriya Rock. The King had enlarged the Temple and monastery before relocating the monks to the Temple. The caves and flat terrain spread across a large area had provided solitude and seclusion for monks. The surface of the rock has been carved to form grooves to prevent rain water seeping into the caves.  There had been five buildings at the Temple Complex known as ‘Panchavasa’, some of which can be seen at present too.

According to research conducted by *Prof. Senarath Paranavithana and *H.C. P. Bell, Pidurangala is renowned for the 49 1/2 feet (approximately 15 meters) reclining Buddha Statue constructed in brick, clay and limestone, the largest (brick) reclining Buddha Statue in the world. In 1960s, treasure hunters have partially destructed the Buddha Statue by hacking the head off and carried it away, although it has been reconstructed. Yet, the Buddha Statue has not been restored to its original position. There is a fence in front of the Buddha Statue with a 7th century inscription that states the name for Pidurangala Rock. According to the inscription, a donation of fields and gold ‘pidu’ (offering), ‘ran’ (gold) and ‘goda’ (heap) or pidu-ran-goda (in Sinhala meaning an offering of a heap of fields and gold) which had later become Pidurangala (gala meaning rock in Sinhala).

There are two entrances to the Cave Temple with the first through a recently constructed temple with a pure white stupa and large statue of the Buddha sheltered by King Cobra *Muchalinda Naga Rajaya. The second entrance to the Cave Temple is situated at the base of the rock that leads to the old temple. 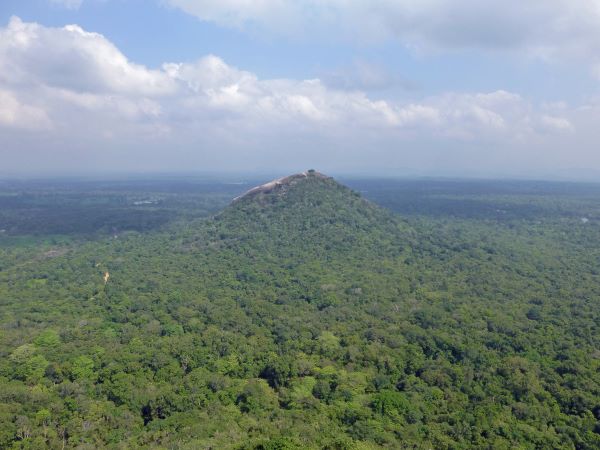 Pidurangala Rock mirrors the popular Sigiriya Rock in many ways as they are both volcanic hills rising out of jungles and are steeped in history and legend. As the upper surface of Pidurangala Rock is steeply sloped and is of solid rock, large scale construction activities had not taken place in the premises.

Approximately 30 minutes after pleasant hiking, visitors can reach the reclining Buddha Statue. The rock caves which have been the abode of Buddhist monks are also situated in this location. According to folklore, the location of the Buddha Statue in Pidurangala Rock is linked to Sigiriya Fortress as the Lion’s Paws of Sigiriya Rock Fortres is situated at the same elevation and worshipers of King Kashyapa’s palace including the King had stood between the Lion’s Paws and worshipped the Buddha.

The temple at Pidurangala Rock consists of a dagoba (stupa), a shrine room, a Chapter House, a pirivena, a bodhigara (house around a *Bodhi tree), an assembly hall and a preaching hall. There are also caves in the Temple Complex.

The hike to Pidurangala Rock commences at the ticket counter located at the bottom of the hill. There is a well-maintained staircase to Pidurangala Sigiri Rajamaha Viharaya (ancient Buddhist Temple), a white colored temple situated above the ticket office. The Temple building has been constructed in the 1930’s. But the cave paintings had been done thousands of years before similar to a smaller version of the *Dambulla Cave Temple. The inscriptions on the cave ledge confirm that the caves had been donated by chieftains and dignitaries to the Bikkhus (Buddhist monks). As Buddhist monks have inhabited Pidurangala during diverse eras of history, there is a plethora of archaeological finds belonging to different periods.

Although, there are nooks and crevices which lead in diverse directions, these paths are not used at present. These paths would have been used decades ago. Hence, it is advisable to utilize the brick or stone steps that are in place at present.

The path to reach Pidurangala Rock is well-maintained up to Pidurangala Cave Temple. Thereafter, the hike to the summit of the Rock takes around 30-45 minutes and is an adventurous hike as the path is over large rocks and boulders. There are some spray-painted signs to direct travelers. There are thousand year old steps hewn into the rock during the first section of the hike of which some are large steps. The path leads through the jungle and is covered by trees. The second section of the hike commences after the reclining Buddha Statue, the site of the old cave temple. Although, the path is challenging from this location as it is between large boulders, a person with average fitness can climb it. 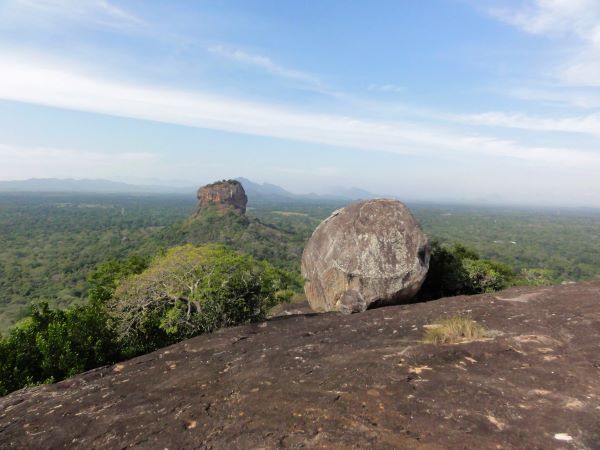 Many visitors commence their hike during wee hours to watch sunrise views or during late afternoon to observe sunset views from Pidurangala Rock, a mesmerizing panorama… During sunrise, the vistas from the Rock are spectacular, an explosion of color suddenly lighting up the surroundings, a mysterious and mythical view…

According to visitors, Pidurangala Rock is the best location to take photographs of Sigiriya Rock Fortress and surroundings.

As the hike to Pidurangala Rock commences at the Pidurangala Raja Maha Viharaya, a Buddhist Temple and a venerated site of worship, it is necessary to maintain its serene edifying atmosphere when visiting the Temple as well as its environs including the surrounding hiking area. It is also necessary to dress modestly in appropriate attire (covering shoulders and knees) and walk barefoot inside the temple premises as it is considered a sign of respect similar to visiting Buddhist Temples in Sri Lanka. As the Temple is located during the initial portion of the hike (approximately 100 meters), visitors can wear shoes thereafter.