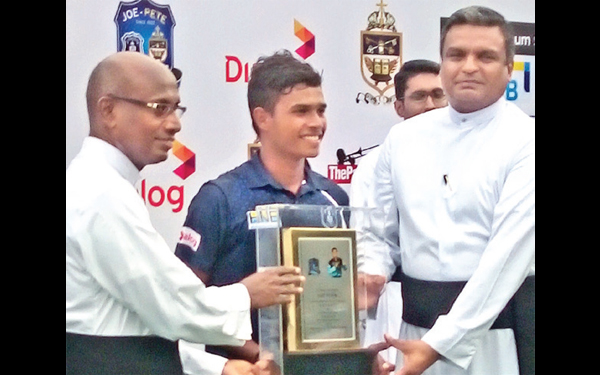 In fact skipper Wanuja Sahan was the match winner scoring a fluent unbeaten 102 well supported by all rounder Danal Hemananda who scored useful 81 to build up their innings .The pair added 174 runs for the seventh wicket.

St Peters in their innings were struggling 61 for 6 at one stage .However Skipper Wanuja Kumara stroked a brilliant century to rescue St. Peter’s along with Danal Hemananda, who made a fighting 81. After posting 245 on the scoreboard the Peterite spinners bowled extremely well to

restrict St. Joseph’s to 219 while Spinner Niman Umesh was pick of the bowlers taking 3 for 34 .

Josephian chasing 246 runs had a record-breaking 147-run stand for the second wicket by Shevon Daniel and Sadeesh Jayawardene. The Josephian Captain Daniel was the more aggressive but unfortunately missed his century with 91 while wicket keeper Sadeesh Jayawardena made 61 but the Peterites came back to the game strongly.

At one stage Joseph’s required 70 runs to win in the last 10 overs with 6 wickets in hand. Dunith Wellalage and Hiran Jayasundara kept St. Joseph’s in the hunt, despite the required run-rate nearing 9 runs per over but experienced Wellalage was out for 28 Peterites ensued their victory to take Rev. Fr. Peter Pillai Memorial shield .