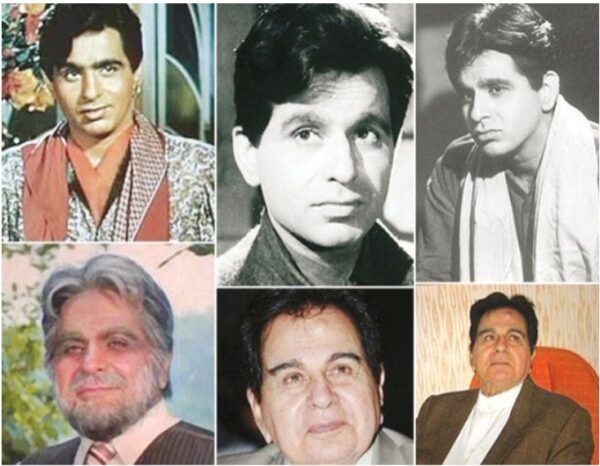 I have always strongly endorsed the necessity for actors to possess a reasonable degree of social responsibility. The actor who is adored by millions of people owes something to the society, which has given him an elevated and highly respected position. – Dilip Kumar

Dilip Kumar was born in Peshawar (which is now in Pakistan, but then part of India) on December 11, 1922, and died in Mumbai on July 7, 2021 at the ripe old age of 98. Named Mohammad Yousuf Khan at birth, he was better known and idolized by his stage or industry name Dilip Kumar. He was the oldest and the most renowned surviving representative of the Golden Age of Hindi cinema. Considered as the brightest and the most creative period of Hindi cinema (both artistic and commercial) by historians of the Indian film industry, the Golden Age spanned more than two decades from the late 1940s to the 1960s. 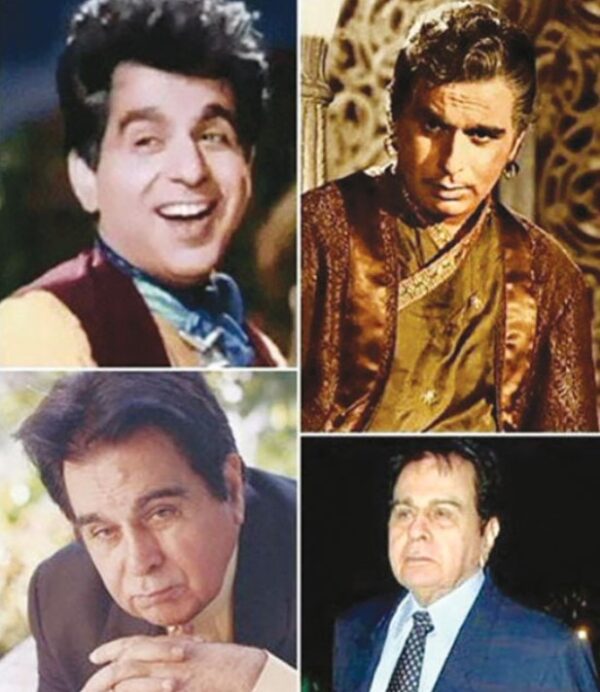 The artistes and their works were nationally and internationally acclaimed: Neecha Nagar won the Golden Palm award at the Cannes Film Festival in 1946; Mother India was the first Indian entry for the Academy Award for the Best Foreign Language Film in 1958, and got shortlisted for the same; Dilip Kumar was approached for a role in British director David Lean’s Lawrence of Arabia (1962), but Dilip didn’t accept the offer because he was so choosy about the films he did. Being one of the ‘Big Three’ of that era (the other two were Raj Kapoor and Dev Anand), Dilip Kumar graced the Indian cinema’s centre stage the longest, even beyond the Golden Age.

While the above extremely simplified background note may be adequate to give the readers an idea about the glory of the Golden Age of Hindi cinema, even for me, belonging to the older generation of Sri Lankans, the Indian cine artistes of that time, and their films, were no more than fast receding echoes from a past, lost in the dimming brightness of a golden sunset; in other words, I had only a nodding acquaintance with that era of Hindi cinema. (Today I hardly watch Hindi films, but I listen to Hindi songs, particularly, the new renditions of Golden Age classics.) I myself had seen only a couple of the last of the Golden Age Hindi films before the 1980s.

However, thanks to modern technology in the form of the Internet, they are available to us on the computer screen at a click on a relevant link and at little cost. This, no doubt, is a great boon to those old-timers like me who are besotted with Hindi films and film music of that vintage. It is doubtful whether the average young Sri Lankans of today could experience the linguistic (Sinhala and Hindi being sister languages belonging to the same Indo-European language family) and cultural affinity we still nostalgically feel with the characters and incidents in those classic Hindi films. Of course, we can’t blame them if they fail to see anything remarkably great or interesting in them just as many film-goers of the previous generations find nothing absorbing in the average Hindi films on offer today that are obviously much loved by youngsters; it’s only that times have changed. At the same time, we shouldn’t forget the fact that there are enough young fans of old Hindi films who admire them especially for their music. This essay, written to mark the passing away of a demigod of Bollywood, is dedicated to all lovers of the great Hindi movies of the Golden Age, and all admirers of the heroes and heroines that starred in them.

As stated at the beginning, Muhammad Yousuf Khan (later ‘Dilip Kumar’ to the film world) was born in Peshawar (now in Pakistan) on 11 December 1922. His father Lala Ghulam Sarvar was a fruit trader who had orchards in Peshawar and in Deolali in Maharashtra, India. Lala Ghulam moved to Bombay (modern Mumbai) with his large family of 12 in the late 1930s. Dilip went to Puna (now Pune) somewhere in the early 40s. While engaged in a canteen business there, the young Yousuf Khan was spotted by actress Devika Rani, wife of Himanshu Rai, the owner of Bombay Talkies, himself an actor.

When in 1964 he played the role of a youthful, rebellious, anarchist law graduate in Leader, he was already into his middle age. But he continued to work in films till 1998, that is, just past his 75th birthday. He withdrew from films for a short five years from 1976 to 1981. Dilip Kumar and his contemporary Raj Kumar played the lead roles in the 1991 mega movie Saudagar based on the drama of a feud between two estranged childhood friends, Veeru Singh and Rajeshwar Singh (played by Dilip and Raj Kumar respectively); a forbidden love affair between their grandchildren (Manisha Koirala and Vivek Mushran in the film) is a sort of sub-plot, as critics have correctly shown. 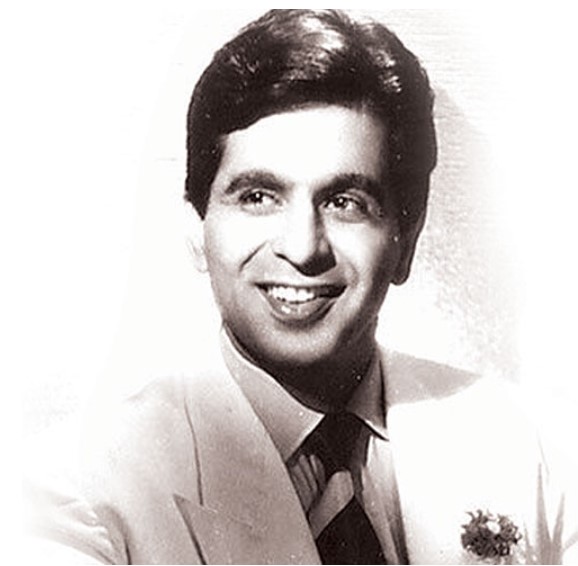 In his nearly sixty years in films he acted in over 60 films. This is against the 72 films that his erstwhile sweetheart Madhubala managed to do within a comparatively short span of less than 20 years. In the case of Madhubala, only 15 of her many films became successful at the box-office, and she did not win any awards (which, however, was no reflection on her abilities). Her fault was that she apparently didn’t think of choosing her films with care. Dilip Kumar said, commenting on this lapse on her part, years after her death: “Had she selected her films with more care, she would have been far superior to her contemporaries.” Dilip Kumar himself exercised forethought before he signed on to do films. It is known that he rejected a role in his friend Raj Kapoor’s film Sangam, which later became a big hit. Similarly, when the British filmmaker David Lean invited Dilip Kumar to take up the role of Sherif Ali in his film Lawrence of Arabia (1962), he declined the offer. This role was played by the Egyptian actor Omar Sherif with great aplomb. Dilip was not the sort of man to later regret his decision to reject certain films that became successful. He had character, and he believed in his principles.

Romantic alliances between stars excited great interest among their fans then as they do now. But such relationships were less raunchy and had fewer cheap publicity stunts than what we hear about nowadays. In the case of Dilip Kumar, there were at least five women who were romantically linked with his name. It appeared that Dilip and Vyjayanthimala enjoyed proper professional rapport, and made a good screen couple. They acted in seven films together. That was the largest number of films Dilip did with a single female colleague. Though they were romantically linked by cine gossips, there was no evidence of any such serious connection between them. Actually, there were four women in his life in a serious sense, but Vyjayanthimala was not one of them.

Kamini Kaushal who starred in Chetan Anand’s award winning Neecha Nagar (1946) was the first woman Dilip got romantically involved with. They wanted to marry, but the girl’s family forced her to marry the brother of her dead husband instead, for she was at that time a young widow. Then it became Madhubala’s chance to form an alliance with the handsome actor who had thus been thwarted in his first affair; they gelled marvelously in their professional and personal lives, though she was more than ten years younger than Dilip. Unfortunately, Madhubala’s family bonds, especially those with her father, put paid to their six or seven year long affair (1951-1956).

In 1966, Dilip Kumar got married to beauty queen Saira Banu who was twenty-two years his junior in age. Saira has said that she fell in love with the man when she was only twelve. Then in the early 80s (1981-83), Dilip had a brief marriage with a Pakistani woman called Asmaa, after which he returned to Saira Banu, and remained with her until his death. Perhaps Dilip Kumar never reached the ideal of perfect lover in real life, which revealed his feet of clay, confirming the authenticity of his humanity.

However, he was meticulous about guarding his honour in his professional and personal relationships with his female co-stars, as actresses like Nimmi, Vyjayantimala, and Nanda attest in the ‘Reminiscences’ section of Dilip Kumar’s autobiography “Dilip Kumar: The Substance and the Shadow” (Hay House India, 2014) compiled by Udayatara Nayar. The last of the three stars mentioned above, Nanda (1939-2014) was the youngest. After many years of dreaming of getting a chance to act opposite Dilip Kumar whom she had adored so much, she was able to work with him in ‘Mazdoor’ (released in 1983) and she said to herself, “Now your track record is complete, Nanda!” Nanda died in March 2014, about six months before Dilip’s autobiography was published.

Dilip Kumar was a conscientious performer; he was a true professional who employed conscious artistry. He was “the ultimate method actor” according to Satyajit Ray. Amitabh Bacchan described Dilip as the greatest actor ever. Shahrukh Khan once said: “No one can copy him, and idiots like me try to copy him.” Acting as compere at a function to felicitate the celebrated senior actor, Sharukh by himself unrolled the red carpet for him. When Dilip was awarded the Filmfare Best Actor Award for the eighth and last time in 1982 a number of mega stars of younger generations than his (such as Dharmendra and Rajesh Khanna) had already come and gone, or were in decline.

While Dilip Kumar was thus honoured by the industry, he was also honoured by both the Indian and Pakistan governments. In 1991 the Indian government gave him the Padma Bhushan Award, and later, in 1994, the Dadasaheb Phalke Award. He was also nominated to the Rajya Sabha, the upper house of the Indian parliament for a term. The government of Pakistan conferred on him the title of Nishan-e-Imtiaz in 1997. Dilip was honoured with the CNN-IBN Lifetime Achievement Award in 2009.

An opportunity to serve the nation as a politician came to him when he was nominated to the upper house of the Indian parliament. He served in this capacity from 2000 to 2006. Just as he did in his chosen field as a professional, Dilip Kumar played a conscientious role in politics. He dedicated his efforts to bringing the Indians and Pakistanis together, and in this he succeeded to a certain extent. He didn’t allow politics to shake his belief in principles. The Kargil War, fought between India and Pakistan (both nuclear states) from May to July in 1999 provoked by alleged Pakistani intrusions along the line of control (LOC) between the two countries, led to much anger and agitation on both sides. Following the Kargil conflict, the Shiv Sena chief Bal Thackeray demanded that Dilip return the Pakistan government’s title given him the previous year. Thackeray wanted Dilip to do this in protest against “that country’s blatant aggression on Indian soil”. Predictably, the latter refused to do so. His explanation was:

“This award was given to me for the humane activities to which I have dedicated myself. I have worked for the poor, I have worked for many years to bridge the cultural and communal gaps between India and Pakistan. Politics and religion have created these boundaries. I have striven to bring the two people(s) together in whatever way I could. Tell me, what does any of this have to do with the Kargil conflict?”

This was in consonance with his claim in a TV interview: “I have always strongly endorsed the necessity for actors to possess a reasonable degree of social responsibility. The actor who is adored by millions of people owes something to the society, which has given him an elevated and highly respected position” With such personal political and socio-ethical attitudes Dilip Kumar proved that he was not just a successful celluloid hero, but that he was a real-life hero.

The substance endures, though the shadow has vanished.