Home  ⁄  Article  ⁄  “Pass it on” – A choral journey spanning half a century– Prins James Alagaratnam
Aug 6, 2021 Posted by Canadaadmin In Article Tagged Pass it on”

It was August 1967, the parish of St. Mary’s Church, Colombo had just welcomed its new assistant parish priest Fr. Claver Perera. Together with parish priest Fr. Joe de Mel, St. Mary’s had a resurgence in parish activity.  Fr. Joe’s philosophy of having an active youth community, favored Fr. Claver, who invited some of the younger choristers to listen to a collection of music he had assembled while in Rome. Those of us privileged, to listen to his dream of a youthful choral group needed no persuasion, and the St. Mary’s Choral group was born. The following narrative relates the progress of the group, and the influences that sustained choral music through the years. Good choral traditions are abundant island wide and the Colombo choral scene has been, and continues to be alive.

In Early Decemebr each year, the Ceylon Police Band and choir, conducted by Inspector Gerry Paul would hold their annual Christmas Carols at The Havelock police grounds. I recall, our mum and aunt walking my siblings and I, down to the police park to witness this event.  The Ceylon Police Band was trained and conducted by Mr. Arthur Fernando. The crowd and choir would be led by Inspector Gerry Paul, through traditional and popular Christmas carols. The Police Carols, as it was known, culminated with a grand fireworks display. Mum a multitalented musician amazed us by playing any musical instrument and before entering wedlock, was the music minister for the Pentecostal mission in Jaffna and Kandy. Her musical genes must have been inherited. In our teen years.  Stephen, and I with our neighbor Brian Fernando, harmonized as “The Nightingales”. 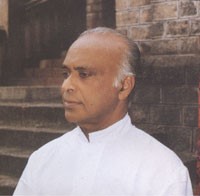 At St. Peter’s college, we would experience and enjoy the disciplines of choral singing, thanks to the influences of Fr. Marcelline Jayakody, Fr. Mervyn Weerakody, Douglas de Niese and Prof Earl De Fonseka, who trained generations, through the years. Many a musical, has been produced using

school going Peterites. “Trial by Jury”, was one such, directed by Douglas Ferdinands, and Edward Dias with Nihal Fonseka, Sandy Reimers, Anton Karunaratne and Stephen Alagaratnam in the cast. In the lower classes Miss Noreen De Silva assisted by Miss Barbara Joachim were live wires in channeling talent onto the stage. St. Peter’s had a tradition of producing tenors, the likes of Tony Don Michael, Bede De Zylwa, Nihal Fonseka, Gerard Puvenaygam, Fritzroy Jayetileke, Stephen Alagaratnam, Nimal Samaranayke, Maurice Wijesinghe and many more. Bede and Nihal would continue professionally as tenors on stage, and radio. There were good bases voices as well. Douglas DeNiese, Rohan Jayewardene, Kevin Ruberu, and then our basses in the choir, Raj, Milroy, Alan, Louis, Kumar, and Gene, together with my younger brothers, Geoffrey and Herbert. come to mind. A recent source in my musical memoirs, Alex Van Arkadie relates, Prof. Earl’s personal persuasion to get members to choral practices. Choir directors, who had to handle so many personalities to sing as one, had their own methodologies. For writing this memoir, I owe thanks to Alex, my several siblings including, Stephen, Alan deNiese, David Sansoni, Jeanette Edelmann, Lois Roberts, all who have been part of, and are an immense source of choral history, in Colombo, Sri Lanka. A turning point in St, Peter’s College singing traditions came about after the return of our very own old boy, ordained a priest from Rome.  Fr. Claver had the distinction of being the tenor soloist at Propaganda Fide, the pontifical choir and at the Sistine Chapel. That same year, in 1966, I won the college vocal music prize, from sixteen strong competitors. The highest entrants on record till then. The large number of entrants would have impressed and encouraged him. I would not meet him again until he returned as our assistant parish priest at St. Mary’s Church, in 1967.

I was already a new recruit to the St. Mary’s Church choir which included some of the biggest names in sacred and secular music. With music direction under Prof. Earl, and organist Vincent Rodrigo, the church choir was the popular choice for weddings, that included soloists Lorraine Abeysekera, Bede de Zylwa, and many other known singers. Some of us, count ourselves in this elite, as we rendered a solo or two, by request. The traditional Easter Services, Christmas carols and Christmas midnight mass were conducted to an overflowing faithful. Pam de Silva, and Neville De Cruse of the original choir still keep the Sunday 6.30 p.m choir alive. Pre 1960’s was an era of musicians trained under Spencer Shepherd, Lylie Godridge, who also trained the famous “Blind Choir” of Colombo South. Some valuable vocal lessons of messrs. Shepherd, Douglas Ferdinand’s, Gerald and Joan Cooray. were shared with me, through close association of Choir associates, Neville De Cruse and Gerard Puvenaygam.

Fr. Claver, with his experience of singing in Rome, and a yearning to continue Choral, A Capella and Gregorian music, enlisted Stephen’s help in collecting an all-male choir. Under the patronage of Fr. Joe and assistance from then, Rector of St. Peter’s, Fr. Mervyn Weerakody the St. Mary’s Choral group was formed. This was an assemblage of anyone who wanted to sing irrespective of race or religion. Fr. Claver had the assistance on keyboards, of young and talented Nihal Basnayke. The first group of singers who practiced the Italian mountain songs, famous choruses and uplifting hymns, were an unlikely mix, comprising of a core group of my brothers, and the Tilakawardane siblings, together with Gerard Puvenaygam, Francis de Almeida, Raj Philip, and later joined by Joe Mustapha, Nilu Fernando, Alan De Niese, Milroy de Silva, Gerard Cabraal. We were a motley crew, whom some would refer to as, the Bambalawatte boys. The joy of our practices was the camaraderie shared.

Among the Colombo colleges The choir of St. Thomas, Mt. Lavinia, was reputed for their Christmas tradition at that time. Old Thomian, Russel Bartholomeusz and Lucien Fernando directed and provided accompaniment for the choir.  Lucien doubled as the organist at St. Michael’s all angels church, Polwatte, famed for their traditional church music and radio broadcasts. The Cantata Singers, under the direction of Satiyendra Chellappah, Lylie Godridge and The L.G.Singers, Gerald and Joan Cooray in charge of the Philarmonic Choir were some of the other regularly heard choirs. The “Catholic Choral Society” under the direction of Fr. Ignatius Perera, had Fr.Basil Gabriel of St.Joseph’s college, Prof. Earl and a host of accomplished musicians and singers complimenting them as the Cardinals official choir.  The list of members of this traditional choir included many known Catholic musicians of the era. They excelled in Motets and Madrigals, by Palestrina. and Monteverdi, and were internationally acclaimed for the high standard of music presented. Their traditional concert on the feast of St. Cecilia was always a sold out event. The Bambalawatte boy’s choir’s emergence, at first did irk Fr. Ignatius, but he would later agree “more voices singing to god is a good thing.” 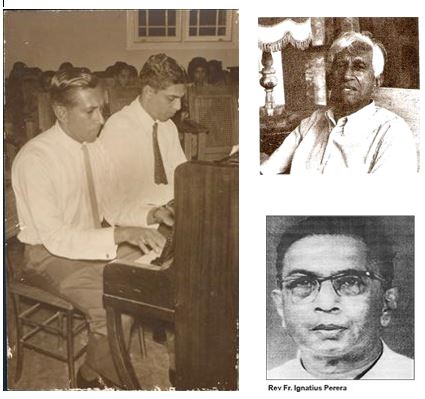 Far left: two profs on Keyboards Earl deFonseka and Valentine Basnayke at one of their rare duets on piano. Inset above; Earl De Fonseka. Below; Fr. Ignatius Perera.

The U.S.I.S, sponsored Broadway producer Bert Stimmel to produce Cole Porters “Kiss Me Kate” that included an all new cast of leads that included Sherin Obeysekera, Lal Senaratne, Iranganee Gunasinha, and Stephen Alagaratnam in the lead roles. Local audiences thrilled to the favourite tunes of Porter, accompanied by the Symphony Orchestra under conductor Earl de Fonseka. One of the highlights was the rendering of “Brush up your Shakespeare” by the two mobsters played by Nimal Senanayke and Kevin Ruberu. Theatre goers who were fortunate to witness the robust male ensemble, delivering the Chorus “Women, Women” in “Lehar’s, The Merry Widow, agree that, such a rendering to date is unparalleled. I do digress in my reminiscing, but one cannot write of the St. Mary’s Choral Group without mention of the influences of other musicians and choirs.

Among our early appearances, The St.Mary’s choral group competed in the first all island festival of choirs contest, held at Ladies college, Colombo. Starting with the first bars of A- Capella renditions of “Neve Non Toca” and following up with one, of our range of mountain songs”-“Quel Mazolin di Fiori”, the winners were a foregone conclusion. Ladies College was a regular venue for symphony and choral concerts. The choirs of Ladies College under the guidance of Christine Perera, as director, presented regular recitals. Following the success of The St. Mary’s Choral group, we presented two concerts in 1967 and ‘68. The first was with other well known, artists for a fund raiser, variety at St.Peter’s college hall, titled “Loveliest Nite of the Year”. When the curtain parted to reveal our first public appearance, the audience responded positively to the appearance of a fresh choral group of young men dressed in colored shirts, and not the traditional bow tie, compliment.  The collection of Italian mountain songs and choruses we sang, had not been heard before and was well received by the full house. In addition to Lylie, The Italiares, Winston Jayewardene, the concert showcased the talent of the Bambalapitiya youth. We followed up with a second program, at the Lionel Wendt with guests, Lorraine, Bede, and Lylie, titled “Serata Italiana”. 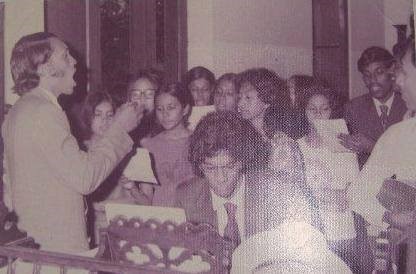 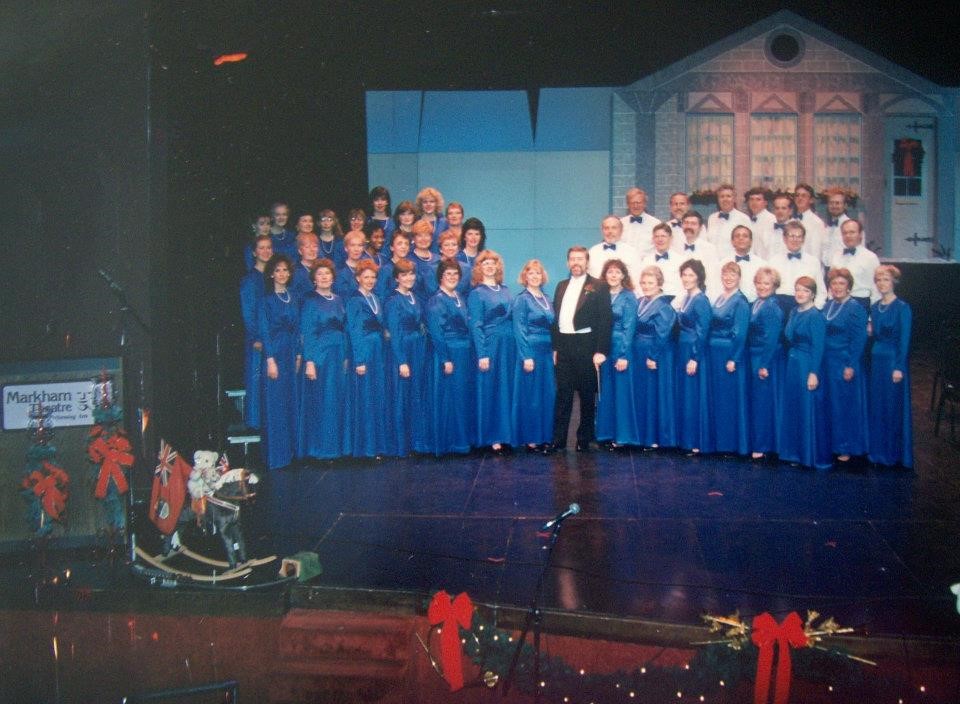