Power trio Pat Cummins, Mitchell Starc and Josh Hazlewood are braced for the possibility of becoming a solo act in Sri Lanka, for two Test matches at famously spin-friendly Galle.

On Australia’s last Test visit in 2016, Sri Lanka won by 229 runs in just three days at the seaside venue, and bowled a grand total of five overs of pace in the match. 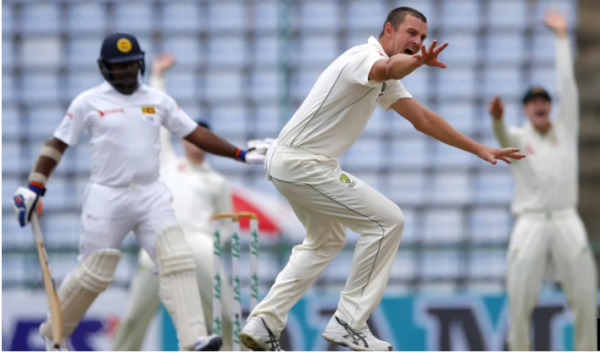 While Mitchell Starc was in the middle of the most destructive series of his career, Hazlewood and the allrounder Mitchell Marsh were far from penetrative.

It’s those memories – and the success of Australia in adapting to Pakistani conditions earlier this year – that have Hazlewood and company prepared for a scenario whereby captain Cummins and all-rounder Cam Green are the only fast bowling options selected.

“It’s probably me who is a bit slower in air speed who drops out on spinning wickets, and we could even go with one less quick here in Sri Lanka,” Hazlewood said from Colombo.

“Galle can reverse swing, last time there was quite a strong wind across the ground, so reverse swing came into play there with the abrasive surface. Sri Lanka only bowled two overs of quicks for the whole game, so that tells you what wicket we might get.”

As if to underline Hazlewood’s pragmatism, he admitted not being overly annoyed about getting dropped after the Rawalpindi Test, so barren the surface had been.

“After playing on that first wicket I was pretty happy I think to sit on the sidelines for the next two – it was quite hard work,” he said. “We’re lucky to have Cam Green there to cover a lot of bases.”

That 2016 tour was a rude shock for an Australian team that entered the series as heavy favourites, after going to the top of the world rankings with victory over New Zealand in Brendon McCullum’s final Test match appearance at Christchurch.

This time around, Hazlewood said that the recent success in Pakistan, plus a greater collective wellspring of experience and knowledge, puts the tourists in far better position. This is not to say Sri Lanka enter the series without hope – they just defeated Bangladesh away, under the tutelage of the ex-England coach Chris Silverwood.

“Coming here last time there were a lot of guys, if not their first subcontinent tour then probably second or third, and we were still quite young and inexperienced,” Hazlewood said. “We were No. 1, but we’d played a fair bit of cricket at home and in New Zealand as well.

Back then, Hazlewood was more or less a Test match specialist, but on this tour he seems a more likely selection in the Twenty20 team, having become one of the world’s most improved short-form operators over the past three years.

“I could see the couple of World Cups coming up in T20 cricket and wanted to poke my nose back in at the IPL,” Hazlewood said. “So I jumped in for the Sixers [in 2019-20] for the last couple of games, and we ended up winning the semi and the final against the Stars. It was that period where I made a conscious effort to get back into T20 a bit.

“It was so hard before that with just logistics, how tours were overlapping other tours and you sort of had to pick and choose what you wanted to play for Australia. So I just took that opportunity to play the BBL and that led to playing for Chennai for a couple of years and more games as time went on, getting a bit more consistency in it, and here we are.”