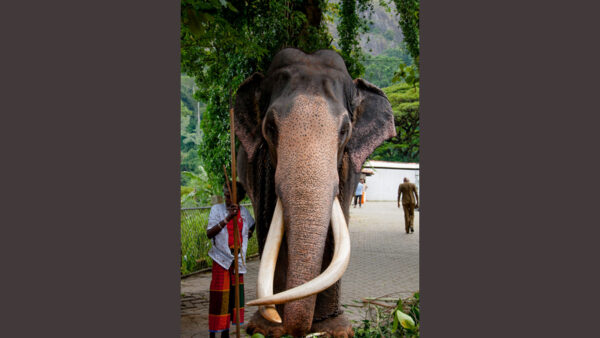 If there is one animal that reflects strength, majesty and intelligence it is the Asian elephant. Elephants have been associated with our nation since the time of our ancient kings. The elephants contributed immensely to help build the amazing structures that still stand to this day as historical monuments of history. From irrigation dams, temples and royal palaces the elephants made their silent contribution in the moving of logistics. Our ancient history reveals that elephants were also shipped to other countries. Elephants were trained to augment spear wielding infantrymen when kings went to war. Kandula is the famous elephant of King Dutugemunu whose exploits in the battlefield are recorded in our history. To this day, the Sri Lanka Army keeps an elephant named Kandula evoking this tradition. 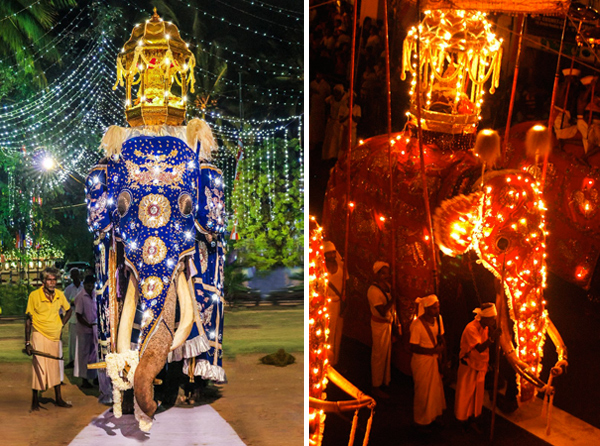 Nadungamuwe Raja at the Dalada Perahera in Kandy

The majestic aura and intelligence of these amazing Sri Lankan elephants were subsequently integrated into cultural and religious pageants. Regarded as one of the most vibrant and spectacular religious festivals in Asia, the Dalada Perahera of the Temple of the Tooth in Kandy is a celebration which proudly parades many trained and tamed elephants. It is opined that the tradition of the Sri Dalada Perahera can be traced to King Kithsiri Mevan of Anuradhapura.

The oral tradition from ancient Ceylon states that King Keerthi Sri Rajasinha (1747–1782) is the founder of the Kandy Perahera. This is one night that rejuvenates the ancient Kingdom of Kandy to its bygone glory, delighting local and foreign onlookers. The use of caparisoned elephants in religious festivals has been debated for the past few years, globally, but here in Sri Lanka it is intricately bound to our culture. 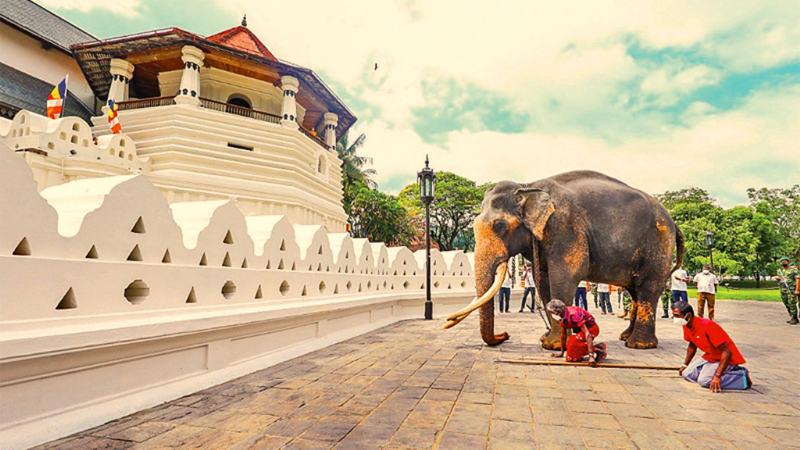 A few years ago whilst driving past the Bellanwila Temple, I gazed upon a majestic elephant. I realized that it was the tusker venerated by millions of Buddhists. Nadungamuwe Raja towered above the other 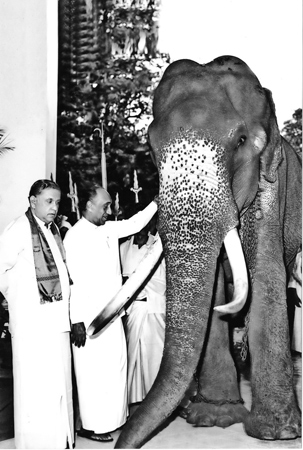 elephants present on that day. His crossed tusks gave him another distinction. In spite of his commanding and imposing physique he was a gentle giant. Shortly children at the temple gathered in awe around this iconic tusker of Sri Lanka. Having seen him many times on television I was mesmerized by his regal appeal and calm disposition in real life.

Weeks later I was able to contact his kind owner Dr. Harsha Dharmavijaya, an amiable gentleman who has known this tusker for decades. Nadungamuwa is the quiet village where the tusker resides. Dr. Dharmavijaya is an Ayurveda physician, just like his late father who was a famous physician. He explained, “This tusker has been in the care of our family since 1978. He was born in India in 1954 and belonged to a Maharaja (the 25th Maharaja of Mysore, Jayachmaraja Wadiyar Bahadur). The Maharaja had become seriously ill and a native physician monk from Ceylon traveled there to cure him. Once he recovered the grateful Maharaja rewarded the monk of Nilammahara (from Piliyandala) with two baby elephants. After a few years the monk could not maintain the elephants and interestingly Raja was sold to a timber mill in Horana, where he had to engage in work lifting and moving logs. My father had heard of him and he realized the value of this elephant. A few days later we went to see the tusker. My father loved this amazing elephant and purchased him. From that day Raja has been with us ever since. He is part of our family. Since the time of my great grandfather we have been taking care of elephants.”

Nadungamuwe Raja now 67 years old belongs to a clan of Asian elephant known locally as Saddhantha Kula (Magnificent Tribe) and displays the characteristic hathpolaya – seven features that define this unique elephant caste. Even as a young elephant he was impressive, standing at ten-and-a-half feet, a giant in comparison to the others. His long tusks enriched his majestic appeal. For decades he has been under the loving care of his mahout Wilson Koddithuwakku, an amiable man of few words. Wilson is a humble man. With decades of experience he perfectly understands the body language of this tusker who represents Sri Lanka, to the world. Wilson wields gentle control over this powerful elephant that is revered as the prince of all temple elephants in Sri Lanka. 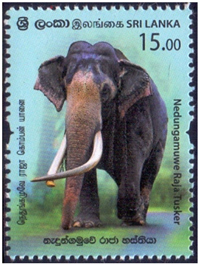 Dr. Dharmavijaya added, “As you can see Raja is a big tusker and he requires a special diet. We feed him with coconut palms, jakfruit palms, kitul palms and an assortment of fruits – pineapple, mango and bananas. He requires many kilograms of food a day. He likes his occasional treat of jaggery. He also consumes lots of water from our well. He is taken for a bath to the river by mahout Wilson. The elephant likes the walk to and from the river. Elephants enjoy a refreshing bath. Raja never liked travelling in a lorry. As all Sri Lankans know he walks almost 85 kilometres to Kandy to partake in the Esala Perahera. It takes him seven days, but he walks patiently. This is his annual routine. Each day he will stop at a temple on the way, where he is given a bath. People line the streets to greet him and some offer him fruits.”

In 2005, the tusker was nominated to be the main bearer of the sacred Karanduwa which carries the Sacred Relics of the Buddha. The elephant adapted to this role as the ‘central tusker’ since then. He is caparisoned in a special costume that takes 180 knots to secure. He wears an embroidered hettaya (jacket) and honda wesma (trunk cover), gigiri walalu (anklets) and bells. My Buddhist friends say that once the Karanduwa is placed on his back, the magnificent tusker becomes aware of his noble religious obligation and his being resonates with a different vibe that enriches the entire pageant.

As the colourful centuries-old procession moves along Kandy Lake, Raja is the centre of attraction. Hundreds of tourists come to see him in his moment of acclaimed splendour. Reminiscing about the training of the tusker Dr. Dharmavijaya said, “We initially kept a soft mattress on his back. He had to get accustomed to the straps. Later we placed a chair to teach him balance as he walked. Months later he would be ready to carry the sacred casket. We monitor his health daily as elephants can get swollen feet, joint pains, worms in their digestive tract and even arthritis. He has always been in good health.”

Dr. Dharmavijaya has rendered a great service in caring for our beloved tusker.  Nadungamuwe Raja has transcended religion and culture and is loved by all Sri Lankans. 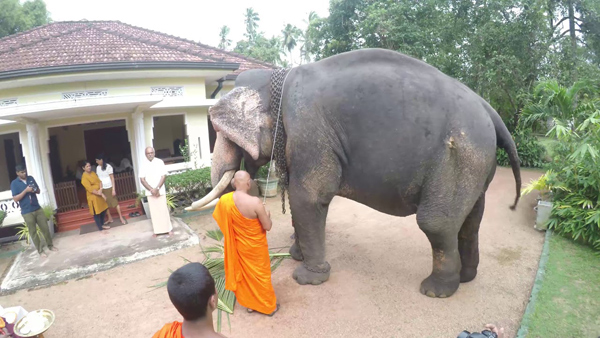 Nadungamuwe Raja says goodbye to his family before leaving for Kandy. 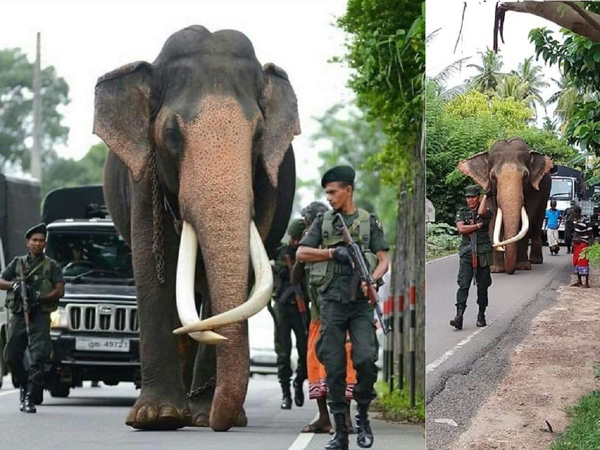 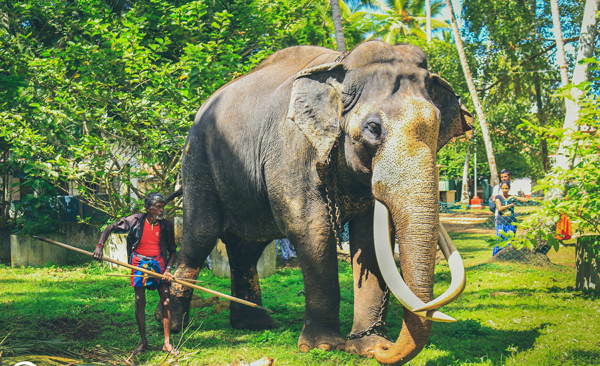