Okanda Devalaya: Where God Skanda once lived – by Mahil Wijesinghe

The rock boulder of Okanda Devalaya at Kumana

“The wild, the free, the beautiful”, a fascinating pictorial book by legendary photographer, the late Nihal Fernando, published over four decades ago has impressive images of Sri Lanka’s nature, archaeology and wildlife. Growing up, his books were my bedtime favourites, with each picture telling a story of its own. 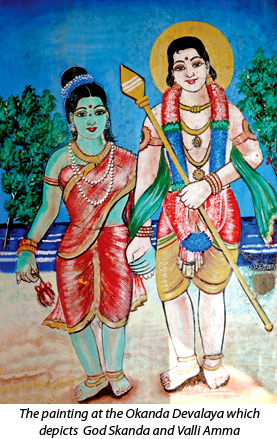 I would look at his pictures every day, sometime for hours at a time. They never got boring, they never got old. A photograph that impressed me most and remained firm in my memory was a black and white depiction of a Hindu hermit meditating near a waterhole by a huge rock at Okanda.

Being enamoured with the image, I long cherished the idea of visiting the location from which Fernando clicked the evocative picture decades ago. Not so long ago I got the opportunity when together with a group of friends I visited the Okanda Murugan Kovil or Okanda Kataragama Devalaya – venerated by thousands of Hindu devotees – in the deep corner of Kumana, the edge of the Yala East National Park, and traced the spot where Nihal Fernando had photographed the hermit.

Modified and turned into a commonplace cement structure, sadly, there is nothing here to remind one of the evocative black and white depiction.

This well-known ancient Hindu temple is at Okanda, Ampara in the Eastern Province, about 145 kms South of the Batticaloa town.

Okanda is not more than 15 km from Panama, the last coastal village with basic facilities, before you reach the destination.

The narrow sandy road from Panama to Okanda extends Southwards parallel to the coast, dotted with several large and small salt water lagoons and dense forest patches, which are all part of the Kudumbigala Sanctuary.

On our way to Kumana (Yala East National Park), my friends and I spent a night at Okanda, lulled to sleep by the sounds of the temple bells and wild animals in the surrounding forest.

The Okanda Devalaya consists of many buildings used by pilgrims. These are deserted for most parts of the year. But come July, the atmosphere changes.

It is the annual feast of the shrine, which is always held on a grand scale and attracts thousands from all parts of the country, especially from the Northern Province.

The Okanda Devalaya is believed to be the location where God Skanda or Murugan (Kataragama Deviyo) landed in Sri Lanka in his golden boat. The boat which turned to rock, still stands on the Okanda beach, known to all as the ‘Ran Oru Gala’ today.

The following morning we visited the Okanda Devalaya with the rocky boulder buffeted by the forest canopy on one side and a tranquil corner of the east coast on the other. On the summit are two small shrines believed to be dedicated to Valli Amma. In front of one of the shrines is a beautiful natural pool that gives the place beauty and a sense of calm.

After a while we reached the top of the rock and held our breath, not so much from exertion as from the awe-inspiring view from the pinnacle of the rock, of a forest dense and green, bedecked in a lagoon and coast, giving in vibrant shades and depth.

There are legends aplenty surrounding the Okanda Devalaya dedicated to God Skanda. One has it that God Skanda came from India with his servants in two huge canoes and landed on the Okanda beach.

The two canoes turned into what is now known as Ran Oru Gala, found on the shores of Okanda. The other legend is that God Skanda had been to Kataragama through the Yala forest, met Valli Amma and had brought her back to Okanda, married her and spent some times in the Okanda Devalaya.

The Okanda Devalaya is regarded as one of the most sacred shrines in the Northern and Eastern Provinces by Hindu devotees. For many, making a journey on foot to take part in the July feast is an enduring ancient tradition.

The foot pilgrimage which lasts a month and which begins in Jaffna and winds its way through the Okanda Devalaya and the Yala National Park to Kataragama for the annual Esala Festival, is popularly known as the Pada Yatra.

Usually, over 1,500 pilgrims from the Northern and the Eastern provinces arrive in colourful processions at Okanda to commence their week long walk through the thick jungle of the Yala National Park to the shrine of God Skanda in Kataragama.

The devotees pray to God Skanda seeking his blessings and take part in the Feast at the Okanda Devalaya prior to commencing the final leg, which is another week long walk through the jungle of Kumana and Yala Block II.

The serenely peaceful Okanda Devalaya is a hive of activity during July, with thousands of pilgrims arriving at the shrine to participate in rituals in honour of God Skanda and rest their weary limbs under the huge banyan trees in the vicinity. When the feast ends, the Okanda Hindu temple reverts to its serene self, reminding one of the cycles of life, of rest, rejuvenation and rebirth.