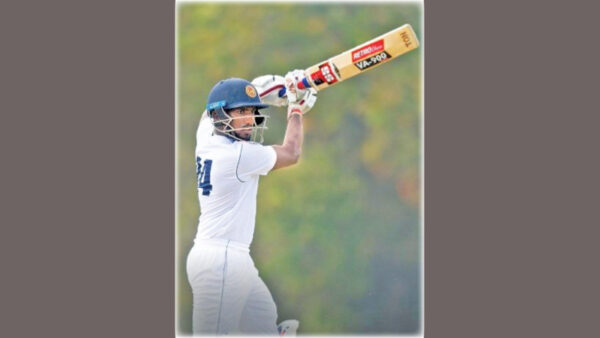 The promising cricketer Nishan Madhshka stole the limelight in the ongoing Emerging cricket team tour of England when he scored a remarkable knock of 269 in 496 balls with 37 fours and 2 sixes with a strike rate of 68.62. He came to the middle as a number three batsman occupying the crease for 496 minutes (nearly 8 and half hours ) to build up his marathon innings which is his career best first class knock as well as first first-class double century.

Madushka, who also kept wickets for 137 overs, was in fine form as he finished with 269, breaking a 27-year-old record by the legendary Aravinda De Silva of the highest individual score by a Sri Lankan on English soil in First-Class cricket.

Aravinda de Silva scored 255 against Kent 27 years ago and young Maushaka was able to break this record with his marathon knock. He is the wicket keeper of the side having kept wickets during the first day of this Kent game then came to bat after departure of skipper Nipun Dhananjaya in the fifth over of the innings. 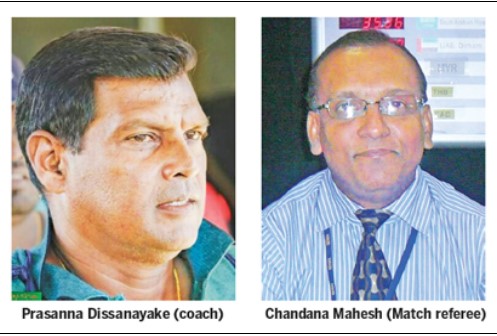 A product of Moratu Maha Vidyalaya, the 22-year-old right hand wicket keeper Nishan Madushka’s performances was remarkable and he has showed his potential very well on the England soil said his Moratu MV coach Prasanna Dissnanayakle who was also the former Moratu MV under 19 cricket captain in 1985. I am very happy about young Madushka’s performance. He has good skills and from the under 13 team I was lucky to guide him as a coach. Madushka captained Moratu MV in all age categories under 13,15, 17 and under 19 and he got a chance to play five years in a row at the under 19 team. As an under 15 player he was able to represent college first XI team and he got good exposure from the beginning, said coach Dissnayake who is presently coach of Lyceum International.

“I had the privilege to guide Madushka from the beginning. He always maintained a high mentality as well as kept his fitness to continue this sport. He is not from a rich family having a very talented brother Isuru Fernando who is playing for the Moratru MV under 15 side”.

Madushka was lucky to represent National under 19 team and after leaving school presently playing for Ragama CC in the domestic tournaments also played for Jaffna side during recently concluded National Super League cricket tournament.

“He always tried to stay a long time at the crease. If he stays more than one hour at the wicket he could easily go for the hundred. Madushka is always very close to me and even today he called and chatted with me . Before this England tour Madushka came to my home and got my blessings and he is a dedicated cricketer. He is a silent character but his dedication is very high and his vision is to enter the National team”, said coach Prasanna Dissanayake .

Meanwhile the present Moratu MV cricket coach Chandanas Mahesh who himself was a former cricketer of the school and Sri Lanka ‘A’ player said Madushka is a real quality stroke maker. He couldn’t maintain consistent batting recently and now he is getting better and showing his potential. Chandana Mahesh who was also a former talented right hander further said Maduishka is developing his skills day by day and his dedication is always very high. As a cricket umpire and present match referee of SLC Chandana Mahesh has more opportunity to observe Madushka’s talent.

“I personally chat with this player and always encourage him to go forward and give advice to play long innings. He is showing big improvement and our college OBA, Principal and staff are really supportive of all players at this stage. The former Moratu MV cricketers late Sarath Fernando, late Lucky Rogers Fernando and Ajantha Mendis already represented the National team and Sri Lanka ‘A while I also got a chance to play for Sri Lanka ‘A’ . I am sure Madushka is going to be Moratu MVs next National player. I have to give all credit to school coach Prasanna Dissnayake who played under me at the college first X1 team to produce this type of cricketers”, concluded Chandana Mahesh.