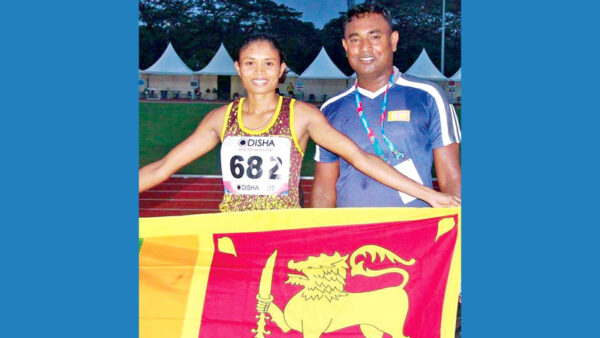 The dream of every athlete is to represent the country at the Olympics. Nimali Liyanarachchi from Sooriyawewa, Hambantota eventually fulfilled her dream when she received a Universality place to compete at the Tokyo Games. 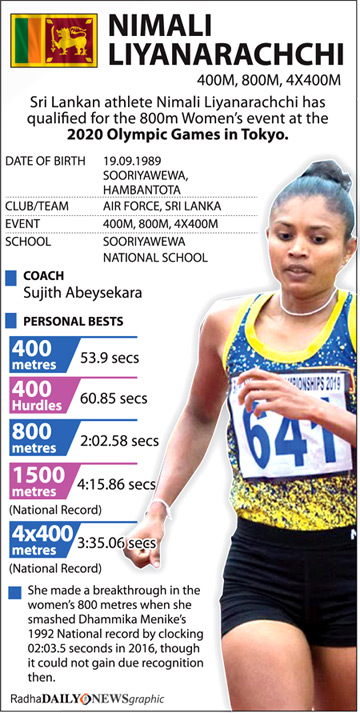 “Until the last minute I never give up hope. I could not reach the required standard and was placed third at the Inter-State Athletics Championships in Patiala, India,” Nimali revealed.

“I had to walk more than four kilometres to reach my school. We had to make this journey every morning and evening,” Nimali recalled about her schooldays.

“We had no permanent physical education teacher at school and no one guided us to do our sports and no one gave us support to select the events and everything was done by us,” she regretted. “At the age of 14, I was placed first at both 800m and 1,500m events at the annual sports meet. But no one thought I would reach this level today,” she smiled.

“I did not have a great idea or continuing with sports at the beginning. Our family was not financially stable and had doubts whether I could continue doing sports and academics at the same time.”

“My parents are farmers and I have two elder brothers and a younger sister and our family income was very low at that time,” she emphasised. “My father suddenly passed away when I was very young and this setback directly affected my family with the entire burden falling on my beloved mother.”

“My mother always wanted me to continue with sports and her blessings gave me a lot of encouragement,” Nimali stressed. I took part in the school sports meet at Wewegama Primary School and won all my events but there was nothing beyond that. However veteran Coach Sujith Abeysekera saw my skills and identified me as a potential Sri Lankan athlete.”

“I saw two athletes at a school meet in 2003. One was Nimali and she was not well built but anyway she ran fast to win the event,” Abeysekera explained.

“I saw her endurance and competition style of the event, which was always very high and it was noted clearly compared to the other two girls.” “I invited both Nimali and her other friend for training but only

Nimali joined in practices and up to date she is following that routine with more dedication,” he revealed.

“I knew Nimali had many difficulties to continue this sport. If we want to see her skills we should fulfil their requirements to get more success.” “Nimali met with an accident a few dates before the 2019 South Asian Games and she was unable to take part in the South Asian Games,” Abeysekera lamented.

“I don’t think Nimali can do anything special at the Olympics. She missed a lot of training due to that accident but the most important thing is for her to run a personal best at the Games.”

“She is already focussed on next year’s Asian Games and I hope Nimali could win a medal at Asian level,” Abeysekera concluded.