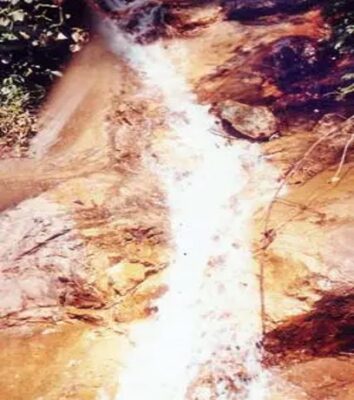 Located in the remote hamlet of Rupaha in Walapane in Nuwara Eliya District approximately 74 kilometers from Kandy, Nil Garunda Gala (meaning Nil Garunda Rock also known as Marble Rock or Serpentine Rock) is a unique rock deposit, considered as the only such rock deposit in South Asia.

Some scholars are of the view that there is no such type of rock anywhere in the world.

Although, Nil Garunda Rock is similar to *Rose Quartz Mountain Range in Namal Uyana, this is a relatively unknown and rarely visited sight.

The uniqueness of the Rock is its bluish green color that glitters due to sunlight. The surface of the Rock is soft and shiny, unlike a piece of granite. According to folklore, this unique “rock is growing” and mending and has healing properties too. Hence, a lot of damage has been caused to the rock as many have touched it with the belief that by touching it nay skin ailments including rashes. According to villagers, when water is poured on the rock, a after a few seconds a foamy whitish substance appears on the rock surface, considered as a treatment for skin ailments, stomach aches as well as snake bites. Hence, apart from its aesthetic attraction, it is considered as possessing medicinal properties too. Villagers of Rupaha believe that this is a gift of nature.

The rock lies underneath the soil and only a small portion of is visible, in places where the Garunda Oya (Oya meaning stream) flows, whereas the rest is below the earth. According to scholars, the area of the rock is approximately 16km2. Hence, the rock deposit is considered as the largest in Asia.

According to villagers, bathing from the waters of Garunda Oya that flows over the rock surface too cures multiple skin ailments such as rashes, hives and welts.

The water flowing from Garunda Oya is used by villagers for cultivation. There is a belief among villagers that crops produced from the water of the stream has high nutritional value and has healing properties. Especially for stomach ailments. 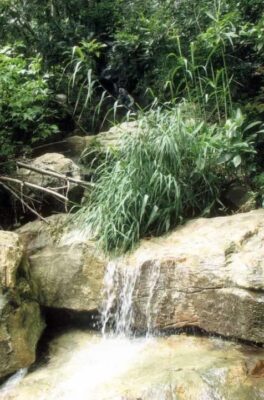 Nil Garunda Rock is entwined in myth and legend. There is a belief that the Rock has its origins in the *Ramayana. According to the myth, King Rawana had hidden Princess Sita in a cave in Walapane. Hence, in protest, she has gone on a hunger strike. Hence, Hanuma (        ) had brought a stone with medicinal properties to cure her ailment. The stone had been with water and her stomach ailment had got cured. When her stomach ailment was cured, the stone had been thrown into the water and it got deposited in the present location. Fact of fiction, the rock is a unique and attractive sight…

There is no motorable road to reach Nil Garunda Rock. Hence, it is necessary to walk approximately two kilometers to reach the location. The trail is moderate with breathtaking vistas.

According to villagers, due to its medicinal properties and beauty, many tourists are in the habit of removing parts of the rock. Hence, villagers in Rupaha have formed a voluntary organization to protect the Rock.

According to gemmologists, once cut and polished, pieces of the Rock and utilized in jewelry, it is similar to moonstone and the value is immense. Hence, it is necessary to preserve this rock, a rare heritage of nature.

Travel along Mahaweli Raja Mawatha over Randenigala and after reaching Walapane, travel up to Nildandahinna. From Nildandahinna, travel up to Kotambe Junction. From this junction, it is necessary to walk approximately 1.5 kilometers on a small by-road. As there is no direction board, it is necessary to seek the services of a guide from the village to reach the location. After traveling approximately 1.5 kilometers on this road, it is necessary to climb a steep flight of steps on the side that leads to the exposed Nil Garunda Rock with Garunda Oya flowing over it.