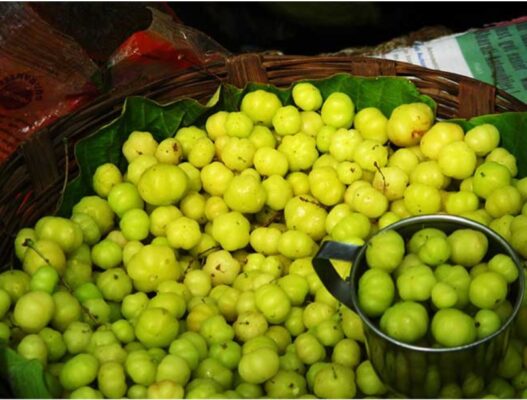 FACT NOT HYPE: A nelli a day keeps sickness at bay! The humble little nelli fruit is the second richest natural source of Vitamin C on the planet and is an antioxidant powerhouse.

The Indian gooseberry tree, Phyllanthus emblica or Emblica officinalis, is considered the most important medicinal plant in Ayurveda, Unani and Siddha, traditional systems of medicine. Whilst all parts of the tree are used medicinally, it is the fruit, known as amla in India and nelli in Sri Lanka, that is considered the most important. In one of the oldest ayurvedic treatise’s dating back to 2 A.D, nelli was regarded as the most potent and rejuvenating fruits supporting anti-aging and longevity. With an astounding 600 – 700mg of Vitamin C per tiny fruit – 160 times that of an apple – nelli is the second richest natural source of Vitamin C on the planet, and with an Oxygen Radical Absorbance Capacity (ORAC) value of 261,500 it is an antioxidant powerhouse. When combined with 2 other fruits, aralu and bulu, in the ancient formula of “Triphala”, its ORAC value is an astounding 706,250 making it the 3rd highest antioxidant on the planet. It’s time that the old adage, an apple a day keeps the doctor away, is replaced with a nelli a day keep sickness at bay. When we hear the word superfood, images of blueberries, acai and turmeric, generally come to mind – nutrient-rich foods considered particularly beneficial for health that regularly feature in top-10 lists of superfoods. Blueberries contain around 9mg of Vitamin C per 100g so you would need to eat around 600g to get your Vitamin C RDI (recommended daily intake). In contrast, one little nelli fruit provides an incredible 1000% of your Vitamin C RDI. On the ORAC scale, nelli scores 56 times higher than blueberries and more than double that of the much-flouted acai berry. Interestingly, the antioxidant activity of nelli is reported to be between 4 and 10-fold higher than Curcuma longa, commonly known as turmeric, one of the world’s top-selling superfoods. If any food deserves to be elevated to “superfood” status, it’s nelli! Phyllanthus emblica, a small to medium-sized deciduous tree native to tropical South East Asia, frequently described as being a reservoir of nutraceuticals with efficacy against multiple diseases, is a known indigenous medicine in 17 countries. Eating nelli is excellent for the functioning of the circulatory, digestive and exocrine systems. There is hardly any disease for which nelli has not been used either singly or in combination with other ayurvedic herbs – the list is endless. Nelli has been the subject of countless scientific studies which have identified the presence of pharmacologically important active compounds, bioactive metabolites, such as alkaloids, phenols, flavonoids, terpenoids, glycosides and saponins. It shows enormous potential for a wide-array of applications:

*Prevention and treatment of hyperlipidemia

grows naturally, in a wide range of soils, in both dry and humid conditions of the dry and intermediate zones. Although it can tolerate moderate salinity, it is best cultivated in a pH range of 6-8 with reasonably fertile, well-drained, loamy soil. It is a versatile multipurpose tree with every part having some value – it provides fruits, medicines, dye and tannins, wood, fuel and green manure.

In India, where nelli is well-established as a rich crop, orchards are intercropped with moringa, guava, and coconut, as well as pulses, vegetable and other medicinal crops. Although nelli is highly nutritious, due to its extremely sour and astringent taste, it is used more in cooked and preserved foods, drinks and Ayurvedic medicines. Whilst there are some small-scale orchards, in Sri Lanka nelli has not been commercially exploited and is generally cultivated as an isolated tree in home gardens. In order to meet its Ayurvedic medicinal demand for nelli, Sri Lanka is estimated to import over 50,000 kg of dried nelli each year.

Nelli is also popular in traditional juices, pickles, candies, shampoos, conditioners and hair oils. There is immense potential for nelli, globally, as a dietary supplement in the form of tablets, capsules and powders, liquid extract and pulp in the nutraceutical, food and beverage, personal care and cosmetics markets.

The global herbal medicine and supplements market is booming and is projected to reach USD 411.2 billion by the year 2026. Rising awareness of nelli as an antioxidant-rich nutraceutical with proven health benefits relating to reduced risk of heart disease, high blood cholesterol levels, blood glucose levels, weight loss, anti-ageing, cell damage, inflammation and immune-strengthening, is anticipated to drive the product demand.

In 2018, the nelli powder extract sector led the global market with a value of USD 22.61 billion and is projected to reach USD 37.2 billion by 2026 whilst the food & beverage segment accounted for USD 12.40 billion of revenue. Currently, Asia Pacific holds the largest market share of about 29.91% with India exporting to Japan, Bangladesh, Nepal, Malaysia, Korea and more recently Germany, Netherlands and the US.

Europe is expected to expand at the fastest CAGR of 5.35% by 2025. Big Herba are always on the lookout for the next superfood. According to the Harvard Institute, elevating a food to the superfood state generally translates into super sales: in the United Kingdom alone, the value of this market exceeds a billion dollars. Consumers are willing to pay more for foods and supplements that they perceive to be healthy with science backing up health claims. Until recently nelli was relatively unheard of outside of Asia.

In Sri Lanka, many consumers appear happy to splurge huge amounts on trendy, imported laboratory-created health and nutritional supplements such as Vitamin C “gummies” whilst the astounding benefits of nelli as a functional superfood, not just an Ayurvedic medicine, appear to be forgotten or unknown by many.

The world, however, is waking up to vast array of health benefits nelli has to offer. It’s only a matter of time before nelli makes it on to the world’s top-10 superfood lists. Science is confirming what has been known in Ayurveda for millennia. There is a real opportunity waiting to happen but is Sri Lanka ready?

Emme Haddon has lived in the West Indies, France, Malaysia, Hong Kong and the UK. She has run various businesses and has set up a successful on-line clothing operation. For the past 7 years she has lived in Sri Lanka where she has been able to pursue her passion for natural medicines. She has a great interest in Sri Lanka’s plants and herbal medicines.