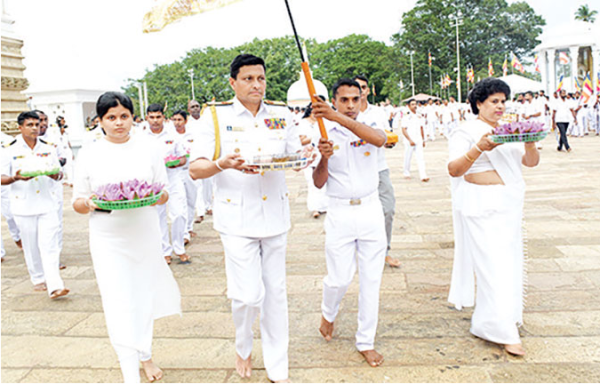 The Kanchuka Puja and Flag Blessing ceremonies organised in connection with the 72nd Anniversary of the Sri Lanka Navy were held under the auspices of Navy Commander Vice Admiral Nishantha Ulugetenne and President of the Navy Seva Vanitha Unit, Chandima Ulugetenne, at the Ruwanwelisaya and Jaya Sri Maha Bodhi, Anuradhapura, on 09 and 10 Nov.

On Thursday, the Commander of the Navy called on Atamasthanadhipathi of Anuradhapura, Venerable Pallegama Hemarathana Thera. Adhikarana Sanghanayaka of the North and North Central Provinces and Chief Incumbent of the Lankaramaya, Ven. Ralapanawe Dhammajoti Thera, chanted Pirith and invoked blessings on naval flags.