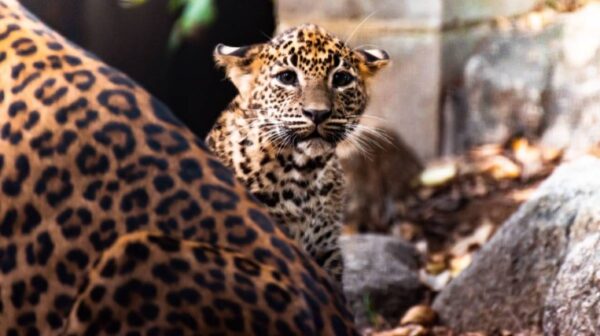 The National Zoo and Aquarium have named their newest members, unveiling the first Sri Lankan leopard cubs to be bred in Australia.

The zoo will officially welcome Asanka, meaning brave, and Chatura, meaning clever, to their family on Friday morning despite the brothers being born on Christmas eve.

The pair have been spotted sneaking around their enclosure, but have spent most of the past seven months in the den with mum Yakalla.

“We didn’t want to announce it earlier because they weren’t always out and visible,” National Zoo and Aquarium and Jamala Wildlife Lodge’s Senior Wildlife Keeper, Katie Ness said.

Their parents Yakalla and Ankesh came to the zoo in 2019, following the death of Sri Lankan leopard, Sheva.

“They are part of an international breeding program for Sri Lankan leopards. We’re the only facility in Australia to hold [them],” Ness said.

“It’s pretty special for us that we’re the only ones to hold them and the first ones to breed them in Australia.”

Ness said she would love to see other Australian facilities hold Sri Lankan leopards and at this stage it is unsure whether the cubs will remain at the National Zoo and Aquarium or be sent to another facility once they are older to participate in other breeding programs.

It is hoped Yakalla and Ankesh will breed again to add to the family in Canberra given the endangered status of the leopards.

“There’s currently less than 80 in captivity and less than 900 in the wild, they are an endangered species,” Ness said.

The survival of the Sri Lankan leopard is threatened due to poaching, habitat loss and persecution.

The cubs are starting to gain confidence and are exploring their enclosure but you might have to patient to spot the cubs for yourself.

“Being leopards they are quite elusive so you do really have to search in the enclosure for them sometimes they’re not necessarily going to be laying out in the open,” Ness said. “One of them with mum likes to lay up quite high in the rafters of the enclosure, up high in a tree. Whilst his brother and dad are a lot more confident and you’re more likely to see them laying visibly for people to see.”

It follows a tough year for the zoo with lockdowns reducing visitors.