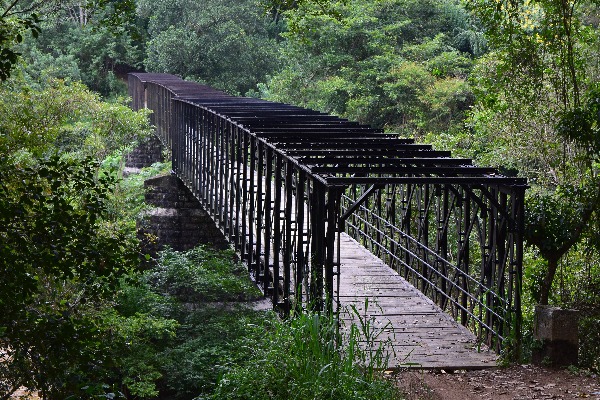 This spectacular mysterious steel bridge is located across Uma Oya at Halaba, a small village located near Uma Oya (Oya meaning stream in Sinhala) in *Badulla in close proximity to breathtaking hamlet*Ella. It is 113 meters (372 feet) long. The bridge is built at the widest points of Uma Oya, approximately 91 meters (300 feet) wide and 7-12 meters (25-40 feet) deep.  The two ends of the Bridge are approximately three meters wide (10 feet) and the mid portion is approximately two meters (8 feet) wide.

The Bridge is considered as a mysterious bridge as there are no roads (there had never been any roads even in the past) except a footpath on either side of the bridge.  This bridge had been installed by British during the British Colonial Era, but the reason for installing this bridge is not known.

According to some scholars, the British must have wanted to build a bridge at Halawatha (*Chilaw) and as the two names (Halaba and Halawatha) were almost similar, they would have installed the bridge at Halaba by mistake.

Another unusual feature of this bridge is the width of the bridge in the middle is narrower than its two ends. The Bridge is built at a height of approximately 30 meters (100 feet) above Uma Oya connecting Uva Paranagama and *Hali-ela.

This kind of bridge had not been built by the British anywhere in Sri Lanka. According to a small plate displayed at the top of the bridge, it had been manufactured at a government plant in 1919. This bridge can be reached when travelling on the road towards *Bogoda Wooden Bridge and passing about two kilometers further. The road ends at Halaba Bridge.

Wooden sleepers have been laid across the Bridge to walk. 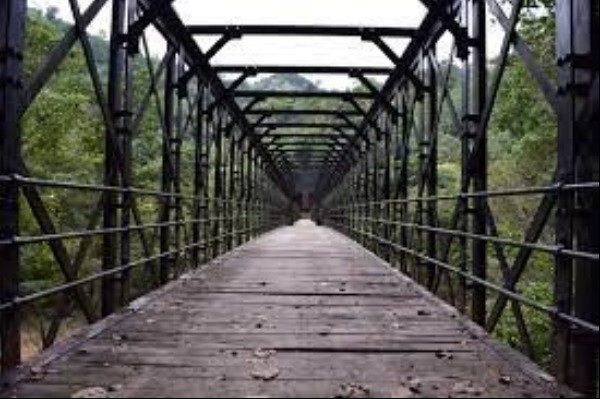 From Hali-ela – Travel along Ketawala Road and go along the road towards the Bogoda Wooden Bridge and thereafter travel approximately two kilometers to reach the Nikagolla – Ketawela Road to the left. This narrow road terminates at the Halaba Bridge.

As the last three kilometers of the Bridge from Hali-ela as well as from Uva-Paranagama are rugged, it is advisable to travel in a four wheel drive vehicle.