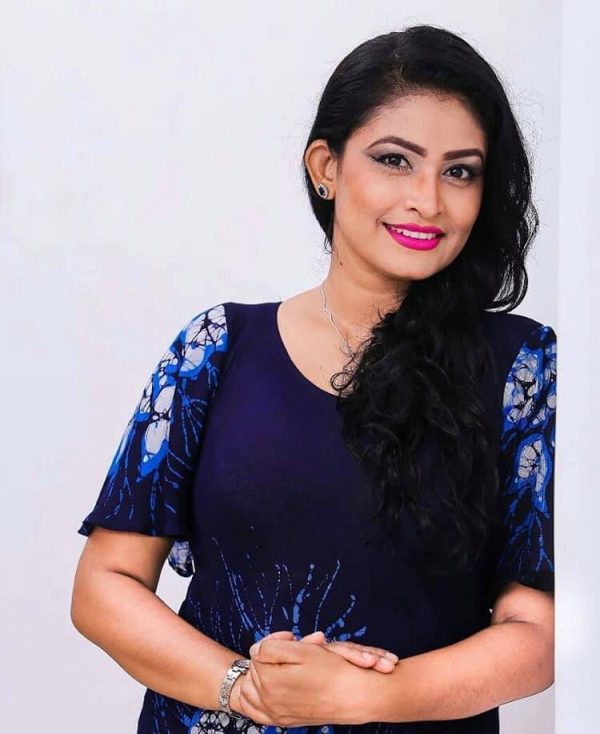 Predominantly the traits of virtuous model, actress cum singer are that  she should possess a ‘voice trained’ vocal voice ,love for music, self-confidence, commitment, patience, passion, determination also the ability to deal with criticism and rejection. All these characteristics are possessed by Muthu Tharanga Sri Nilupuli Peiris who sings in more than one specific musical genre having already recorded her songs too. It needs to be emphasized that Muthu Tharanga has not inherited any singing affiliations from her parents MDD Peiris and Rita Juliet, of course possessing abundance  of innate talent for her achievements in the music arena and acting profession. She has asserted to the media on several occasions that she loves singing more than acting.For the competency she is very often invited to sing on outdoor stages. Her proven talent added to her pleasing image all audiences greet her with gigantic fondness. Though she has many favourite singers, at the helm is Sujatha Attanayake  as her favourite female vocalist,HR Jothipala and JA Milton Perera as her male vocalists.She sings with absolute competency when requested, one example is the song “Okanga Wela’ of late legendary female vocalist Angeline Gunatilleke.When quizzed about her favourite film stars she added as Swarna Mallawarachchi and Kamal Addararachchi duo.

Muthu Tharanga is a native of Kadawatha educated at the Roman Catholic School,Kadawatha and Holy Family Convent Kirimatiyagara Kadawatha .From her school days she had shown talent and flare for singing and acting.She had undergone dancing courses at Channa Upuli dance academy too where she was influenced by her friend Nihar Seneviratne to join the academy. It had been through her influence had become a dancer and a model.She had affirmed that it was her friend who had introduced her to Tele Drama .Her maiden Tele Dram  which she debuted was a mega Tele Drama “Vasudha” in the year 2005 which had been prolonged to years 2006 and 2007 too. The portrays in this mega Tele Drama had influenced her to be invited to many other Tele Drama in the subsequent years. Some of them were  “Meda Gedera”, ‘Suba:, “Tharaka Mal”, ‘Sevwandi’ in the preceding years to become a more or less sought after actress. She had added that there are well over ten completed Tele Drama yet to be screened.Muthu is often invited to many television programs for singing and chats. She had been seen many times on ‘Chat N Music’,’Copy Chat”, “Hitha Illana Tharu’, “Gindare Wage’ ,”Star Kitchen’ and many others where she had impressed many audiences.

Muthu Tharanga is a person possessing a very susceptible and passionate character. Never likes to see people suffer.She never  even invited visits ‘elders’ homes as she cannot resist the agonies they are subjected to, in this context she is  very emotional. She is a person who likes to help others very willingly never with the intention of a return and publicity.She loves gardening , she is in the habit of stepping to the garden every morning to view her plants especially the ‘anthuriums’ flowers blooming.

Muthu Tharanga had got married to her ‘soul mate’ Nishantha Jayawardena who is a landed proprietor owning some rubber plantation in the Ehaliyagoda area.Nishantha had proposed to Muthu when she was very young.Though the love affair had prolonged for many years owing to many constraints had got married sans a wedding reception which most of Muthu’s colleagues had blamed her only have had a ‘wedding photo shoot’.The duo are living in the Wattala area.The duo were blessed with the first child, a son on the 1st July 2021 which had thrilled both of them. Nishantha had liked a daughter as there had been no females in his family but Muthu had loved to have a son.For both Muthu and Nishantha the newly born son is precious/Muthu had lamemted why she delayed her marriage as this thrilling experience she would have adored much earlier.It is learnt that the son named ‘ Tiyon Jayawardena Amupitiya’ is more attached to father who it is learned that does even the cooking at home while looking after him.This allows Muthu to relax a bit at home.Muthu had stated that it is Nishantha who washes and bathe him to voluntarily. Muthu had remarked that during the first ten months or so the duo had to break rest as he never had a sound sleep. But after which the little son had settled to sleep well. This to both has been a real cheerful experience bringing an abundance of happiness..After her child birth Muthu had contemplated on giving up her acting profession but the fans having come to know had pleaded her to continue.She however would be seen often on the small screen as many of her completed Tele Drama’s are lined up for screening.

All her fans and well wishes would wish Muthu Tharanga good health and a very happy family life.